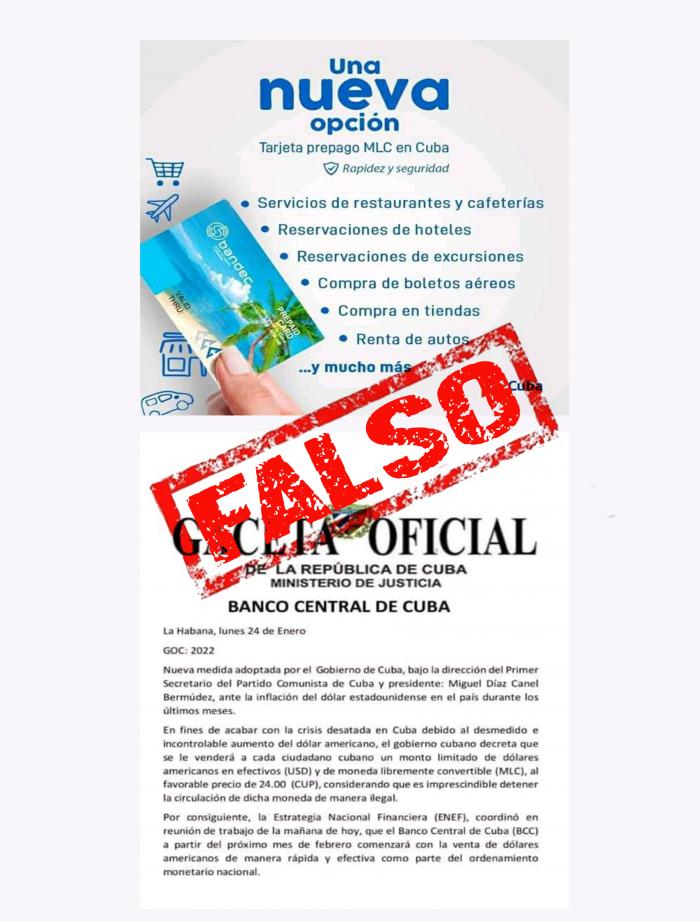 There is a tendency to publish arbitrary and manipulated exchange rates in the media financed from abroad, as well as false information, which has been denied by our media and on institutional sites.

Could someone tell us how many daily transactions are made in Cuba to buy pesos with MLC cards? Of course not, it is CUP data that banks keep secret. Maybe tell us the number of people who, in parks, living rooms of their homes, or wherever they consider appropriate, exchange CUP in cash for dollars? Of course, it is not possible to know this either.

And then, how do you believe those media that claim to know the exchange rate of the dollar, the euro, or the MLC in the street? Are these gentlemen hackers capable of spying on the phones of Cubans? Are they fortune tellers or telepaths? Did they buy a crystal ball that tells them?

Do you know what a self-fulfilling prophecy is? Let me explain: it is a prediction that, once made, is in itself the cause of its coming true. I mean, inflation certainly exists, the exchange rate on the street is different from the official one, but it is not the one that certain sites offer as true either. It becomes real thanks to the fact that many people believe them and take them as such.

It turns out that our economy grew by 2% in 2021.Since November, the borders were opened, tourism started, the pandemic fell to bearable levels, the so-called mules return, and as a consequence of this, which means greater availability of foreign currency and products in the street, the exchange rate does not decrease, as it is to be expected, but rather it becomes violently more expensive.

How there are people getting rich thanks to such a trick. The next move was already a foregone conclusion. For a week the supposed exchange rates were manipulated until they reached spectacular numbers, and then, suddenly, by other means, the lie was circulated -by falsifying the official Gazette- that soon our banks would begin to sell a limited amount of foreign currency to the population.

Can anyone still not see the scam? It is easy to illustrate. Since I am confident that a significant number of people trust me, I say that the exchange rate is, let us say, at 105. Then, given a supposed government announcement, I claim that the rate is going down, and so I take the opportunity to buy dollars at a much lower price. With a simple deception operation, bingo, I fill my pockets. I will never lose because, if this trap does not work, I can always buy more in local currency, where, paradoxically, prices maintain a certain stability, and some even decrease.

I uploaded a post on Facebook with this topic -which was shared in several groups, and also on other social networks-, and there I said: “Now academics and other “experts” will come to justify and show the existence of these alleged rates as a scientific truth”. And I was not wrong. Someone immediately came out to refute me, and to say that a certain colleague of theirs, with a copious curriculum vitae, received an award for having invented a novel method to calculate exchange rates based on Revolico’s sales.

Really, more than 200 years after Gauss, Bayes or Laplace? And what was the name of the thesis? A magic formula for the calculation of prices, based on a population sample of speculators on Revolico? Surely the calculation of this “scientist” would be accompanied by a warning letterhead: “Estimates, I owe you the size and segmentation of the sample, variance and standard deviation, confidence intervals and other elements of seriousness and predictive good faith, because I really do not know the definitive prices agreed “privately”, nor how many products the speculators sold or if they ever sold any”.

We have every genius…! But let’s not stop at the idea that this hoax is intended to obtain illegal profits; behind it lie more sinister intentions. For example, in Venezuela, they used the same modus operandi to destroy the exchange value of the bolivar. They created a site called Dolar Today, based in the United States, which manipulated the rates upwards every day. Thus, together with other economic blockade measures, they succeeded in inducing galloping inflation in that country. From morning to afternoon, in just three or four hours, prices rose extraordinarily: something impossible to explain with sound logic.

Of course, conditions in Venezuela are different from those in Cuba: 95% of the retail trade there -as well as the foreign trade that feeds it- is in private hands. It is not surprising then that we have seen such “geniuses” many times trying to show the “advantages” of privatizing foreign trade for our economy. This is the strategic link they need to change.

In any case, these are illegal practices that generate uncertainty and violate international norms; but respect for legality has never been a virtue that accompanies U.S. governments when they insist on destroying countries that do not bow to their designs.

Have you ever wondered who finances those sites that supposedly inform you of how the MLC is doing today? Do you believe in the goodness of the same people who blockade us and prevent a father from sending remittances to his children, or a son to his mother, from their territory?

Certainly, our country is going through difficult times. To overcome them and reactivate the economy, it is necessary to control the pandemic, and in this -thanks to our vaccines created by true scientists- we have taken solid steps forward.

There is no other solution than to generate goods and services with our own efforts: something that can be achieved with dedication and responsibility in all areas.

There is a tendency to publish arbitrary and manipulated exchange rates in the media financed from abroad, as well as false information, which has been denied by our media and in institutional sites.

It is noted that they intend to establish the same logic of the so-called Dolar Today in Venezuela, inducing an exchange rate that generates an inflationary stampede, by involving part of the commerce and the private sector, which take these exchange rates as a reference.

In Europe there are also antecedents of this practice. The date of September 16, 1992 is known as Black Wednesday, due to the collapse of the pound sterling, which became one of the main reasons why the United Kingdom was unable to adopt the euro. The event ultimately forced Britain to exit the European Exchange Rate Mechanism. The crash of the pound created immense wealth for investors such as George Soros. It also caused tremendous turmoil in Britain’s political landscape. The reason is that they were spending taxpayers’ money in an attempt to keep the pound afloat.

In the case of Cuba, they are also looking for a way to irritate and capitalize on the popular displeasure caused by inflation, in the midst of a scenario of shortages also motivated by the impact of the persecution of the blockade and the crisis derived from the pandemic, in order to generate scenarios of destabilization.