Office of the Attorney General of the Republic reports on the status of criminal proceedings arising from the riots of July 11, 2021 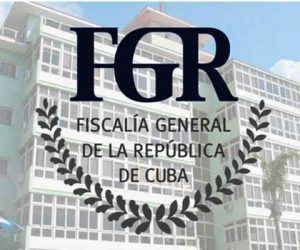 For the Office of the Attorney General of the Republic, it is a duty to continue informing the people and international public opinion about the legal response given to the serious events that occurred on July 11, 2021, which attempted against the constitutional order and the stability of our socialist State.

As has been explained, these events occurred in a particularly complex context of world economic crisis, aggravated by an unprecedented pandemic that took the lives of many Cubans, and the intensification of the economic, commercial and financial blockade by the United States government against our country, which continues to try, without being able to achieve it, to destroy the Revolution.

In a tendentious manner, the manipulations and opinion matrixes continue, which seek to accuse Cuba of human rights violations, trying to delegitimize the criminal proceedings initiated to investigate conduct constituting a crime, in accordance with the laws in force.

The Office of the Attorney General of the Republic, as part of its mission, verified compliance with the constitutional rights and guarantees of due process, and monitored the development of the investigations carried out by the bodies of the Ministry of the Interior, the right to defense was guaranteed, the lawyers provided evidence and had access to the proceedings.

The Prosecutor’s Office received, once the investigation was concluded, 117 preparatory phase files corresponding to the most significant events, with 790 persons charged with acts of vandalism, attacks against the authorities, persons and property, as well as serious disturbances of order. Twenty-one percent of these persons had a criminal record.

Of these, 110 files have been submitted to the courts, with 710 defendants for trial, 69% of them secured with the precautionary measure of pre-trial detention.

Of the total number of defendants in these files, 115 are between 16 and 20 years of age, against whom it was decided to bring criminal action before the courts, due to the seriousness of the acts committed and their proven participation:

– 55 are between 16 and 18 years of age, of whom 28 secured with the precautionary measure of pre-trial detention. Based on the possibilities offered by the law and as a result of the practice of the evidence in the oral proceedings, the acknowledgment of the facts, repentance shown and the condition of students, the Prosecutor’s Office modified the sanction request for 18 of these defendants, for others of lesser severity.

– Likewise, 60 are between 19 and 20 years of age, of which 41 are secured with provisional imprisonment.

The decision of the Prosecutor’s Office to bring the accusation before the courts, in all cases, was based on the evidence provided, among them the declarations of witnesses and victims, expert analysis of videos published in different media and others taken, which allowed the identification of the accused in facts that typify crimes of public disorder, instigation to commit crimes, damages, robbery with force and violence, attack, sabotage and sedition.

The decision to indict for the crime of sedition, although it has severe penalties, corresponds to the level of violence demonstrated in the vandalism that in a tumultuous manner caused injuries and endangered the lives of citizens, officials and members of the forces of order, by attacking them with the use of cutting, blunt and incendiary objects, with the serious disturbance of public order and the deliberate purpose of subverting the constitutional order.

In different localities, official institutions, hospitals, exchange houses (CADECA), commercial establishments and fuel outlets were stoned; many of them, as a consequence of the violence generated, were looted and goods were stolen, causing considerable damage; means of transportation were also besieged, overturned and damaged. 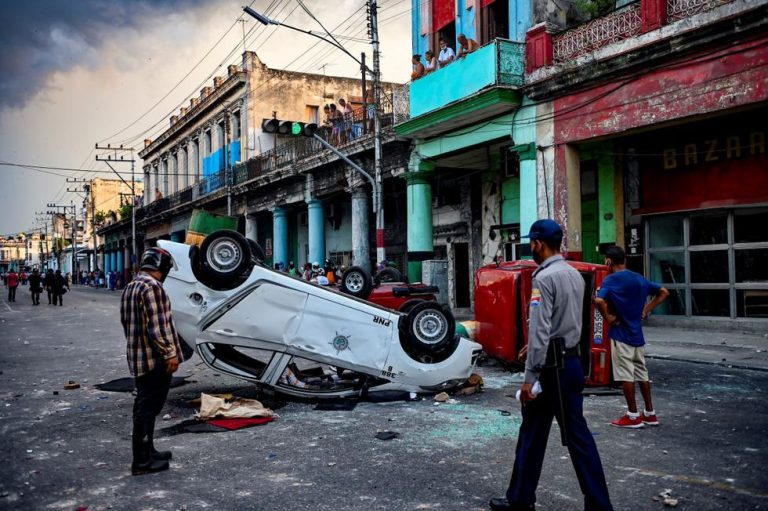 Cuban police cars that were overturned by demonstrators on a Havana street. Photo: AFP / Archive.

The sanctions requested by the Prosecutor’s Office are in correspondence with the seriousness of the facts, the level of participation and the damage caused to society.

As a result of the 84 trials carried out, the Prosecutor’s Office has been notified of 44 sentences issued by the courts, in which 172 defendants who were sanctioned [convicted], had the right to file the corresponding appeals.

In Cuba, minors under 16 years of age are not subject to criminal law. In the investigations, the participation of 27 was accredited, to whom the established legal procedure was applied: 10 were interned in integral and behavioral training schools, for participating, together with adults, in the commission of these acts; 17 were given individualized attention in the school of the National Education System where they are studying.

The Prosecutor’s Office, in accordance with its constitutional function, met with 508 citizens who requested information on these criminal proceedings and processed 238 complaints or petitions. The prosecutors interviewed the persons and verified the exposed elements that were contributed to the criminal investigation. The results were personally explained by the prosecutor to the complainants, offering the legal arguments in each case.

The Attorney General’s Office of the Republic reiterates that it will act in accordance with its constitutional mandate, within the framework of legality, in compliance with due process, the protection of the interests of the State and respect for the rights of all citizens.

OFFICE OF THE ATTORNEY GENERAL OF THE REPUBLIC