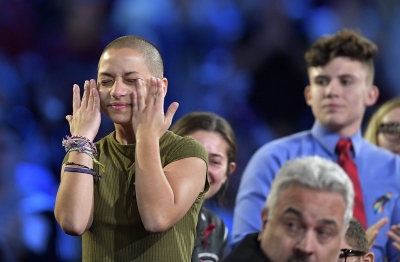 In the form of a small hydrogen bomb, the student Emma Gonzalez’s speech about the tragedy that occurred on Valentine’s Day at Marjory Stoneman Douglas High School in Sunrise, Florida was echoed in the United States.

El Nuevo reporter Martin Vassolo said Saturday that González, 18, with her hair short and bare feet, has planted her words in the middle of the national debate on firearms.

She made her plea -already seen by millions of Americans- in a federal court in Fort Lauderdale, where she criticized President Donald Trump, the National Rifle Association and politicians funded by that organization.

This other denunciation implicitly crucified the system of life that prevails in the United States.

Last year’s seniors had a debate Wednesday with Dana Loesch, spokesperson for the National Rifle Association, about the ease with which an 18-year-old can buy a rifle there, even though the law prohibits her from buying a beer.

My phone hasn’t stopped ringing,” said Gonzalez, who grew up in Parkland and whose father is a Cuban immigrant.

She is part of the NeverAgain movement, which emerged after the shooting, and is one of the organizers of the national march against gun violence scheduled for March 24.
During an interview this Friday with the Miami Herald, the young woman rejected what Trump said about teachers carrying guns.

And she expects lawmakers to make the changes they call for, especially in an election year like this.

Se thanked prominent Hollywood artists, on behalf of her organization, for the donations received and announced that she will return to school next Wednesday.

She finally clarified that at the moment she doesn’t have time to share with friends because she can’t lose a minute in this fight.

All of this helps explain, among other things, why Donald Trump is the most unpopular president of recent years in the United States.

In addition, the evident wear that already surrounds his figure, because it is not enough that sectors of the extreme right support his speech and action.

Perhaps the November elections will give interesting signals in this respect.

#5 Liliana 27-02-2018 10:54
My brave girl, you are not alone, in the United States a people marked by massacres with firearms, and in CUBA a FEU that transmits values to the rest of the world, FORWARD, you cannot deny that your origins are Cuban, PURA CEPA. [pure bred]

#4 Liliana 27-02-2018 10:42
It’s good to see that you’re not in CUBA, my girl, because if you weren’t part of the oldest Federation, the FEU, and then you didn’t have to fight against a wealthy and psychologically unfit president. But force, that the FEU is not there in an active way, but a Cuban woman who carries in her blood the fight for injustice and atrocious crimes.

#2 vile 26-02-2018 14:29
The daughter of a Cuban there has money, but her life is in danger, and if her life is in danger, she wants the money. Cuba, always fighting for just causes, is that it has it in its blood. What irony can’t buy a beer because you are underage, but if you can buy a rifle, a gun with which this society has already reached chaos.

#1 Zarza 26-02-2018 12:14
Animo, who said that everything is lost in this society when there are young people who express themselves in this way with courage and respect for their fellow men.

We’ll see if they can stop this avalanche that has just begun, the politicians of the trump era..