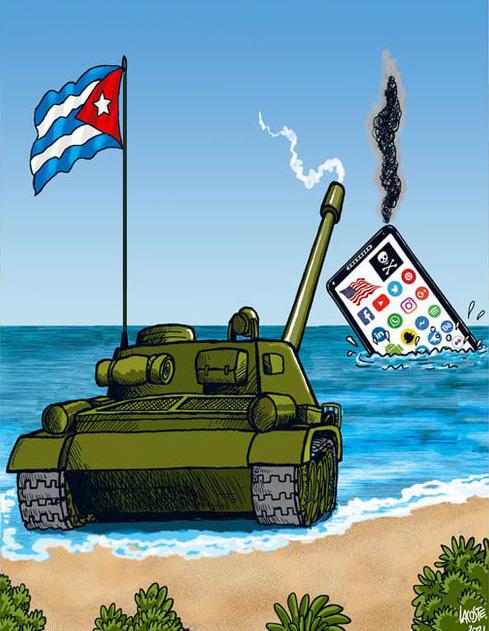 This is how millions are moved to destabilize Cuba

We reproduce the long list that the NED published on February 23, 2021, on its website, detailing the NGOs and foundations that received money to intervene in Cuba during 2020

In 1983, Republican President Ronald Reagan created the National Endowment for Democracy, known by its acronym in English as NED (National Endowment for Democracy). Since its inception, this organization, together with the United States Agency for International Development (USAID), has functioned as one of the economic arms of the interventionist policy of the United States Government, financing non-governmental organizations (NGOs) and foundations, that are disguised with names of very laudable values ​​such as democracy or freedom, but that seek the change of governments that do not subordinate themselves to Washington’s policies.

These interventionist policies have been developed in many countries of the world, especially in those that are located in what the United States considers its backyard: Latin America and the Caribbean.

As detailed on the NED’s own website, in 2020, the National Endowment for Democracy’s LAC program provided critical support to supposedly promote democracy in countries under what they consider to be the most authoritarian regimes: Cuba, Nicaragua, and Venezuela.  In his opinion, two countries in transition, Ecuador and Bolivia, offered important opportunities to reverse previous “authoritarian” legislation on freedom of expression and judicial independence and to encourage citizen participation in electoral processes.

They report expanding what they see as anti-corruption, digital media, and human rights programs, just as the NED reaffirmed commitments to the largest countries in the region: Brazil and Mexico, which for them currently face threats from right-wing populist governments. and left, respectively.

As can be seen, the organization calls Cuba, Nicaragua and Venezuela “more authoritarian regimes”, countries that were openly attacked through the network of foundations and NGOs that this entity has, and defamed by the media. of communication that are also financed through these organizations or other similar ones.

The NED website also reports that, on November 30, 2018, a meeting was held in which the Democratic senator, Robert “Bob” Menéndez, and the Republican member of the House of Representatives, Ileana Ros-Lehtinen, participated. , two well-known activists against popular processes in the region and with links to the most reactionary sectors of Cuban emigration based in Miami.

Along with them, the president of the NED, Carl Gershman, and the administrator of the USAID, Amb. Mark Green, with the aim of promoting alleged leaders in Cuba, Nicaragua and Venezuela.

Gershman took the opportunity to thank Congresswoman Ros-Lehtinen for her unwavering support for the work of “democratic” activists around the world, presenting her with a framed print of the Goddess of Democracy, built in China’s Tiananmen Square, nearly 30 years ago.

Later, NED Senior Director for Latin America and the Caribbean, Miriam Kornblith, participated in a panel with activists from Venezuela and Cuba. Then it is added that “this event brought together US development agencies and legislators with “democratic leaders” from Cuba, Nicaragua and Venezuela.”

Since the triumph of the Cuban Revolution in 1959, the United States has sought by all means to force a change of government on the Island. The criminal economic, commercial and financial blockade that Washington illegally and unilaterally maintains against Cuba, and that has been rejected by the vast majority of the international community in 29 votes in the United Nations Organization (UN) is, without a doubt, the most concrete example of this systematic aggression that the US Government maintains against our people.

The promoters of the blockade have confessed on more than one occasion that this series of measures is intended to suffocate the Cuban people, cause chaos and thus generate a change of government and political system.

During the years of the pandemic, 2020 and 2021, the US administration (first under the leadership of Donald Trump and now under Joe Biden) deepened the blockade with new measures. The entry of medicines, respirators, fuel and economic resources to face the crisis caused by covid-19 was prevented. In this framework, protests were fomented to destabilize the Government and thus try to give the Island the final blow (a new failed attempt that generated discomfort and suffering in the Cuban people, but that did not succeed in breaking it).

In the chapter dedicated to Cuba on the NED’s own website, the list of resources that, during the year 2020, that organization has allocated to promote destabilization is shown.

According to data released by the NED, during that year more than five million dollars (5,077,788) were invested for this purpose, to which must be added the resources provided to NGOs and foundations that do not appear in the Cuba chapter. , but that act against the Island and, also, add the funds channeled through USAID and other similar organizations.

We reproduce the long list that the NED published on February 23, 2021, on its website, detailing the NGOs and foundations that received money to intervene in Cuba during 2020 (with figures ranging from 20,000 to 650,000). Dollars).