Many more images may be viewed here:
https://walterlippmann.com/march-for-our-lives-los-angeles-photos/ 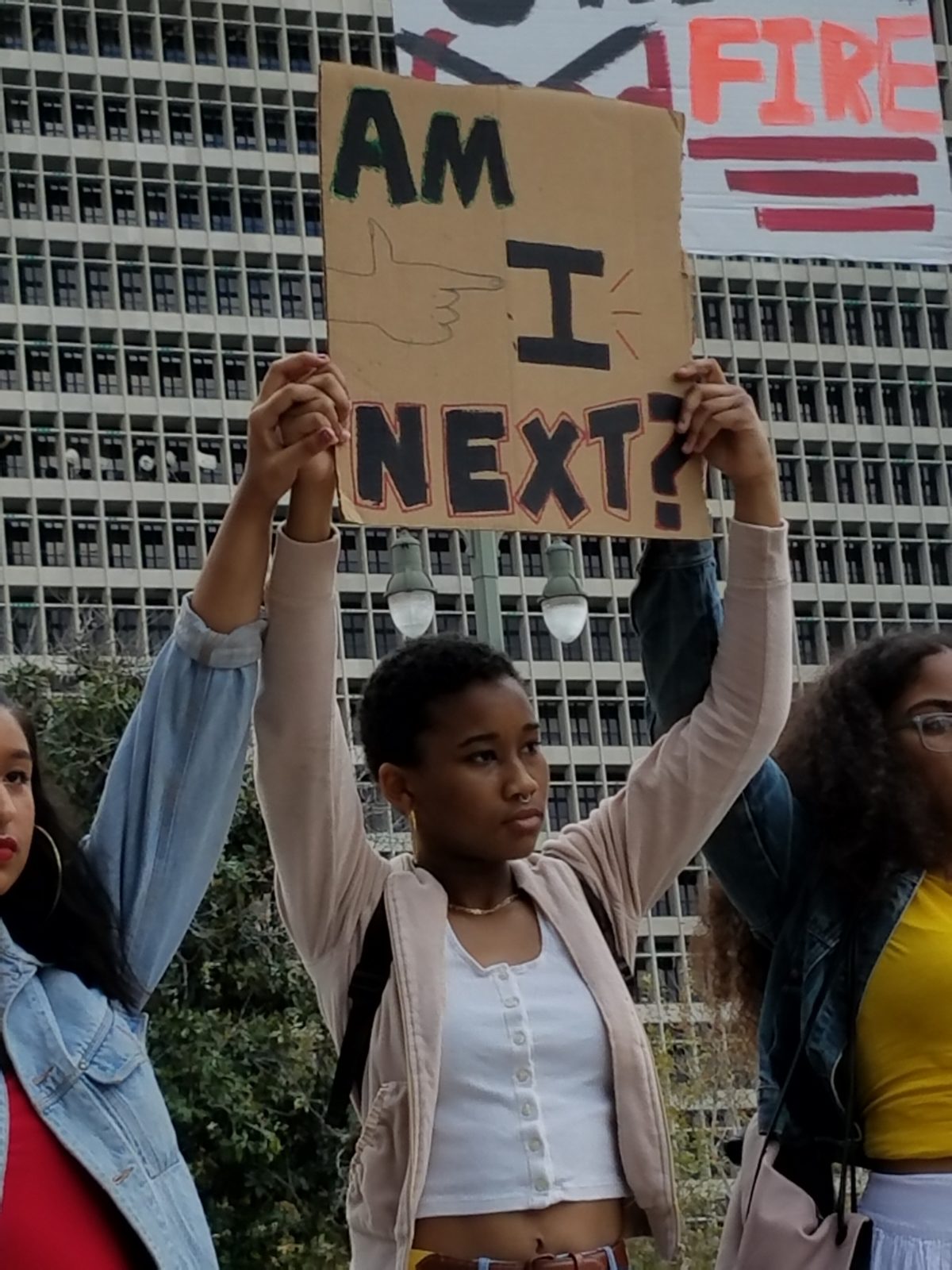 The march was so big it was impossible to tell at any one point how many there were. If I’d had a helicopter, perhaps… Tens of thousands were reported. Here’s the LA TIMES report:

Tens of thousands gather in downtown Los Angeles for March for Our Lives rally
http://www.latimes.com/local/lanow/la-me-ln-los-angeles-march-20180324-story.html

Young people across America are showing extraordinary leadership in the movement to end gun violence — and it was a privilege to join tens of thousands downtown on Saturday for the March for Our Lives.

We may be hearing lot of talk about the power of the Second Amendment, but our young people are showing how powerful the First Amendment makes us — because they are unstoppable when they speak up and speak out. This day will be written about in the history books, and their children will read about a generation that stood up to the gun lobby and said, ‘Enough is Enough’ and ‘Never Again.’
https://www.facebook.com/MayorOfLA/videos/10156240348049806/

We are witnessing a new layer of young people, quite massive, being drawn into activity, many for the first time in their lives. And they’re coming out for a very practical and simple reason. These mass shootings and the media’s promotion of these killings have got students afraid for their very lives, and with very good reason! So these young people are acting from the most universal material interest: the right to be alive.

A culture shift is opening up in the country with popular revulsion against violence taking various interesting and surprising new forms. Though posed, for now, as a response to the school massacres, it represents a broader turn against violence, it seems to me. Look at these pleasantly surprising headlines as examples of the shift:

It’s of course much easier to organize a protest when the authorities are all in favor of what you are doing, as in this case. The cops were on good behavior. I’m sure no one was arrested. A handful of right-wing Trumpsters had a counter-rally, but the protest was well-monitored by its own people. The cops were there, too, but the counter-event was small and basically uneventful. This reflects the evident split among the wealth and powerful who control the United States today.

The dominant mass media (NY Times, LA Times, NPR, etc) are all enthusiastic about these mobilizations. They hope to steer them into support for electing Democrats in the fall. Given the absence of any broad left electoral alternative to the two dominant parties, that strategy probably will prove effective, certainly in the short term.

This kind of comment by some government officials and the enthusiastic reporting we see in the dominant media means that the parameters for discussion of these issues is now broader, much broader than it’s ever been. And that follows the stream of shootings at schools in the US which seem to be on hold, for the moment.

After the ‘March for Our Lives,’ Student Activists Focus on Midterm Elections
Organizers of the movement for stricter gun laws plan to travel across the U.S. and register young voters for November elections
https://www.wsj.com/articles/after-the-march-student-activists-look-to-midterms-1522012947

It’s quite striking, to see the way the dominant media is more and more openly partisan in its support for the Democrats and in its red-baiting campaign against Vladimir Putin and Donald Trump. So who do the Trumpsters watch? I guess FOX NEWS, RUSH LIMBAUGH and the like. I rarely look at such media. But there are millions of people who do get their news through such vehicles, and, as Trump’s election demonstrated, many of them do get out and vote.

Particularly impressive was the care and consciousness with which the organizers made sure to include Black Lives Matter and other Black activists to speak prominently from the platform, in Washington, and in other cities. And they understood the importance of preventing efforts to pit Black against white in the movement against gun violence.

When asked what the biggest mistake the media had made in covering the Parkland students’ work, student leader David Hogg told Axios, “Not giving black students a voice. My school is about 25% black, but the way we’re covered doesn’t reflect that.” (According to the Broward County School District’s website, around 40% of the students who attend schools in the district are black. Individual school statistics were not available for MSD on Broward County’s website.)

There’s a long history of black teenagers fighting for gun control as part of the Black Lives Matter movement’s efforts to draw attention to police brutality. Activists like Kenidra Woods, Nza-Ari Khepra, Clifton Kinnie, and Parkland student Nick Joseph have been working on the issue in Parkland, Chicago, and Ferguson, Missouri. And they have wisdom to share from their time as activists.
https://www.teenvogue.com/story/parkland-survivor-david-hogg-media-not-giving-black-students-voice

While I didn’t see any literature from the MARCH FOR OUR LIVES in Spanish, the event was very favorably reported in LA OPINION, our local Spanish-language daily here in Los Angeles, as well as in HOY, the free paper which the LA TIMES gives out to compete with LA OPINION. Here’s an example, one of many:

Six of the most powerful orators at the March for Our Lives
http://www.hoylosangeles.com/latimesespanol/la-es-seis-de-los-mas-poderosos-oradores-en-la-manifestacion-march-for-our-lives-20180325-story.html

Another element which hasn’t been explored much, in the English-language media, is the ethnicity of the best-known of the young student leaders, Emma González, though it is beginning to be discussed in the Spanish-language media. Some of these profiles are sympathetic, others very hostile.

As well as in the Cuban media at home on the island.

Never again! The students’ cry against guns in the United States!
https://walterlippmann.com/never-again-the-students-cry-against-guns-in-the-united-states/

The pro-gun right-wing is starting to attack this anti-violence movement and its leadership.

No, Emma Gonzalez Isn’t Tearing Up the Constitution in That Viral Video
https://www.glamour.com/story/emma-gonzalez-not-tearing-up-constitution-in-viral-video?

Whatever the reasons, a decline in gun culture in this country can only be a good thing for society. Some stores which have sold guns in the past are beginning to have second thoughts. Some have stopped selling guns. For them, perhaps, because changing attitudes make it bad for business. Examples:

Whatever the reasons, a decline in gun culture in this country can only be a good thing for society.

The historic gun culture (cowboys, John Wayne, etc.) of this country, whose founders and subsequent rulers have kept control through violence since the country’s foundation. It can’t be ended in a day or a week or a year. Profound social change is necessary to make that possible. But every step we can take now is a move in the right direction.

Ask yourself, does any private citizen need an AR-I5 at home? Such a device has nothing to do with self-defense. It’s ONLY purpose is to kill people.

Below you will find some photos I took, mostly at the march on Saturday, a few Sunday morning of some posters I’d picked up at the end, and the front pages of the Sunday NY TIMES and LA TIMES. For years I’ve made it a practice at such demonstrations to collect discarded posters to donate to the Center for the Study of Political Graphics.

It’s a remarkable institution which collects and mounts theme-based exhibitions of political protest posters. I’ve turned over many more since my first donation of about a thousand posters some 20 years ago. You can, AND SHOULD, donate any old posters (young ones also accepted). US residents can even get a tax deduction. More importantly, if you have posters and they are sitting in the garage not being seen by anyone, they could get mildewed and eventually will only be good to be thrown out. Check them out here: http://www.politicalgraphics.org/ 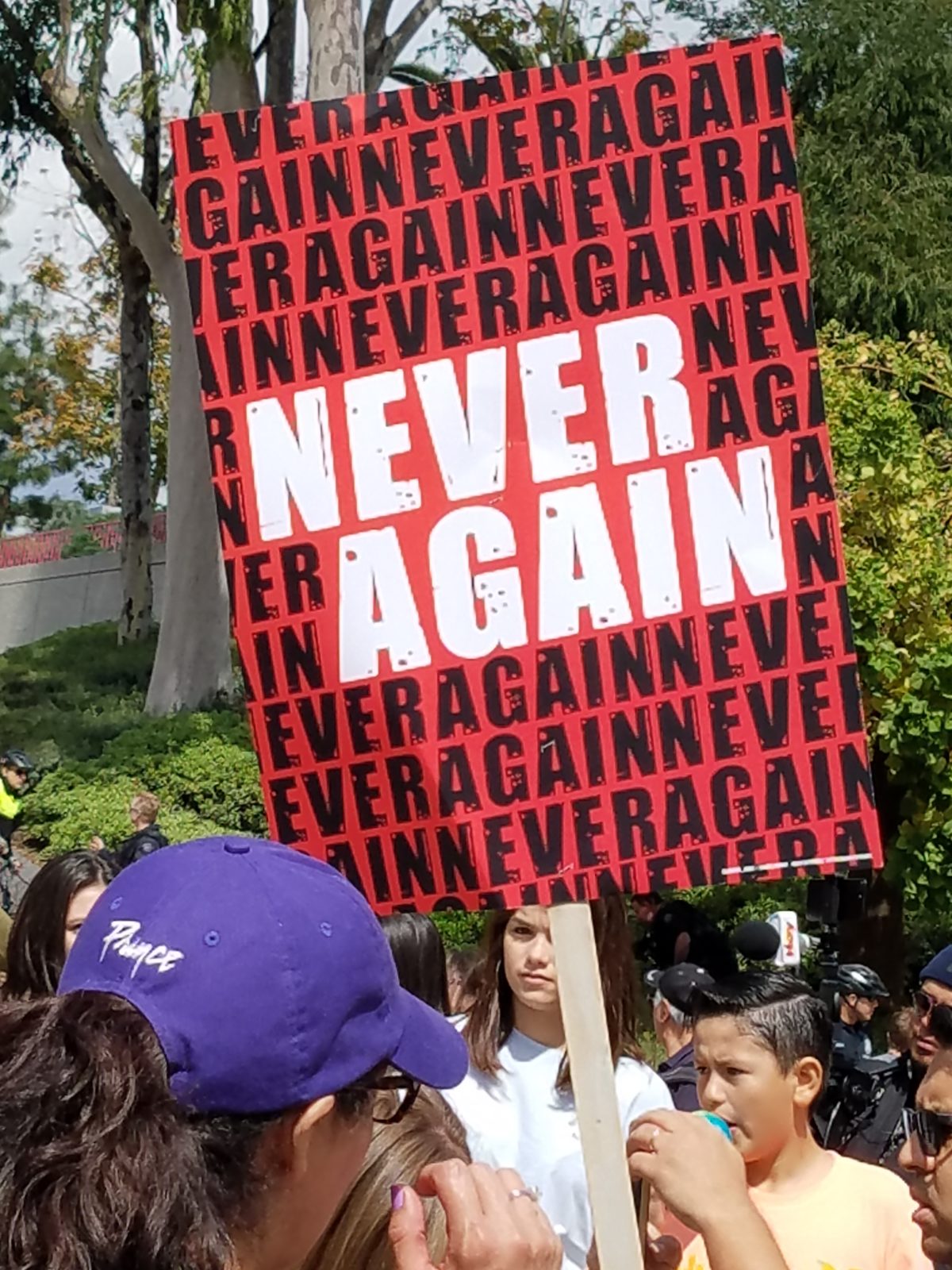