Never again! The students’ cry against guns in the United States! 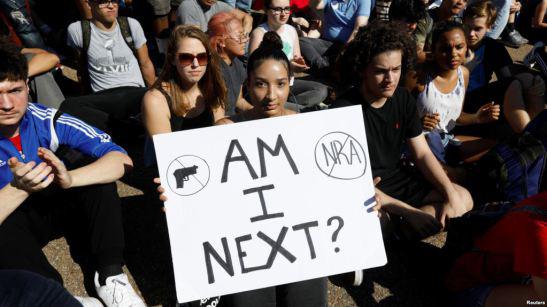 “Am I next? “, reads on this poster of one of the students’ protests against the carrying of arms and the National Rifle Association. Photo: Los Angeles Times

Hundreds of young people, with tears in their eyes for the friends they lost and, also, although it may seem contradictory, for the good fortune of having survived; human chains guarded by the police evacuating the danger zone and Valentine’s Day balloons and teddy bears lying on the ground. Those were the images that toured the world after the massive shooting at a school in Florida that left 17 dead and about 20 injured on February 14.

Those same faces today throughout the United States are demanding “Never Again”  about tragedies like the Stoneman Douglas School in Parkland and for the enforcement of stricter gun control laws.

“No matter how many people die. Legislators in power don’t take action,” Ryan Deitsch, one of the surviving students who met with legislators, told reporters.

Now is the time to get on the right side of this, because it’s not something we’re going to sweep under the carpet,” Emma Gonzalez told NBC News Meet the Press.

But what were isolated appearances in the media and spontaneous displays of pain, has become a whole movement that is already known by the label #NeverAgain.

The young people touched a sensitive fiber of public opinion and began to mobilize in city councils demanding a change in gun control laws.

They soon won tens of thousands of fans on social networks and made frequent appearances on national television. They also received millions of donations from celebrities like George Clooney, Oprah Winfrey, and Steven Spielberg to fund future demonstrations.

A march is being called in Washington for March 24, which they hope will have a national repercussion.

Its impact is greater than previous initiatives, since the voice of young people comes in the midst of a politicized scenario in which the issue of arms is diluted in political conflicts and economic interests that go beyond the traditional parties.

The legitimacy of the lawsuits, which in many cases come from the families of victims or survivors of the massacre, are putting politicians like Florida Senator Marco Rubio, who has received more than $3.3 million from the National Rifle Association (NRA) to buy his votes on the weapons issue, on the ropes.

During a public assembly in Sunrise, Florida, the father of one of Parkland’s victims challenged Rubio to tell the truth and acknowledge that “guns were a factor in his son’s death.” Rubio tried to sneak away and responded that if he believed that a ban on assault weapons “would have prevented this from happening, he would have supported it.> His response was booed by the audience.

Then, student Cameron Kasky told the senator, “It’s hard to look at you and not see the barrel of an AR-15 and not see Nikolas Cruz,” referring to the assault weapon used in the shooting and the 19-year-old perpetrator, who acquired the rifle legally despite a history of violence. “Can you tell me right now that you won’t accept a single donation from the National Rifle Association?”, she added.

Parkland student pressure even reached the White House, where President Donald Trump met with several of them and their parents on Wednesday.

The president was pressured to declare that he will seek “solutions” to the problem.

But so far, some of his ideas are on the way to authorizing teachers to carry weapons in schools and be more severe with the background check of prospective buyers.

That is precisely the vision that the NRA supports to divert attention from the main problem that American students now denounce:”guns are not only a variable of the situation, but they are the key to the problem.”