US Students Strike for Gun Control 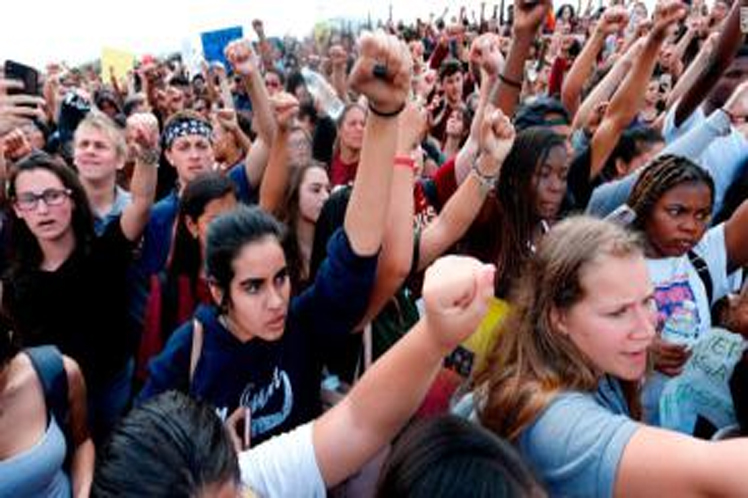 Washington, 14 Mar (PL) Students from many U. S. cities will go on strike today to demand changes in the country’s gun control laws when the first month of the massive shooting in a secondary school in Parkland, Florida comes to an end.

Students from more than 3,100 schools and universities signed up to participate in this Wednesday’s initiative, during which they will leave classrooms for 17 minutes to show solidarity for the 17 deadly victims of the massacre in the southern territory.

The organizers of the event, called by a youth branch of the Women’s March, called for the participation of students from all schools, from elementary schools to universities, as well as parents and teachers.

Although the action is national in scope, student groups and educational institutions are expected to hold a variety of additional events at the local level, including assemblies, class discussions and memorial services.

According to USA Today, students at some schools such as University High School in Tucson, Arizona, will recite the names of the dead in Parkland and make plans to flood local lawmakers with lawsuits against guns.

“My colleagues and I feel that there is no moment more important than this to make it clear that we have had enough armed violence. For too long, it has made us feel insecure in our communities and in our classrooms,” said Dej Dej Foxx, a teenager from that school.

The action of this day follows other demonstrations in the days following the shooting in Parkland, which generated great activism among the survivors of the massacre, who called on politicians in the country to turn their backs on the National Rifle Association.

This Wednesday contrasts the stance of many educational institutions that support planned demonstrations and even encourage students to be active protagonists, with others that warned students with disciplinary actions if they interrupt classes.

This is the case for adolescents in some parts of New Jersey and southeast Texas, who were alerted last month that if they participated in the strike, they would face a three-day suspension.

According to Curtis Rhodes, superintendent of the Needville Independent School District, about 40 miles southwest of the Texas city of Houston, disruptions would not be tolerated because’ a school is a place to learn’, and he said they will impose disciplinary punishments’ regardless of whether it is one, 50 or 500 involved’.

Meanwhile, some districts in the country, such as one in South Carolina, said they will prevent the media from going to school during the protest, in order to discourage youth participation.