Liberty Guiding the People is one of the many posts that has suffered unbridled medieval voracity, typical of the old regime, on the part of the editors of the social network. 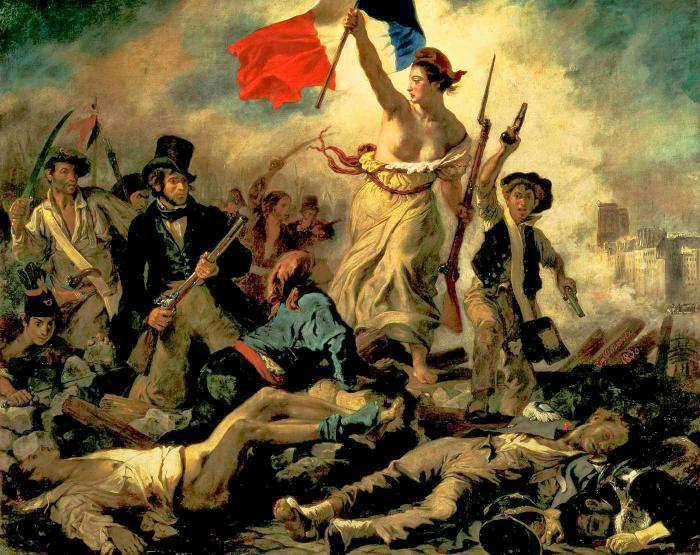 Freedom guiding the people, the work of Eugène Delacroix in 1830, preserved in the Louvre Museum in Paris.

At the beginning of 2018, Jocelyn Fiorina, a French theater director, used Eugène Delacroix’s famous painting, Liberty Guiding the People, to promote her work Shooting in the Rue Saint-Roch. It was not at all a political message per se, much less pornographic, however, the image of the woman with her breast in the air (representing the ideals of the French Revolution), was censored by the social network Facebook.

Much has rained down on the streets of Paris since that July 14, 1789, which so many point to as the beginning of a new era. So much has happened since then, that our historical culture sometimes fails to recognize its origins, especially from the generation of contents that reread that past. Tons of books were written about the French Revolution, especially about that afternoon when Governor Lunay of the Bastille opened the doors of the fortress and surrendered. It is said that the king, buried in the palace, asked if it was a revolt. “No sir, it’s a revolution,” a minister told him.

Until that date, the meaning of the word revolution was linked to the movement of the stars, not even the commotion experienced by England in 1640 was considered as such; however, as the historian Alexis de Tocqueville later noted, the revolutionary current was a force that preceded in centuries to the seizure of the Bastille and that would succeed it forever, accompanying the imaginary and the movement of history.

Hanna Arendt, in her essay Conditions and Meaning of Revolution, points out that revolutionary intellectuals from 1789 onwards, including Americans who participated in the 1776 Revolution against the British Empire, would begin to detach themselves from the notion of “the new” that despite themselves [having been] brought about by the revolution. None of them, obsessed with the purity of the Goddess Reason, wanted to be involved as the architect of a change that also brought with it generalized periods of social terror, as described by Victor Hugo in his classic Ninety-Three.

According to those intellectuals, the revolt actually wanted to take the times back to a foundational and idyllic era, which supposedly existed, in which “the lamb slept next to the lion”. In fact, for them, the revolution was nothing more than a restoration, and thus the hairy ear of counter-revolutionary capital began to be admired in the vision of these early bourgeois historians, who feared the powder keg unleashed by themselves, with the help of the dispossessed and desperate people.

From then on, the bourgeois will begin to validate the king whose head it cut off, will speak of his nobility, as well as the spirit of matron and mother of Marie Antoinette. It is a re-reading of history that goes back to our days, in the figure of the politicians of the system, who celebrate the 14th of July [Bastille Day], but fear the demonstrations of young people who display the “three cursed words”: Equality, Freedom, Fraternity.

It so happens that, quickly, the new bourgeois order took hold of the feudal imaginary, and a new “ancien regime” began to live in modern societies. Bourgeois obscurantism sanctified, above all, private property and from there it built its notion of State, Law and civil society and, therefore, morality.

Mark Zuckerberg must have been a very libertine student, during his time as a brilliant university student, taking the first tests of what was then the most extensive (and dangerous) social network in history. Judging by the number of insubstantial advertisements that fall under the censorship label of “pornography,” we read a certain obsession with the pleasures of the flesh, perhaps due to knowing them too much.

The truth is that Liberty Guiding the People is one of the many posts that suffer the unbridled medieval voracity, typical of the old regime, on the part of the editors of the social network. Facebook’s will to restore was evident during the exchange of messages between the editors and the director of the play. “When I appealed this absurd decision, the representatives of the social network assumed this censorship and said that, even in a 19th-century painting, any nudity is inadmissible…,” Fiorina told the press. The post was only unblocked, after the artist made a second version from the use of Photoshop, placing a poster of “censored by Facebook”.

It is no less alarming that those who monitor the use of the most used platform around the world not only do not know the painting, but also the historical fact and its meaning.

The upheavals of 1789 not only liberated the productive forces and brought a new rule of law, but also established a different morality, in which the body played an active role, as well as the nakedness of those parts that expressed the earthiness of man and woman. Most artists, starting with the French Revolution, would not only paint scenes of it, but would also mix eroticism with freedom, almost as synonyms.

It was the historical change that art needed to get rid of medieval censorship, the artist creates from what he [or she] feels and what he [or she] thinks, in a revolutionary dynamic that was not seen with good eyes either by the current critics. In fact, throughout the nineteenth-century, schools and authors were pondered that today nobody mentions. It was an attempt to restore medieval censorship, to take back that narrative, that of the arts, to the old regime that the bourgeoisie evoked to appease the genius summoned by itself.

No wonder, then, that Facebook, a private company that supports conservatism and still aspires to restoration, censured Delacroix. So far does the desire to restore the social network go that a Venus de Willendorf, a Paleolithic sculpture, was even blocked. Without a doubt, Facebook and Zuckerberg would have been excellent platforms not for restoration, but for the medieval witch-hunt, the Inquisition index or that modern version of totalitarian dystopia, the novel 1984. And there are still those who describe the social network and its publishers as revolutionaries.