Home Women the Third Age of Their Sexuality

Women the Third Age of Their Sexuality

Women and the Third Age of Their Sexuality

Countless myths have historically reinforced stigmas about sexuality after people reach the sixth decade of life and come to consider themselves as adults and older adults. 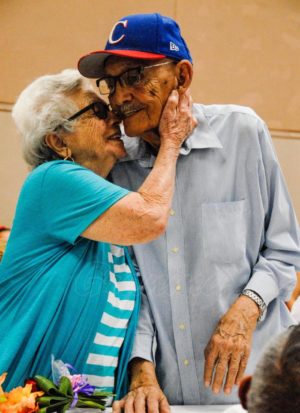 It is essential that the family accept the sexuality of the elderly. Photo: Dunia Álvarez Palacios

Countless myths have historically reinforced stigmas about sexuality after people reach the sixth decade of life and come to see themselves as adults and older adults.

These myths, in the case of women, “conceived under the stereotype of mother, woman as a function of the family”, have hindered their enjoyment of sexuality, and which increases in the so-called third age.

This is accompanied by other myths such as that only in youth you enjoy a good sexuality and that women in old age do not have an active sexual life, and are not interested in engaging in some romantic relationship, said the expert.

When talking about women’s sexuality in old age, many times we only think about the following aspects: fragility and loss of pubic hair; the vaginal mucosa dries up and atrophy, thus diminishing its secretion and facilitating infections; the vulva, labia minora and clitoris decrease in size, there is a shortening and narrowing of the vagina; the ovaries decrease in size, and the cervical mucus is thick, scarce and cellular; the breasts become flaccid as a result of the atrophy of the tissues and the lack of hormonal secretion.

For the psychologist, it is essential to take into account what older women think and what is meant by geriatric sexual health.

The latter is “the psychological expression of emotions and commitments that requires the greatest amount and quality of communication between partners, throughout existence, in a relationship of trust, love, ability to share and pleasure, with or without intercourse,” according to specialized literature.

This concept is fundamentally based on an “optimization of the quality of the relationship” (more than in quantity), said Dr. Torres Rodriguez.

For the interviewee, several elements cannot be lost sight of: self-perception of sexual attractiveness is a very important social factor.

“The climacteric anticipates the “feeling of old age” in many women. A large number of women mistakenly believe that once their reproductive function is over, sexual function is also lost,” she said.

Added to this is the fact that older people find it very difficult to consult medical science professionals, because there is a general lack of training in areas of sexuality and, even more so, in the sexuality of older people. Hence, the role of health professionals in general and family physicians, as well as specialists in Geriatrics, as key health providers at this stage must become essential.

It is essential that the person is cared for from a holistic point of view and that, for example, sexual dysfunctions are taken as seriously as high blood pressure or diabetes.

Studies carried out in our context have shown that, contrary to what many people think, a considerable part of dysfunctions in old age have their origin in ignorance, false expectations, feelings of being handicapped and other phenomena. These, although they play an important role in the appearance of dysfunctions, are relatively easy to combat and prevent by means of adequate information and discussion.

According to epidemiological studies, the fact of losing one’s partner is one of the most important determinants of the cessation of sexual activity.

“Traditionally, there has been a strong social tendency to consider negatively the establishment of new affective relationships, and even new marriages in widows, which further limits their sexual activity,” said the psychologist.

In general, it is essential that the family accept the sexuality of the elderly, consider the possibilities of second and third marriages, and respect the privacy of the parents and grandparents.

Older women’s sexuality as an indicator of quality of life, especially perceived quality of life, requires a better understanding of all factors affecting it. One of the most important is mourning, for the body, for sexual and social losses.

But what does old age really imply or limit? On the subject, the experts William Masters and Virginia
Johnson, who are dedicated to the study of human sexual response, argue that the elderly can have sex at any age.

An international survey of 1126 elderly people, conducted by the University of Michigan, showed that 30% were sexually active and showed that sexual dysfunction is not inherent in aging.

Hence the need to influence the understanding of the sexual changes that occur in old age and the negative influence that myths and beliefs have on the enjoyment of sexuality in women over the age of 60. “Sexuality is not only for young people,” explains Dr. Beatriz Torres Rodríguez.

Promoting knowledge about the rights of the elderly to enjoy their sexuality and promoting public policies that do not only correspond to the health sector is essential. The idea is to encourage spaces for socialization, recreation and growth in these stages of life, without neglecting family education in these areas.