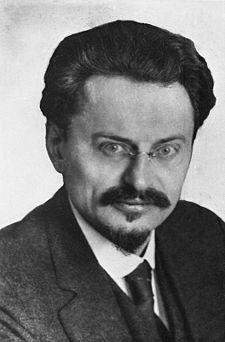 Biographical data
He was born in Yákovka (Ukraine) on November 7, 1879, into a Jewish family of farm laborers.

Studies
He studied in Odessa and Mykolayiv, standing out for his intellectual abilities.
He studied law at the University of Odessa.

He began in politics in the year 1896, joining in the populist circles of Mykolayiv, although soon he joined the Marxist movement. He was a profound student of Marxist theory, to which he contributed developments such as the theory of permanent revolution.

In 1897 he founded the Workers’ League of Southern Russia, whose activities against the tsarist autocratic regime would result in his being arrested, imprisoned and sentenced to exile.

Exile
He was arrested several times and banished to Siberia. Escaped exile in 1902 and moved to Europe adopting the pseudonym of Trotsky (name of a jailer who had guarded him). During his stay abroad, he joined Vladimir Lenin, Julius. Mártov, Gueorgui Plekhanov, and other members of the Russian Social Democratic Labor Party (RSDLP) who edited the newspaper Iskra (La Chispa).

When the second congress of the RSDLP was held in London in 1903, it was marked by differences with Lenin and the Bolsheviks and he joined the Mensheviks, without establishing strong ties.

When the Revolution of 1905 failed, he was deported back to Siberia and escaped once again in 1907 and dedicated the next decade to defend his ideas, being involved in frequent ideological disputes.

When the Russian Revolution began in February 1917, Trotsky was in New York , collaborating on a Russian newspaper, so he moved to Russia and joined the Petrograd Soviet, becoming directly involved with the Bolsheviks in the revolutionary process, becoming part of the Central Committee of the Party.

The return to Russia
After crossing several countries coming into contact with the foci of revolutionary conspirators, he moved to Russia as soon as the Revolution of February 1917, which overthrew Nicholas II, broke out.

During the first stage of the Russian Revolution, he became a trusted man of Vladimir Lenin, participating in several missions, including the negotiated withdrawal of World War I (1914-1918), through the Treaty of Brest-Litovsk (1918)

He played a central role in the conquest of power by Lenin, was responsible for the taking of the Winter Palace by the Bolsheviks.

Then he became Commissar of War (1918-1925), a position from which he organized the Red Army under very difficult conditions and defeated the so-called white (counterrevolutionary) armies and their Western allies (1918-1920) in a long civil war.

Lenin was forced to withdraw from political life in May of 1922, after suffering a stroke asa consequence of an assassin’s attack. After Lenin’s death, he was removed from his position as Commissar of War in 1925 and expelled from the Political Bureau in 1926.

Exile
Stalin sent him into exile to Central Asia in 1928 and was banished from the Union of Soviet Socialist Republics (USSR) in 1929. He spent the rest of his life making public his criticisms of Stalin.

He lived in Turkey, France, Norway and finally in Mexico, invited by General Lázaro Cárdenas, president of the country, in 1937. He initially lived at the home of Mexican painter Diego Rivera and his wife Frida Kahlo .

Death
He was subjected to several attacks in almost all the countries and cities where he lived in exile, including the one carried out by under the orders of the Mexican communists.

Ramon Mercader, a Catalan trained by Soviet intelligence and sent from the USSR, entered the circle closest to Trotsky and carried out his. Mercader attacked Trotsky in the residence he occupied in the Mexican city of Coyoacan, on August 20, 1940 with a piolet (mountaineer’s axe), which sank in his head; But he was able to react and asked for help. Trotsky passed away the next day.

Outstanding works
He wrote numerous essays, an autobiography, My Life (1930), The History of the Russian Revolution (3 volumes, 1931-1933), The Revolution Betrayed (1936), and articles on major current issues of his time (Stalinism, Nazism, fascism or the Spanish Civil War).

His works were also highlighted:

Contributions
He is considered by many one of the most important Marxist theorists of the twentieth century, especially in relation to the theory of revolution in the imperialist epoch: his theory of permanent revolution.

As a journalist and historian, he was recognized as one of the greatest political writers of the century. Also emphasized contributions in the field of art and culture.

5 years ago Translationsbio, Leon Trotsky183
The Drama of the St. Louis in Havana, May 1939Clinical Record of the Murderer of Leon Trotsky