Home Díaz-Canel on racism at the UN

Díaz-Canel on racism at the UN

Díaz-Canel at the UN: The peoples of the world will always be able to count on Cuba’s contribution (+Video)

Speech by Miguel Díaz-Canel, First Secretary of the Central Committee of the Communist Party of Cuba and President of the Republic, at the High-Level Meeting during the General Debate of the 76th Regular Session of the United Nations General Assembly 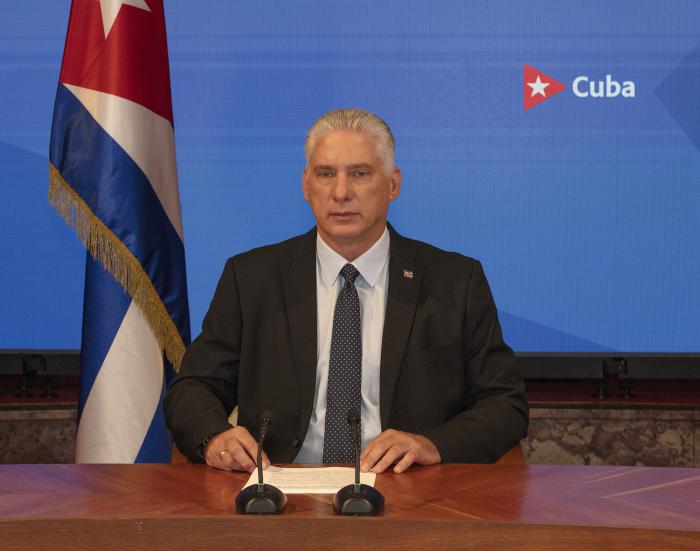 The world should be ashamed to observe the poor scope of universal agreements that were once the hope of the excluded and the dispossessed.

Twenty years after the adoption of the Durban Declaration and Program of Action, the objectives set out in those documents for the fight against all forms of racism, racial discrimination, xenophobia and related intolerance have not been achieved.

Developed capitalist countries try with demagogic speeches to divert attention from their historical responsibility in the enthronement and persistence of these scourges and their debt to the peoples who are victims of the slavery to which they were subjected. There is a lack of political will on the part of these same countries to make the promises of the Durban Declaration and Program of Action a reality.

The multidimensional crisis generated by the COVID-19 pandemic has exacerbated the structural inequalities and exclusion inherent to the prevailing unjust economic order, which subjects the poor, those of African descent or migrants to all kinds of discrimination.

In Cuba, beyond skin color, African, European and Native American genes are all mixed . We are one people, Afro-Latin, Caribbean, mestizo, in which several roots were fused to forge a unique, vigorous trunk, with its own identity, open to the world from a sense of belonging in which cultural values are assumed from an ethic of solidarity.

With a colonial slave-owning past, the black and mulatto Cuban population suffered for centuries the consequences of a system in which racism and racial discrimination were part of everyday life. Only with the triumph of the Cuban Revolution in 1959 did a process of radical transformations take place that demolished the structural bases of racism and eliminated institutionalized racial discrimination forever.

The advocacy of hatred, the promotion of intolerance and supremacist ideas on the basis of national, religious or ethnic origin and xenophobia are alien to the political, social and economic life of the country.

The new Constitution of the Republic of Cuba ratified and strengthened the recognition and protection of the right to equality, as well as the prohibition of discrimination.

The Magna Carta provides that all persons are equal before the law, receive the same protection and treatment from the authorities and enjoy the same rights, freedoms and opportunities; but laws and decrees are not enough to erase centuries of discriminatory practices in societies.

To make further progress in the emancipating work of the Revolution, the National Plan against Racism and Racial Discrimination was approved in November 2019, as a government program that favors the most effective confrontation of racial prejudice and social problems that still exist in our society.

Cuba’s commitment to the eradication of racism transcends its borders. Thousands of Cubans supported national liberation movements in Africa and against the opprobrious apartheid regime. Thousands of others have contributed their solidarity aid, particularly in the area of health.

We will not relent in our pursuit of social justice. The peoples of the world will always be able to count on Cuba’s contribution so that the commitments we assumed 20 years ago in Durban become a reality.

[1] The Cuban Genetic Map, 2015 Cuban Academy of Sciences Award, indicated that on average, without distinction by skin color, genetic crossbreeding marked the presence of European ancestral genes in a proportion of 73.8%, 16.8% of African origin and 9.4% of genes of Native American origin.