Cuba bets on the gradual opening of its economy

The Council of Ministers analyzed, during its most recent meeting, the performance of the economy at the end of August and other important issues to maintain the country’s vitality. 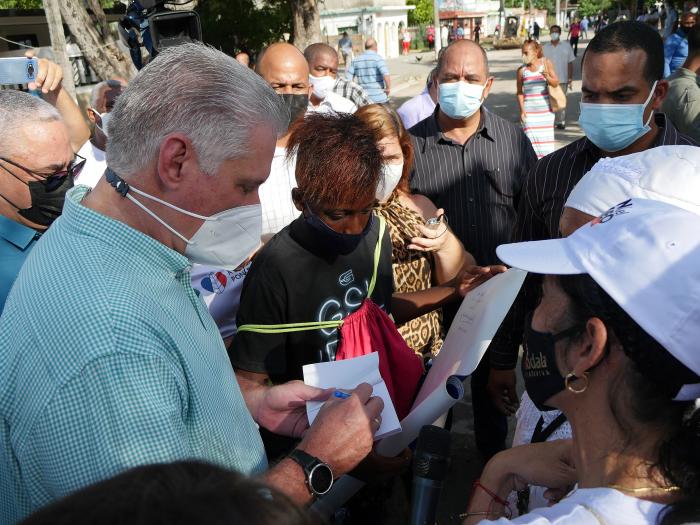 All the power that is exercised in Cuba is done through the people, with the participation of the people to solve the problems of society, Diaz-Canel stressed in the most recent Council of Ministers. Photo: Estudios Revolución

The tightening of the US government blockade, the international economic crisis aggravated by the COVID-19, and the epidemiological situation itself, determine that the Cuban reality at the beginning of the fourth quarter of the year continues to be complex.

However, Cuba is committed to the gradual opening of its economy, which should have a favorable impact on productive activities. This was stated by the Minister of Economy and Planning, Alejandro Gil Fernández, when presenting a report on the performance of the economy at the end of August, at the most recent meeting of the Council of Ministers, chaired by the First Secretary of the Central Committee of the Communist Party and President of the Republic, Miguel Díaz-Canel Bermúdez, and led by the member of the Political Bureau and Prime Minister, Manuel Marrero Cruz.

As a favorable element amidst the complexities, Gil Fernández defined the growth of employment, which distinguishes Cuba. “In many countries, the tendency has been to unemployment, to the cheapening of the labor force,” said the also deputy prime minister. Together with the fight against the epidemic, he stressed, we generate jobs and we are going to generate more with the improvement of the economic actors; the opening of gastronomy, services, tourism and the non-state sector.

So far, he said, 203,733 people have sought employment at the municipal Labor and Social Security departments, of which 138,656 were employed and 5,440 were linked to qualification courses to access a job.

Of the total who have been employed, he highlighted, 36% are young people under 35 years of age. The same percentage corresponds to women.

Referring to the main food balances in the national production, he pointed out that at the end of August, rice, corn, beans, milk and egg production, as well as beef and pork were out of compliance.

As for the vegetables, even though the demand is much higher than the supply, he pointed out that in August there was a greater quantity of stockpiled products than in previous months. This trend continued in September.

He referred to the behavior of energy carriers in the country. In August, he pointed out, the actual generation of electric energy was well below the foreseen plan, which meant a non-negligible cost in the economy and productive activities, with the objective of reducing the effects on the population.

Gil Fernández stressed the need for greater initiative and creative work, as well as “to take more advantage of the measures that the Government has been approving in the last few months to grant greater autonomy to the socialist state-owned company”.

These are measures -he valued- that must be taken advantage of in order to be able to move forward with greater efficiency in the state-owned enterprise. “A productive effort is required in all sectors to achieve, in the remainder of the year, the maximum possible economic growth”.

Complying with the design to control the pandemic, and with the economic measures adopted, Gil Fernandez assessed that “we can be in better conditions to, with an additional effort, in the fourth quarter try to aspire to the highest possible economic growth this year and start better 2022”.

Regarding the challenge that the reopening of tourism on November 15 means for Cuba, the Prime Minister considered that “it is an event that is already gaining strength at the international level”.

This is an issue -he reflected- that will have an impact on the economy; we are convinced that it will boost the economy, but for that “we all have to contribute. It is not only a tourism issue, but no sector is also unaffected by this event in the country”.

Among other matters, the highest government body approved the new Portfolio of Opportunities for foreign investment in the country, consisting of 678 projects, 175 more than in the previous one.

In presenting the subject, the Minister of Foreign Trade and Foreign Investment, Rodrigo Malmierca Díaz, explained that, in order to prepare it, it was based on the criterion of the greater importance of foreign investment in the current economic situation.

At this moment, he assured, we have 429 projects with approved directives, ready to be negotiated, and 56 in the Mariel Special Development Zone. The projects respond to strategic axes of the National Economic and Social Development Plan until 2030, as is the case of productive transformation and international insertion; natural resources and the environment; infrastructure; as well as human potential and science, technology and innovation.

According to him, from the territorial point of view, the Portfolio is distributed among all the provinces and, for the first time, the food production sector is the most represented.

The Prime Minister drew attention to the need to promote foreign investment in a more dynamic way and always preserving our sovereignty. “It is necessary to give it the priority that this matter carries at the higher levels of management, each one with the role that corresponds to him.”

At the meeting, the Minister of Transportation, Eduardo Rodríguez Dávila, presented a report on the results of the Port-Transport-Internal Economy Operation, in the first semester of the year.

According to the information provided, even though all the missions were secured during the period, “there are still insufficiencies, both of a subjective and objective nature, which will be the focus of attention in the last months of the year”. Many of them, he explained, will be solved as funding and resources become available.

The Prime Minister emphasized that, in the midst of the complex situation, “it is more necessary than ever to get this operation right. It has to work properly; it cannot be an obstacle for the distribution of the goods that we are able to bring in, to get stuck inside the national territory, he said.

At the meeting, which was attended by Esteban Lazo Hernández, president of the National Assembly of People’s Power; Salvador Valdés Mesa, vice president of the Republic; and Roberto Morales Ojeda, secretary of Organization and Cadres Policy of the Central Committee of the Party, all members of the Political Bureau, the provincial scheme of territorial organization of Villa Clara was approved.

Likewise, the status of accounts receivable and payable in arrears, in litigation and court sentences at the end of June was analyzed; the fulfillment of the integral plans to confront urban illegalities by the governments, agencies of the Central State Administration and higher organizations of Business Management; and the progress of the Government Scholarship Program in other countries.

The Council of Ministers was also informed about the approval of the first micro, small and medium-sized enterprises (MSMEs), as well as non-agricultural cooperatives, after the regulations supporting them came into force on September 20.

THE KEY LIES IN POPULAR PARTICIPATION

We are obliged to design, among all of us, a system of popular control, aimed at confronting all the deviations that may exist in the fulfillment of the socialist legality, in the confrontation of corruption.

In this idea, considered the President of the Republic, lies the key on how we have to face the facts of corruption. His reflections were motivated by the presentation made by the Comptroller General of the Republic, Gladys Bejerano Portela, who presented to the Council of Ministers information on the fulfillment of the directives and the plan of control actions of the National Auditing System in the first semester of the year.

It is still insufficient, it was pointed out during the meeting, was the understanding, and the attention to the Policy approved for the improvement of the auditing activity and the urgency before the changes and challenges ahead. It is necessary to ensure the exercise of control and prevention as a method of management, exercised systematically in the development of all processes and not occasionally, or after they are concluded, as is generally the case. Control is the responsibility of those who exercise management; it must always be present.

The Head of State highlighted the political and governmental will that has historically existed in the Revolution to solve the problem of economic control and, in general, of everything that has an impact on efficiency and good performance, on the transparency of all our economic and social processes, as well as in the fight against corruption. On this, he said, it is necessary to look at the thinking of the Commander in Chief [Fidel] and the Army General [Raul]

Since the creation of the Comptroller’s Office, he recalled, work has been unleashed to create an adequate control environment and to advance in it. However, “the results are still insufficient and fill us with dissatisfaction,” he said.

After a broad reflection on our system of government and the leading role of popular participation in all scenarios, the President said that, on the basis of elements related to the defense of popular power, we can reach an analysis of how to make further progress in the fight against corruption.

All the power exercised in Cuba is done through the people, with the participation of the people to solve the problems of society, and this is one of them, he said. Hence his emphasis on there being a direct relationship in how the people participate in this battle. “I believe that by facing this with the people we are going to advance more.”

1 year ago Granma, Translationsblockade, food, tourism0
Díaz-Canel on racism at the UNReason is our shield