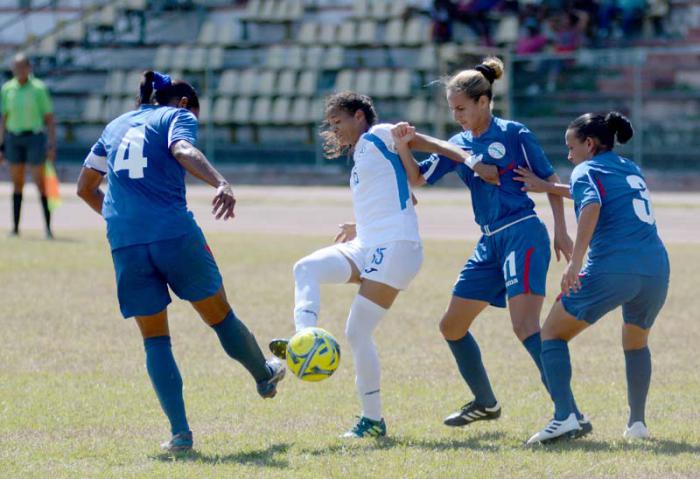 Cuban women will be looking for a ticket to the 2018 Caribbean Cup in May. Photo: Ricardo López Hevia

The coach of the Cuban women’s football team, Renier Bonora Peñalver, says he is satisfied with the progress of his students in recent years.

The Camagüeyan strategist is an “old-school” man who has always been known for his commitment to the progress of his students, beyond the 90 minutes of each game and training practices.

“I say that I am not happy because there is always work to be done, to emphasize technical elements. These young women have a great future, they just need to believe it. We as coaches put all our knowledge to work for them, and they can do more,” said the mentor, who has been at the helm of the Cuban cast for three years.

In an interview with this newspaper, Bonora Peñalver said that, despite being in charge of a young squad, in recent years there has been sustained growth in Cuban women.

“The way we move on the court, with or without a ball, is very different from how we did it a couple of years ago. The players are already playing plays that we made during the training sessions,” she said.

This gradual evolution has led coaches to consider starting to implement the 3-4-3 game system, to the detriment of the 4-3-3-3 system they currently use. This change is due, according to Bonora Peñalver, to the fact that several players have refined their technique, both in defense and attack.

“Today’s philosophy is very different from that of the past, when we were looking for women who were fighters and who did a great deal of sacrificial work on the ground. At the moment we prefer them to come in with a good technique, to instill in them a way of playing together.

For Cubans, the immediate goal is to qualify for the 2018 Caribbean Cup, so in May they will be looking for the only ticket in the Dominican Republic, where they will have to compete against the Turks and Caycos Islands, Puerto Rico, Anguilla and the quisqueya hosts.

“We can take that quota. We played a couple of friendly matches two weeks ago against Nicaragua, who are one of the strongest opponents in the Central American area, and our players were in good physical condition, with several chances on goal.