In Santiago, 17 women serve as sector chiefs of the National Revolutionary Police (PNR) 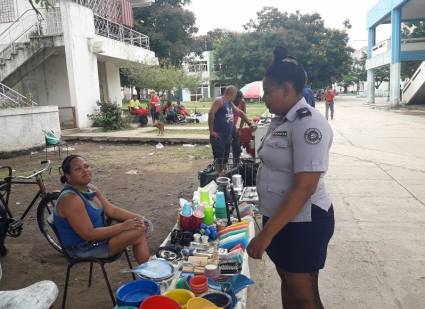 “If women build, how can we not be able to maintain order in the neighborhoods,” says First Lieutenant Evelyn Blanco Cadalzo, in charge of sector No. 102, in the Jose Marti Urban Center Author: Jose Angel Morales Published: 18/07/2020 | 10:24 am

SANTIAGO DE CUBA. For eight years now, the days of the young first lieutenant of the National Revolutionary Police (PNR), Evelyn Blanco Cadalzo, have had the duration of the surrender, the imprint of the sense of duty.

That’s just how long since she graduated from the former Interior Ministry (Minint) Hermanos Marañón University, as a law graduate specialized in public security. Since then, she has been the head of Sector 102 of the First Station, popularly known as Micro Nueve, in the José Martí urban center.

She has under her jurisdiction Blocks A and B of the José Martí Sur Popular Council, a community where she was born and has lived for her 27 years. It’s an area which, although not complicated in terms of criminal potential, is a recipient of criminals from other parts of the city who come there to commit offenses and crimes, such as robbery with force and theft with violence.

Preserving order in the place where you were born, where you have your friends and everyone knows you can be difficult if you are not clear that when duty calls, it is the first thing to be maintained: “You have to have character, set limits well and show that things done badly should not be seen by anyone anywhere in the world.

At the beginning of the year, this novel member of the PNR showed her courage and professional stature by getting involved in what could be considered the most notorious case she has ever been involved in: the capture of an escaped rapist, whom she had to protect from an angry mob with no other shield than her own body.

Hours earlier, as part of her operational work, she learned of the occurrence in her popular council of the reprehensible act against an eight-year-old girl,. Her first admitted thought was for his three-year-old daughter, Hasly Emely Estiven Blanco. She even thought about what she would do to that monster if she had it in front of him at that moment.

Later, chance gave her the opportunity to support her partner in charge of the investigations in the case, first sub-officer Luis Salmón Borrero,. After a long time of tracking him, when she found the offender in the middle of a crowd trying to lynch him, she reacted as she was taught in the ranks of the Cuban Police and took him out at the risk of her own life, protecting him until she could drive him.

“At that moment I felt it was my duty to prevent that man from being attacked. Cuba is a state governed by the rule of law and no one can take justice into his own hands; that is what the law is for,” she stressed.

Evelyn’s daily routine knows about beginnings, but never about the time of return, and even less about what each day will bring: “You know that you start work at 8:00 in the morning, the rest is dictated by the day. Sometimes you think: I’m going to have a little meal at home today… and in the end, you can’t because you have to do a search, an operation, or you get information that you have to deal with immediately. That’s why I’m so grateful for the support of my husband and my whole family, especially in caring for our daughter.

It is common to see her correcting, explaining, orienting, preventing the same thing in her office, in Block J of the José Martí district, or in the area for self-employed workers next to the shopping center in Block B. She considers it  her “red zone” because everyone has a license, but some persist in selling industrial products that constitute illegalities.

Whoever observes her realizes that she knows how to be firm and energetic, without losing her tenderness. Her walk is filled with the authority and respect that she has earned through her daily performance.

“The work of the sector chief is very rewarding. At the beginning, it can be cumbersome, but once you organize it and get to know the factors of the community, you realize that it is among the best specialties of MININT, because it allows you to communicate with people”.

Everyday heroines
The experience of First Lieutenant Evelyn Blanco Cadalzo is not unique in Santiago de Cuba, where 17 women, mostly young, work as sector chiefs in the PNR stations.

Being a woman and leading a sector does not imply any additional limitations, insists Evelyn Blanco. “It used to be seen as something rough, but not anymore. Today people in the community accept it, take it as something normal, which we can perform successfully. If women can build, how can we not be able to maintain order in the neighborhoods? Everything is in the heart and the dedication you put into it; that’s how you earn respect.

However, there are still hurdles to overcome in the experience of First Lieutenant Gretchen Pérez Delgado, sector chief at the 30 de Noviembre Popular Council. She goes out every day to combat illegalities in an area plagued by many important economic objectives and a very diverse population.

“Each day brings complexities. Sometimes people on the street think that because you are a woman you are not going to do your job and they try to look down on you. We have shown that we can do this work, and in fact, we do it with the same quality as men,” insists this energetic girl, the mother of a two-year-old girl.

For First Lieutenant Tamara García Cala, chief of sector No. 62, in the community of PetrocasasSalaíto, in the Abel Santamaría Urban Center, without the support of the family it would have been impossible to get the job done during her two and a half years of service.

So does Lieutenant Reyna Nápoles Fabré, who heads Sector 55, which covers the San Juan area. Her two children and her husband have been instrumental in her performance. With 29 years of service in the FAR and MININT, she walks without fear at any time in her territory: “Being a police officer is my pride, and I really like the work as head of the sector because every day you learn about the human being and  their social performance.

“I try to enforce what is established, but always reaching out to people. Every day I get up at 5:00 in the morning to be early in my area. The first thing I do is visit the community factors, get interested in the social reinsertion of some who are on probation, for example. Explaining, giving arguments, are keys to achieving the transformation of people, emphasizes Naples Fabré.

During the last three months, the rigors of the confrontation with COVID-19 in the slums added new tasks for these community heroines. For more than ten hours, the first NCO, Yenis Pereira Batista, sector chief in the Abel Santamaría neighborhood, risked contagion until she was able to transfer a suspected case of SARS-CoV-2 to the hospital.

“Usually,” she says, “I stay more at work than at home, and in this health situation, I have been almost always in the Sector, walking the area, visiting families and verifying that the measures are being complied with. When we see that we were able to contain the epidemic, without being confident, it is comforting to know that it was worth the effort.

This satisfaction is also felt in many communities in Santiago and in other provinces, where the population lives its daily life with confidence because they know that women and men of the stature of the interviewees defend the order and tranquility of the citizens in their neighborhoods and streets.