Is Cuba Today Violent and Insecure?

Who Wants the World to Believe that a Climate of Insecurity and Violence Exists in Cuba?

The blockade causes shortages, consumption is affected, constant feelings of anxiety are created, counter-revolutionary media try to connect people to hate. We have been educated according to principles of humanism and justice. Hate does not build. Let us not be manipulated 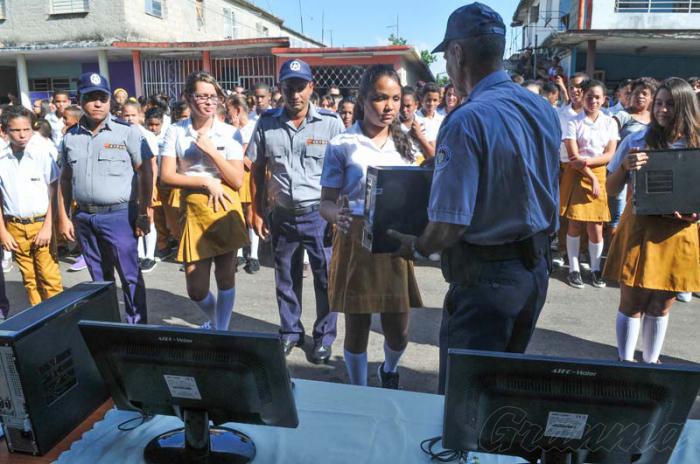 The National Revolutionary Police have been involved on many occasions in returning items stolen from schools to students. Photo: Juvenal Balán

On Tuesday [February] 11, at 12:26 p.m., a message surfaced on the internet, arousing the interest of thousands of people. One Internet user wrote on Facebook: “I just saw something shocking”, and was moved to tell of the courageous and dignified performance of a National Revolutionary Police (PNR) officer. “Alone, against an enraged mob determined to lynch a rapist, she, with no other shield than her body, fulfilled her duty (…) to protect his life, so that justice would apply the law to him”.

At the time, hundreds of people shared and commented favorably on the message, and the video uploaded to his channel by the Guerrero Cubano (Cuban Warrior) YouTuber, which motivated the Internet user’s writing.

In the material of Guerrero Cubano, one could appreciate the determined and just action of our police on February 8, in Santiago de Cuba. Proceeding according to the law, she was carrying out the arrest of a person who was accused of having committed a monstrous crime: the rape of a girl under eight years old. Meanwhile, a group attacked the law enforcement officers who, in spite of the complex situation, never lost their cool and acted with great professionalism.

In the course of these events, calls to lynch, burn, destroy, and confront the police began to appear in the networks. Unscrupulous people, taking advantage of the pain of the victim’s relatives, friends and neighbors, called for chaos and accused the PNR and the government of “protecting” the rapist.

The crime, unusual in our Island, awoke the indignation and anger of the people, in a country where respect for children is an essence and not a slogan.

The calls to violence and disorder using digital networks, messages that appear with a certain degree of synchronization, of articulation, in the main media of the counterrevolution, cannot be a coincidence. They appear in the same media that supported the wrongly called “Clandestinos” who tried to stain the immaculate image of the Apostle of Cuba, José Martí. These were the same “false democrats”, the same mercenaries, seeking, through the manipulation of the sensibility of a case like this, to involve people in acts against themselves.

The mechanisms of chaos and violence

The economic war against the island is increasing, using the method of blaming the victim. As the precept of unconventional warfare says, one must try to “achieve the strange result that the victim not only does not complain, but ends up blaming himself for his misfortune and applauding the executioner.

The blockade causes shortages, consumption is affected, constant feelings of anxiety are created, counter-revolutionary media try to connect people to hate, to lie to them, to mobilize them, and to skillfully pull the strings of rancor to turn people into a time bomb.

They “prepare the ground” with the aim of provoking great mental confusion, in the face of the avalanche of facts, messages, and false news. “Citizens fall into such a state of regression that they cannot think rationally, nor protect their interests,” the CIA manuals say. In that state, many people are easily manipulated.

Not for nothing did the subversion plans in the Obama era not renounce economic warfare. On the contrary, the Genesis project, to cite one example, clearly explained that it was necessary to “rigorously maintain pressure on the economy, to force the government to negotiate from disadvantaged positions”. It was a mixture of cultural seduction and economic suffocation.

During the presentation of the draft resolution Necessity of ending the economic, commercial and financial blockade imposed by the United States of America against Cuba, in New York on 7 November 2019, Cuban Foreign Minister Bruno Rodríguez Parrilla, stated: “In recent months, the government of President Donald Trump has begun an escalation of its aggression against Cuba, with the application of unconventional measures to prevent the supply of fuel to our country Its aim, in addition to affecting the economy, is to damage the standard of living of Cuban families. The United States government is indeed responsible.

About 187 actions, including fines, sanctions and measures against the Cuban people, were taken in 2019 with the aim of generating hardship, dissatisfaction and an uprising against the government. This was rightly stated in Lester Mallory’s Memorandum in 1960, which proposed to provoke disillusionment and discouragement in the population in order to facilitate the overthrow of the Revolution.

They want to leave us without fuel for transportation without gas to cook our food,  to paralyze the country, and to affect the daily life of the Cuban family in order to wrest political concessions from us. They need a lot of hatred, they need fear, they need to annul the judgment of the people, so that they act irrationally, to annul their psychological defenses, to destroy their self-esteem.

Cuba has been the object of a systematic campaign of motivational influence, pure and hard psychological warfare, fabricated in the laboratories of the CIA. Its goal has been to build a state of mind that will lead the people to act beyond all logic, one that will move them to execute aggressive actions, and to create a state of irrationality that can turn the human being into a beast. In that state, scientifically managed, they try to lead them to the achievement of the action desired by the manipulator.

As the ideologists of the Guarimbas, the Ukrainian Maidan, of George Soros and Gene Sharp, the “internationalist” Otpor boys, repeat over and over again: their  aim is to make sure that nothing remains but chaos.

The narrative of indignation in the service of imperial plans

In Bolivia, gangs of criminals, under the guise of “popular indignation” over alleged electoral fraud, took control of cities, carried out roadblocks in the style of Venezuelan guarimberos, burned institutions, made threats, committed murders, tortured people on the streets, and humiliated social and political leaders.

The modus operandi is not exclusive to our region. In November 2019, Iran suffered a wave of violence that destroyed 730 banks, 70 gas stations, 140 government buildings and more than 50 security force bases.

Behind this perfectly-crafted scenario was the targeting of protests, the escalation of violence, and the use of criminal recruitment to attack the security forces.

In 2004, Otpor leaders Srdja Popovic and Slobodan Dinovic created the Center for Applied Nonviolent Strategy and Action (Canvas) in Serbia, an attractive and productive business financed by the US government.

The manual Nonviolent Struggle: 50 Crucial Points, became the “Bible” of the seditious and terrorist movements in Arab countries and Latin America, as much or more than the manuals of Gene Sharp, Bob Helvey and Ackerman, pioneers in the name of this strategy, and its precepts have been applied against Venezuela, Iran, Ukraine, Syria, Bolivia, etc.

Genesis, a project of ideological political subversion developed for Cuba, perfectly described this type of scenario: “Once the intentions of the movement are publicly declared, the highly committed activists are recruited, they move on to carry out street actions that generate repressive action by the security forces, in such a way as to create a state of ungovernability and chaos that justifies, always at the request of the Cuban people, United States intervention”.

What is raised on hate does not hold

Who is interested in making the world believe that a climate of insecurity and violence exists in Cuba? The Miami hate machine, the mud producer, which is profoundly anti-Martian, which is the same as saying anti-Cuban; which ignores an essential principle of the Apostle, everything that tries to rise above hate does not stand. Martí was a revolutionary without hatred, which is why he disagreed with “the barbarians who entrust everything to force and violence”.

The PNR acted in accordance with the law, in a country of laws that respect above all things the integrity of the detainee, a detainee who is not guilty until he is tried and sentenced. The PNR acted in accordance with the tradition learned from the founders of the nation, in accordance with a Revolution that tried war criminals, murderers who committed atrocious crimes, tortured and disappeared thousands of young Cubans. Batista’s torturers were not lynched, they were put on trial with all the guarantees of due process. That is how we acted then and that is how we will always act.

The person guilty of such an atrocious act will be tried and convicted, we have no doubt. We have been educated according to principles of humanism and justice that are the essence of the “sun of the moral world” to which we aspire. Hate does not build. Let us not allow ourselves to be manipulated.

The networks have begun to manipulate an event that occurred in Santiago de Cuba, during the arrest of a subject with HIV who raped a girl under 8 years old. Hundreds of outraged people tried to attack him and the police fulfilled their duty to protect him. Some vandals took advantage of the situation to throw stones. #Cuba #Miami

TRANSLATION by Walter Lippmann for CubaNews.