In addition to the disqualifications proclaimed by the Supreme Electoral Tribunal of Bolivia, there is a campaign in crescendo against the candidatures of the Movement to Socialism 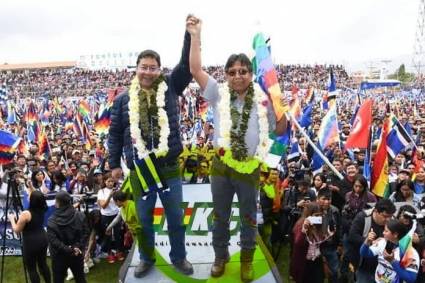 The disqualification, on Tuesday, of 365 candidates for the seats in Congress – which will also be held in Bolivia on May 3rd – shows just the tip of a campaign against MAS that has already been launched from the violent, from the “legal”, and now muddies, as expected, the electoral panorama.

The lack of transparency and credibility will affect many. It is true that most of the candidates eliminated from the race did not belong to the Movement Towards Socialism (MAS). Most (205) are from the right-wing Front for Victory, which in October nominated Chi Hyung Chu – a Bolivian of Korean origin who, although distant from Evo Morales and coup leader Carlos Mesa, came as a surprise when he came in third place… (Let’s not forget that usurper Jeanine Añez is now also running, and has aspirations).

But the MAS has 57 people who have been disqualified. And although the impossibility of going on the ballot also extended to members of the very group that represents Añez (the Juntos alliance, with only nine ruled out). So it is obvious that the fundamental blow is against Evo’s party, which was first in the polls since the beginning of the polls and when Luis Arce had not yet been chosen as its candidate for president.

This is the political grouping that has had the greatest impact in deep Bolivia after 14 years of refoundation, and in spite of the misunderstandings of certain neglected sectors that today are allied with the oligarchy, or are victims of its manipulations the crowds that came to receive Arce and his running mate, David Choquehuanca, when they returned to Bolivia a few days ago, showed that support.

The vulgar “cut” of MAS candidates for senator and congress is being justified by the supposed absence of certain documents and other bureaucratic requirements. It’s an argument as little credible as it is scarce the confidence in a Supreme Electoral Tribunal replaced without reason by the coup plotters, and headed by a headline that was slected “by hand”.

First, they persecuted and imprisoned the best leaders of the Movement Toward Socialism; then they confronted them with false accusations, and now they are preventing them from running.

It is hard to believe that officials as lowly as those who seized power would allow a return of the MAS to the House of the People or the Palace of Quemado. In order to wipe out their management, they are dismantling the fruits of the model.

The “hunt” goes on for more. Luis Arce has been linked to an alleged embezzlement in the Indigenous Fund. It could be used to get him out of the game at the right time. All that would be needed is to make the charges official (everything about it is false!) and call him to trial, or lock him up?

Meanwhile, the campaign against Evo is spreading. Not only has he been charged with terrorism and sedition, charges sent to Interpol to circulate an arrest warrant, which that agency rejected.

The alleged request by social and popular organizations to prevent Evo from running for the Senate has become a recurring theme in the official media. The argument is that he does not meet the requirements either because “he lacks papers”. This is the same sword wielded against Arce so that he does not seek the presidency either, and against Diego Pary, the former foreign minister, so that he is not allowed to run for the upper house.

This Wednesday, the former candidate and coup leader Carlos Mesa – Evo’s contender in October and the one who proclaimed the false fraud that opened the door to the coup -, asked the Prosecutor’s Office to extend the investigation against Evo, and to include the former vice president, Alvaro Garcia Linera, and the former ministers Juan Ramon Quintana (a refugee at the Mexican Embassy), Carlos Romero and Hector Arce.

His ploy is to link them to alleged “electoral frauds” in light of the frustrated October elections.

There is everything in the vineyards of this Bolivia of falsified institutions. There may be even more if, as some fear, the worst machinations are yet to come.

2 years ago Juventud RebeldeBolivia0
Is Cuba Today Violent and Insecure?In the Name of Love