White House decides to maintain restrictions on remittances to Cuba 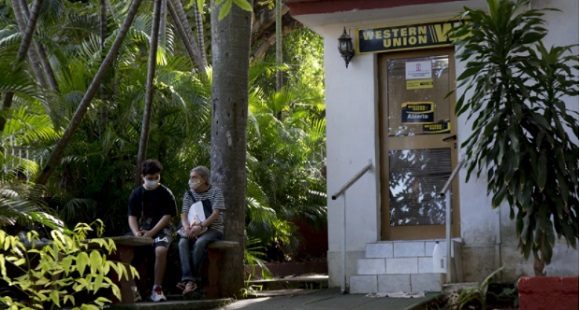 People wait to be served at a Western Union office on its last day of operations in Havana, Cuba, Monday, Nov. 23, 2020. Photo Credit: AP.

The U.S. government said Friday that the ban on sending remittances to Cuba will remain even longer, with which the White House hinders the right of families to help their loved ones living in the Caribbean nation.

A White House official told the media on Tuesday that the administration of President Joe Biden continues to study how to ensure that the money sent to the island does not favor the government of the largest of the Antilles, according to Reuters.

According to the source, the objective is to ensure that the benefits reach the Cuban people directly, although he did not mention how the U.S. economic blockade has been suffocating the inhabitants of the Caribbean country for six decades, even in the midst of the Covid-19 pandemic.

In July, Biden asked the Treasury and State Departments to suggest options for remittances to reach the beneficiaries, under the argument that the Caribbean nation’s executive appropriates between 20 and 40 percent of the remittances.

Last August, the manager of the Cuban commercial company Fincimex, Yamil Hernández, denied that the government of Havana or the armed forces obtained part of the amount sent from U.S. territory.

That theory repeated by politicians of the North American nation put an end to the relations of the Western Union company with the Cuban financial institutions in charge of processing remittances, specifically Fincimex, in October 2020.

The measure – imposed by former President Donald Trump (2017-2021) and maintained by the current administration – unilaterally ended the flow through regular and institutional channels, on the basis of totally unfounded pretexts, Hernandez asserted at the time.

The current U.S. president promised during his election campaign to change the hostile policy of his predecessor against Cuba, however, so far the 243 coercive measures imposed by Trump to reinforce the blockade remain unchanged.

(With information from PL)