The collapse of the USSR brought drastic change. Eighty-five percent of Cuba’s foreign trade had been with the Soviet bloc. The economy nearly collapsed. Friends tell me there were times when they literally went to bed hungry at night. Cubans call this the “special period in a time of peace” which isn’t quite over yet. Cuba’s principal trade partners now are Canada, Spain, Venezuela and Italy. Sugar has been replaced by tourism as the island’s main foreign exchange source. While the government retains control over the commanding heights of the economy, Cuba’s economic strategy today includes considerable openness to foreign investment. Most of this is in joint ventures with the Cuban state.

Cuba has opened up three duty-free zones which employ skilled and educated Cuban workers in commercial manufacturing, service provision and merchandising. Three hundred foreign companies are already active in these zones. Cuban workers are paid in hard currency. Tax exemptions and easy repatriation of profits make these particularly attractive to foreign corporations, and therefore these tax and duty free zones are marketed as such. Another duty free zone is set to open in Cienfuegos soon.

The fall of the Soviet bloc accelerated a reassessment of many previously held ideas. This had began somewhat earlier, during the rectification campaign following the 1986 congress of the Cuban Communist Party. There’s an extensive literature in which Cuba’s ties with the Soviet Union are reviewed and assessed critically. Here’s a sample:

In the book Development Within Underdevelopment: New Trends in Cuban Medicine, by Ernesto Mario Bravo (Editorial Jose Marti, 1998) we read about Dr. Pedro Lopez Saura, MD, a pioneer of Cuba’s biomedical industry, specifically recent work with Interferon. Here are some of his impressions of the German Democratic Republic, where he worked and studied:

The collapse of the socialist camp has affected him because of what it has meant for Cuba, but it didn’t come as a surprise. After living in the German Democratic Republic for six months, he came to the conclusion that that was a case of imposed socialism. He saw the people’s unhappiness and found that they were building socialism on the basis of capitalist values, attempting to turn socialism into an improved form of capitalism. He regrets what happened, because it was a step backward in history; but, in the long run, he thinks that what happened may turn out to be good because, the next time around, it will be the real thing.

He is convinced that capitalism doesn’t solve man’s problems. He knows this because Latin America and Africa live under capitalism. This is why he is so sure that people in Cuba will resist — he has no doubts about it. He is convinced that scenes such as those which appeared on TV during the Gulf War, with Iraqi soldiers kissing the hands of US soldiers, will never take place in Cuba.

Religious believers were welcomed to membership in the Cuban Communist Party in 1992, after considerable debate. (Before that, you had to be an atheist.) This broadened the party’s social and political base. Religion and its role in Cuban life are discussed on television. Religious institutions have their own publications, but not their own radio or TV stations as some would like.

Alternative and traditional medical modalities are available. They’re cheaper and less invasive than allopathic medicine. Acupuncture, laserpuncture, herbology, massage and even mudbaths are now part of Cuba’s national health care system. I saw local traditional medicine clinics, which have expanded recently. Like all Cuban medical care, they are completely free to Cubans. They are also offered at modest prices to foreigners. A Mexican airline flight attendant and friend of my hosts dropped in for a visit one evening. Together with her mother and brother, she had brought her ten-year-old son, who has Downs Syndrome, to Cuba for an experimental treatment. Many patients come from the US for treatments which are either unavailable or more expensive at home.

Foreigners travel to Cuba to take advantage of its advanced medical technologies. This is a notable source of hard currency. Cuba is AHEAD of the United States in some areas. The use of lasers with acupuncture, developed in China, has been available in Cuba for some time. Enabling legislation for this has yet to be adopted in the US.

DON'T TAKE IT FOR GRANTED
Smoking: In the US and other developed capitalist countries (except possibly Japan), smoking is on the decline and is socially discouraged. Cubans smoke everywhere, even on Cubana Airlines (in the rear of the plane). I was amazed at how many people smoke right in your face with no consideration for others. (Of course, I was sometimes like that when I was a smoker!)

Yoga, too, has now been accepted. Dr. Eduardo Pimentel, the leader of Cuba’s national yoga association, told me that the government is encouraging it broadly, but they lack experienced teachers and equipment. During my visit a group of US yoga teachers, including Rodney Yee, came to train Cubans. It was the second visit by US yoga teachers. Cuban yoga practitioners may be reached athttp://fiy.yoganet.org/fiyregistered.html or contact the Yoga Association of Cuba, a member of the International Yoga Federation, Licenciado Eduardo Pimentel Vázquez, Presidente, La Rosa # 610 apt. 2 / entre Boyeros y Ermita, Plaza, Ciudad La Habana, 10600, Cuba, Telephone: (53-7) 709237; e-mail: epvyoga@infomed.sld.cu

Since the traumatic fall of the Soviet Union, people talk about money matters all the time. An underground economy, fed by US dollars, caused havoc in the currency system. Individual possession of the US dollar was legalized in 1993. The dollar then was worth up to 150 Cuban pesos. Legalizing the dollar and other stabilization measures brought the peso up to 20 to the dollar today. Cuba is one of the few Third World countries whose currency has increased in value during the past decade.

Cuba is considering making its national currency fully convertible. They are extremely wary, however, of allowing too much dependence on the dollar. Some countries, like Ecuador, have replaced their national currencies with the US dollar. This makes them extremely vulnerable to sudden changes in the US economy. Cuba struggles to maintain as much economic independence as possible. 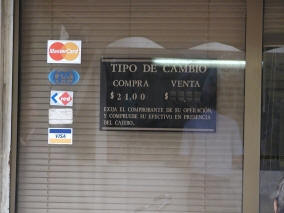 In the past, currency-conversion was illegal. Unlicensed money-changing is still against the law, but now anyone (Cubans and foreigners) can exchange money in widely available licensed public offices called Casas de Cambio (CADECAs). It’s quite a sight to see these small institutions with their MasterCard and Visa signs where people can exchange pesos for francs, or pounds sterling, or dollars, or get a cash advance with a credit card. (Only cards from US-based banks aren’t accepted.)

To limit competition between workers, they must share their tips with all workers in the establishments. In this way, cooks, cleaners and others without public contact share these hard currency benefits, along with waiters and bartenders. This rule, I was told, is strictly enforced by Cuban trade unions. Workers who are caught violating this rule can be fired. Since these jobs are highly coveted, these regulations are widely observed.

When journalists write that the Cuban peso is roughly exchanged at the rate of 20 to the US dollar, a misleading impression can be gained because many basic necessities are heavily subsidized, by governmental policy. Most people, like my hosts, own their own homes and pay little or no rent. This was one of the earliest gains of the revolution. I asked my hosts what their monthly utility bills were for November. They gave me their four bills for gas, electricity, telephone and water. Below you can get some idea of what they pay in Havana and what I pay in Los Angeles for the same basic necessities.