Home They don’t feel sorry, should they?

They don’t feel sorry, should they?

They don’t feel sorry, should they? 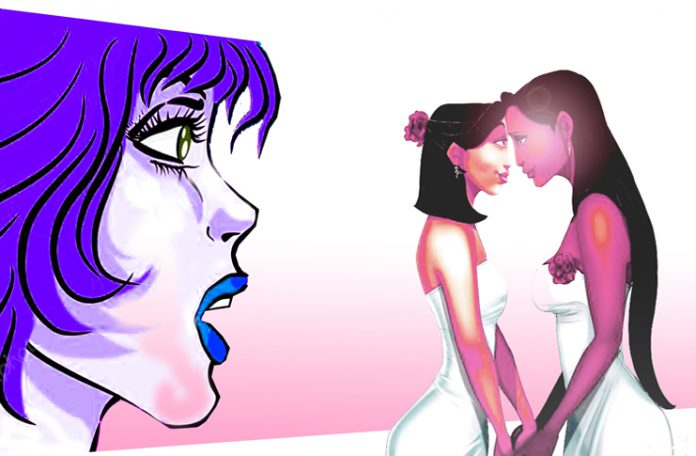 Two women walk together, holding hands, appropriating the same space and right that society allows heterosexual couples. Two women love each other and do not hesitate to share their affection, under the warm sun of these days. Two women kiss in public –an innocent touch of lips– and around them the looks of contempt, the feeling of disgust, the scandalized common shame.

-I don’t know, wow, I would be sorry, warns another woman.

Prejudices persist and reality is responsible for challenging them. Every day it is more frequent to see the amorous self-assurance of two women (or men) in the street. They try to lead their lives in this way, naturally, like the rest of the people, without feeling discrimination and offense towards one or another relationship. But the more habitual the scene is, the more settled the phobia of the different. There are still many people who conceive and accept, in public, only one type of affection.

To love and show it openly through any caress, goes through a strongly patriarchal culture, which still recognizes as legitimate and obligatory the value system linked to heterosexuality. Censure the candid kiss between two females with the same arrogance that should admonish the kissing, almost pornographic, of two young people of the same or opposite sex in a park or corner of the city. What’s reprehensible, given the case, does not lie in the sexual condition of those who kiss, but in the impudent manner in which something so intimate is exhibited. However, the morality shared today is sometimes more condescending in the face of obscenity and less in the face of what differs from their beliefs.

The prevailing macho and homophobic tradition repudiates the expressions of affection between two lesbians, for many, the most hidden and marginalized population within homosexuality. The reactions and terms used to define them (“disgusting”, “filthy”, “repulsive”) are truly offensive and show how little literacy continues Cuban society on issues related to sexual and civic education.

For the psychologist and activist Norma Guillard, a decades-long defender of the rights of lesbian women in Cuba, the situations of discrimination and rejection that involve them represent another example of gender-based violence in the country. This makes it difficult to face “lesbophobia” in the family and social spheres; more when there is not even a systematic observation about their conflicts, nor is sexuality promoted from an early age that allows people to face, with the necessary self-esteem, the condition in which they wish to live and be happy.

However, the matter goes beyond the institutional and legal efforts in favor of the rights of Lesbians, Gays, Bisexuals, Transsexuals and Intersex people (LGBTI), even in the nations where they have been recognized. Very recently, last October in Buenos Aires, Argentina –considered one of the most “gayfriendly” capitals in Latin America– Mariana Gómez, married to Rocío Girat, was arrested for kissing in public with her wife, in a clear attack on her sexual orientation The fact gave rise to protests against the obvious episode of lesbophobia.

If kissing is, as we know, a liberating and exciting act, its enjoyment in public, in a measured and tender way, should be assumed without sexist and discriminatory questions. Nobody is given the power to decide who should do it or not, but the possibility of being more tolerant, sensitive and respectful of the difference.

5 years ago TranslationsCuban Society, LGBT, Women16
Why is Insecurity Growing in the USA? Hollywood March Against Sexual Abuse