The gesture that makes Trump uncomfortable

The gesture that makes Trump uncomfortable

The protests against racism, supported in different latitudes of the planet after the assassination of George Floyd, have also gained strength in the field of sport 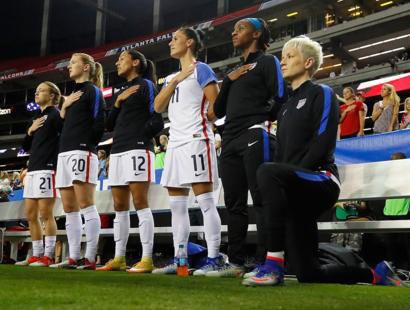 Donald Trump attacked the Black football players, members of the well-known NFL, because a group of them were kneeling on the ground to hear the national anthem, in protest against racial segregation.

U.S. law requires the military to perform its usual salute. All other citizens, including athletes, must remain standing, facing the national flag, with their right hand resting on their heart, while the anthem is played.

By not following this guideline in different facilities, Trump, although there was no clause in the NFL regulations, pressured the organization’s directors to punish all players who expressed themselves in this way against racism and inequality.

In light of the current events in the convulsed American scene, when this Tuesday would be the burial of George Floyd in the middle of the incombustible protests, the United States Soccer Federation (US Soccer) will open a debate to on ending the controversial rule of prohibiting its athletes from taking a knee during the playing of the national anthem, the spokesman of the entity confirmed.

If the rule were to be repealed, it would immediately cease to have any effect. The measure came to life when Megan Rapinoe, four-time U.S. women’s national team champion and Golden Ball winner, knelt on the field in solidarity with American footballer Colin Kaepernick, who in the same gesture in 2016 sparked the anger of Trump, who pushed him out of the NFL

Rapinoe’s solidarity with the expelled player was the reason used by the president to radicalize the ban on kneeling on the ground.

The protests against racism, supported in different latitudes of the planet after the murder of George Floyd, have also gained strength in the field of sport, an important aspect of American national life. This is not only because of the rivalry that exists between the teams of disciplines that are widely followed by the population, but also because athletes are symbols that awaken empathy.

The quality of Black athletes in the United States is internationally recognized; many have been the protagonists of feats remembered throughout the world. Today, even though major competitions have been halted by the pandemic in that country, it is to be hoped that, when they return to action, there will also be a revival of protests in the stadiums, and knees on the grass.

2 years ago GranmaDonald Trump, racism, US politics0
United States at the CrossroadsDeath of Two Black Men Hanging from Trees.