Death of Two Black Men Hanging from Trees Sparks Outrage and Raises Questions in the U.S. 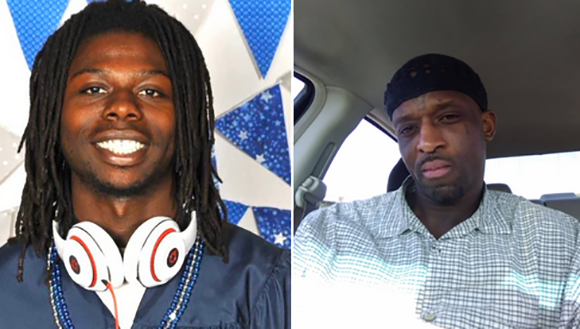 In the midst of a wave of protests against racism in the United States, two deaths initially labeled as suicides have caused shock and raised questions.

In the last few weeks, the bodies of two black men, Robert Fuller and Malcolm Harsch, were found hanging from trees in two Southern California cities.

In the first announcements, the authorities pointed to suicide as a possible cause of death in both cases, but have now opened investigations.

This was after the families demanded investigations after expressing their unconvinced opinion that they had been suicides.

About 50 miles and 10 days separate the deaths of Fuller and Harsch.

The names of Fuller and Harsch resonated widely on social networks over the weekend, and activists in the Black Lives Matter movement joined the demands of their families.

The characteristics of the incidents have also brought to mind the terrible past of lynching of blacks in the United States in the late 19th and 20th centuries. 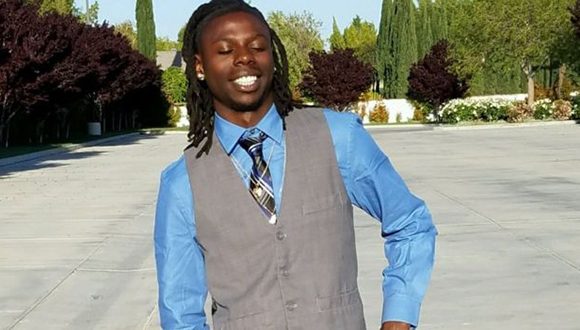 “No one was at the scene and paramedics found the body hanging from a tree,” Los Angeles County Fire Department Chief Daryl Osby said Monday.

A passerby who saw the body contacted the authorities.

An autopsy was carried out last Friday 12th, the results of which have yet to be announced.

“Initial reports seemed to be consistent with suicide, but we thought it prudent to step back and continue to investigate,” said Jonathan Lucas, head of the county coroner’s office.

Lucas explained that there was initial talk of suicide, due to the “absence of evidence” indicating a possible homicide.

According to authorities, there were no chairs or other artifacts in the vicinity of the site and only “what was in his pocket and backpack” was found, Kent Wegener, in charge of the sheriff’s office homicide unit, said Monday.

Wegener detailed that a forensic analysis of the rope will be done, as well as a study of the type of knot to determine how it was made. They will also investigate whether “there is video footage from surveillance cameras or from homes” that has captured what happened, and they will check the young person’s cell phone.

Authorities said they will also investigate the medical history of Fuller, who was assigned to a state social worker, although the reason is unknown.

According to what county sheriff Alex Villanueva said Monday, the attorney general’s office “is going to monitor and review our investigation.

The official also noted that the FBI (Federal Bureau of Investigation) will be involved in the investigation from the civil rights division.

What was the reaction and what did your family say?

Last Friday, after news of his death was made public, Palmdale residents questioned authorities for first reporting it as a suicide. 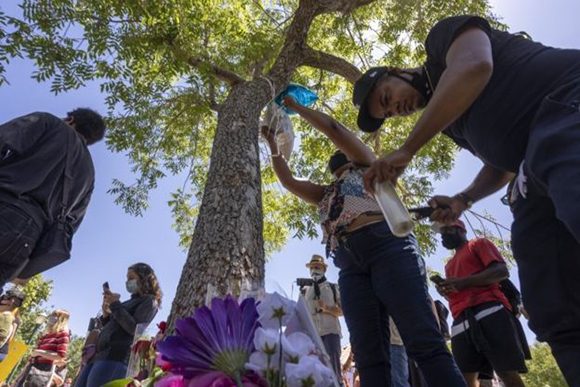 Palmdale residents set up an altar in honor of Fuller on the tree where he was hung on June 10. Photo: Getty Images.

“Where are the surveillance videos?”, “We don’t trust you”, “Why did you conclude it’s a suicide?”, some questioned the city sheriff in the middle of a tense press conference.

On Saturday, Fuller’s sister spoke from the square where the incident occurred and where hundreds of protesters gathered. 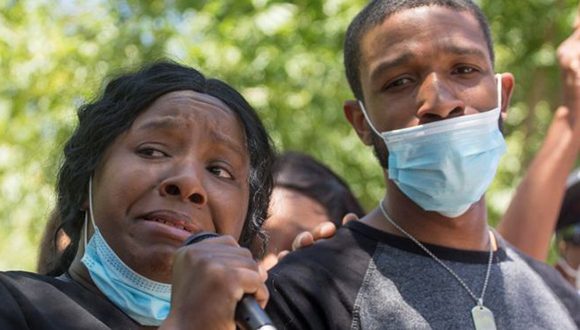 “It doesn’t make sense, my brother wasn’t suicidal,” he said.

Antelope Valley, the area where Palmdale is located, “is known in Southern California as a bastion of white supremacy and that goes back decades,” Los Angeles KCRW radio reporter Cerise Castle said in a report Monday for National Public Radio (NPR).

“In 2016, there was an incident in which three men were charged with a hate crime after attacking a group of Latinos in a park. This was one day after the Ku Klux Klan [white supremacist extreme group] held an event in the area,” he said. 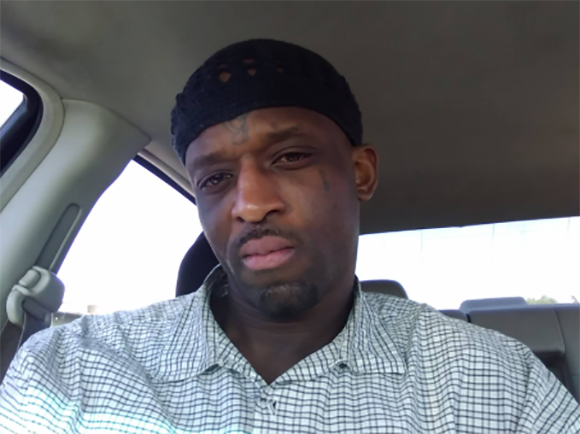 According to the San Bernardino County Sheriff’s Office report, shortly after 7:00 a.m., a call came in to the 911 emergency number from a woman who reported that her boyfriend had hung himself.

The paramedics arrived at the site, which the authorities describe as a “land” where there is a camp of homeless people.

The woman indicated that “she and her boyfriend, later identified as Malcolm Harsch, had been together during the morning, but she had returned to her tent for a short period of time.

“Others in the camp warned him that Harsch had been found hanging from a tree,” that he had been taken down from there and was being given CPR “to resuscitate him,” the statement said.

The emergency personnel who arrived later continued unsuccessfully with the attempts until he was declared dead.

The cause of death is yet to be known.

The authorities present at the scene, including forensic personnel, stated in the letter, “did not collect any evidence suggesting a possible murder”.

What did the family say?

Harsch’s relatives, who live in the state of Ohio, said in a statement last Saturday that they found it hard to believe the man had killed himself, that he “did not seem depressed” and that he had “recently talked with his children about seeing each other soon.

In the letter, the relatives reported that the autopsy had been carried out “12 days after” his death.

“There are many ways to die, but considering the current racial tensions, for a man to have hung himself from a tree definitely does not make sense at this time. We want justice, not easy excuses,” they said.

The city authorities reported that they would make the results of the investigation public once it is completed.

County Sheriff John McMahon said his office was in contact with the state Department of Justice, which was following up on the inquiry.