Home United States at the Crossroads

United States at the Crossroads

United States at the Crossroads

As the crisis in the U.S. deepens and the protests following George Floyd’s assassination take on a broader tone, old and new wounds of a society in need of profound change come to light
—————————————————————————–
Author: Raúl Antonio Capote | internacionales@granma.cu 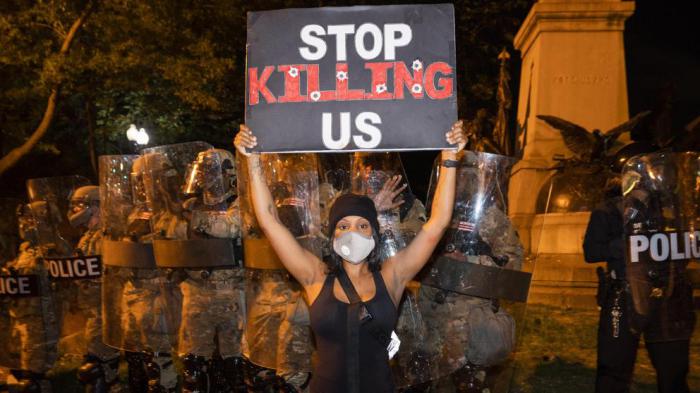 The protests take on a broader tone, bringing out old and new wounds of a society in need of profound change. Photo: La Vanguardia

As the crisis in the U.S. deepens and the protests that have erupted in the wake of George Floyd’s assassination take on a broader tone, old and new wounds of a society in need of profound change come to light.

The makeup that was intended to cover the worn-out face of the US Statue of “Liberty” is slowly fading, and the truth is making its way into the minds and hearts of the people. A protester in New York asks in front of the cameras of a TV network covering the protests: Where is the greatest country in the world, and he answers himself with anger and pain: “It is not here.”

It’s a fact that U.S. Secretary of State Mike Pompeo boasts of being an accomplished liar and recalls during an interview at the University of Texas A&M, the time when he was director of the company, his image as a supposed strongman is not respected either.

The head of U.S. diplomacy is still the same cynic who said, “I was the director of the company. We lied, cheated and stole. We even had training courses” which drew applause from those present, who must have included some of those who, these days, obeying Trump’s “guidance”, gargle with chlorine to combat COVID-19.

You can’t fool everyone all the time. The current government is responsible for more than 112,000 deaths from the pandemic, rampant unemployment, loss of rights, hunger for many (a hunger they can no longer hide), lack of medical care for the majority of the people and racial discrimination.

The man already considered by many the worst president in the history of the United States is covered by a deluge of criticism, with a shower of lies launched through Twitter, a kind of “counter-water” strategy that seems to make no sense, but it does.

Donald Trump speaks to his base, those who voted for him in the previous election, and hopes they will do so in the next one, on November 3. They are secure bases that have remained faithful to their president, despite the defection of a group of the less firm.

Who will vote for whom?

Those who will vote for Trump are those who see him as a “winner” who will achieve success for America, those who admire his showmanship, his misogynistic poses, his image as a rich, powerful man, with a lot of luck with women.

Those who are alienated by conspiracy theories, including those who believe that health care reform and 5G [Internet] seek to control the population.

The U.S. government, which is opposed to vaccination, believes that the left belongs to an alien invading race that wants to dominate the world, and a thousand and one other absurd theories.

Trump gloats over the unconditional love that many ultra-nationalists, religious fanatics, racists, supremacists, and separatists have for him, to whom he presents himself as a political outsider.

Trump and his team calculate that many of the people who oppose his re-election will not vote for Joe Biden either.

They estimate that the most radicals, who want a profound change in the country, would not vote for the neo-liberal group that the former vice president represents. Many millennials and Z-generation supporters do not see Biden as a viable option for solving the country’s problems.

Therefore, faced with possible massive abstentionism, motivated by the lack of valid alternatives and the security of the vote of their bases, the followers of the current president trust that they can win again.

However, the situation is getting darker for him. Important figures of the Republican Party, prestigious military and hawks with voice and influence, are closing ranks against Trump’s possible re-election.

Colin Powell, former chairman of the U.S. Joint Chiefs of Staff, was the last of a series of retired senior officers to publicly criticize Donald Trump.

Powell, who served as secretary of state during the George W. Bush administration, and according to the Pew Research Center, a Washington, D.C.-based think tank, his statements can influence independent voters, who make up 38 percent of the electorate.

Among others, Trump has been criticized by former Presidents George W. Bush and Barack Obama and former presidential candidate Mitt Romney.

Powell has been joined by the voices of several prominent military figures, including former Secretary of Defense James Mattis, who said that Trump is not “a mature leader” and accused him of “deliberately trying to divide the country.

Former U.S. Chief of Staff John Kelly, a retired general who served in the U.S. government, called on the American people to “look carefully at who you elected.”

Another uniformed man who spoke out against the White House tenant was retired Navy Admiral William McRaven, the commander who led the military operation in which the U.S. killed al-Qaida leader Osama bin Laden.

“It’s time for new leadership in this country, Republican, Democrat or independent,” adding that “the president has shown that he doesn’t have the qualities to be a good commander-in-chief.’

Current Defense Secretary Mark Esper criticized Trump’s actions during the protests: “I do not support the invocation of the Insurrection Act. These measures should only be used as a last resort, and in the most urgent and extreme situations.

Prominent intellectuals, renowned artists and sportsmen, workers, unemployed, Afro-descendants and Latin Americans, businessmen and ex-soldiers, small landowners ruined by the crisis, young people from all walks of life, have joined in the protests across the U.S.

Many are talking about giving their all so that the current administration will not be re-elected. It looks bad for the tycoon-president. Whatever he does, history is bent on sawing the floor to him.