Home The Antigen of Cuban Vaccines

The Antigen of Cuban Vaccines

This is the third in a series of articles. 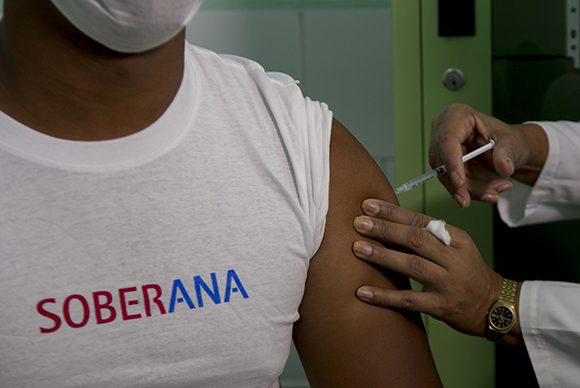 We Cubans have a very remarkable platform for biomedical production, one might even say extraordinary for a country like ours. An infamous 2004 document from the “Commission for the Support of a Free Cuba” of a previous administration in the US described it as unnecessary and very expensive for such a poor country as ours:  “Large sums were also directed to activities such as the development of biotechnology and bioscience centers not appropriate in magnitude and expense for such a fundamentally poor nation, and which have failed to be justified financially”.  The only thing to be added to this is that those of us in the South with darker skin ought not to have the luxury of science.  But our biopharmaceutical sector is the child of necessity, of the creative initiative of a lover of knowledge and a true revolutionary, as was our Fidel, and of an educational policy that gives everybody without distinction the right to reach the highest level of human knowledge and to with that knowledge, create.  It was not begun with a specific strategy or goal but became, as it is today a bastion of the knowledge, science and culture of our country.  It was and is the fruit of revolutionary thinking.

The development of a vaccine today requires the existence of today’s conditions for this kind of research.  It must begin by looking at the scientific literature for antecedents and ways of doing things that can lead to the implementation of more and more exquisite laboratory procedures and rigorous tests. In our case and for the above reasons, a firm base for the research was already established when the COVID 19 emergency arose. Events such as these cannot be foreseen, but the preparation of the conditions to face them is the duty of any decent political system.

Chinese science immediately made available to the international community everything it knew about this dangerous and ultra-contagious virus and in other countries as well the information that was being generated was made available to all. Under these conditions, several of our scientific groups set to work to obtain a specific Cuban vaccine for this disease. One of the efforts, at the Finlay Vaccine Institute, is led by the same Prof. Vicente Vérez who obtained the previous milestone of the vaccine against “Haemophilus influenzae”, the first with synthetic antigens that was used and commercialized in the world. The other groups involved work at the Center for Genetic Engineering and Biotechnology with a long tradition also in the design and production of novel vaccines.

Remember that the essential component of a vaccine is the antigen that activates the immune system and leaves it ready to fight and destroy the foreign invader. Additional determining factors are both the adjuvants and the pharmaceutical forms for delivering the vaccine to humans. If you have an established and strong foundation in these last two aspects, determining the most suitable antigen becomes the heart of the creative work.

The antigen chosen in Cuba, for many reasons, was the “receptor-binding domain” of the virus (RBD). In simple terms, these are the molecules that constitute the external “spikes” so striking that they appear in the pictorial representation and the high-resolution microscopy of the viral molecular aggregate. This CoV “spike” protein (S) plays the most important role in viral binding, fusion and entry into cells of the organism attacked by the virus.

Therefore, it serves as a target for the immune system to develop antibodies, and for scientists to use them as antigens in the design of effective vaccines. An article that appeared in one of the branches of the well-known journal Nature had characterized this component as very promising as a vaccine antigen against COVID 19 as early as March 2020. The authors of the article are a very good reflection of the current internationalization of the basic sciences.  Most are Chinese in origin and did extensive work in collaboration between the Lindsley F. Kimball Research Institute in New York, the Beijing Institute of Microbiology and Epidemiology, and the Key Laboratory for Medical Molecular Virology at Fudan University in Shanghai.

Our compañeros evaluated alternatives. One of them was to generate the so-called messenger RNA that was capable of producing the antigen in human cells. It is an ultra-modern technology that is being used in some of the COVID 19 vaccines that are already being applied. It has some advantages, but also has an important disadvantage so far not overcome for a vaccine that is intended to be administered massively throughout the world, especially the less developed one: it requires very strict cooling conditions for its transport and preservation.

Our biotechnology system, on the other hand, has at the Center for Molecular Immunology (CIM) the possibility to “ferment” mammalian cells that directly produce the RBD antigen, since the technology has been developed for other similar productions. It also has the possibility of producing a significant quantity if the antigen is viable for our vaccine. Therefore, all Cuban vaccine candidates, at least up to now, are based on this antigen, with some modification that makes it more active.

The results are exhilarating. And thus our scientists began the race to produce a variety of vaccines, in different institutions and by different scientific groups, collaborating and competing, in order to arrive at the best solutions. “SOBERANAS” 1 and 2, the MAMBISA and the ABDALA are very promising.

Vaccines are drugs. Therefore, they require measurements of their effectiveness, knowing their contraindications and risks, and finding the appropriate formulations and the most viable forms of administration before applying them en masse. Everything must proceed in a strict regulatory framework to ensure that consequences more serious than the disease itself were avoided. If they have the same antigen, how are our vaccine variants different? What state are they in their research and development?

Luis Alberto Cabrera Montero holds a Doctorate Chemical Sciences.   He is Senior Researcher and Full Professor at the University of Havana. He is President of the Scientific Advisory Council of the University of Havana and is a Merit Member and Coordinator of Natural and Exact Sciences of the Academy of Sciences of Cuba.  For a full biography, see http://www.academiaciencias.cu/en/node/674

1 year ago CubaDebateCovid-19, vaccines0
What are vaccines?Family violence: new views