Continuing on the road of joy, trust and hope 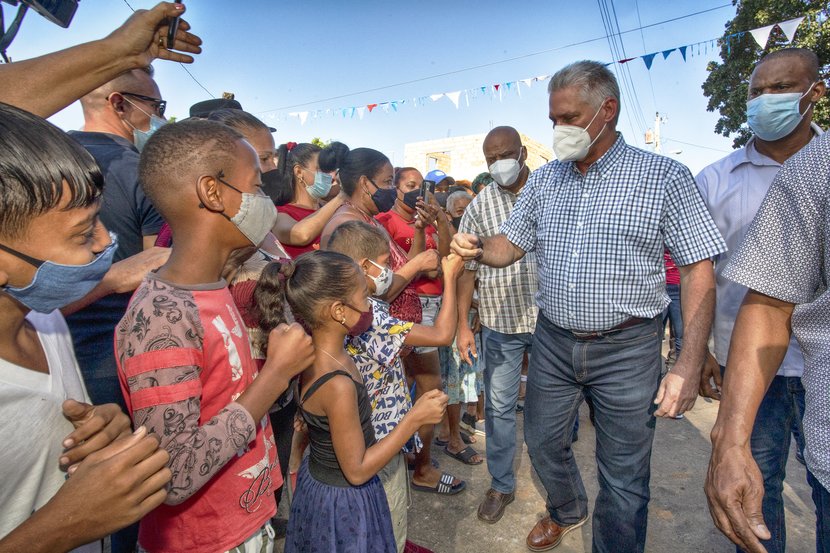 Together, we must continue on the road of joy, trust and hope.

By Díaz-Canel in Havana
October 16, 2021
Translated and edited by Walter Lippmann for CubaNews

Havana, Oct. 16 – “Do not stand still. Everyone should always be doing something”. In these words dwells the philosophy of breaking with all immobility, of giving life a sense of creation and usefulness. The expression was made this Friday by the First Secretary of the Central Committee of the Communist Party and President of the Republic, Miguel Díaz-Canel Bermúdez, while visiting the La Corbata neighborhood of the Cubanacán People’s Council, in the capital’s Playa municipality.

There, as Usmany Lemagne Pagés -delegate, for the last four years, of the 80th popular district, called La Corbata- told us, the people’s mood is good since many actions have been undertaken, some of which have been noticeable for three years.

The delegate was born in that neighborhood: “In my youth, practically everything was made of wood”, he affirmed; and then he shared his joy because the neighborhood’s demands are getting solutions; because everything is paved; because new sidewalks have been built; because one fine day the medical office was ready to be able to vaccinate against the COVID-19; because the houses that the residents have been improving with their own effort and with the passing of the years are being legalized there.

Other good news will continue to make people talk about the neighborhood: there will be talk of its own winery -which the neighborhood never had-; cultural venues will be born; creations will continue to arrive to decorate the spaces -which will be added to those that Kcho (the plastic artist, Alexis Leiva Machado) has been donating-; the cobblestone parks will have an encouraging presence; small vortexes from which it is produced -those that will be not far from the carpentry shop located in the neighborhood- will give employment to those who are disconnected from any work; and finally, life will flow according to the concerns and feelings of the residents.

What they are doing is first consulted with the people and then seen in the Municipal Assembly of People’s Power? Where do the children go to school? How are the vaccinations going? During his tour, the President asked the first secretary of the Municipal Committee of the Party in Playa, Cesar Hernandez Gonzalez. At some point, the dignitary shared an idea that is useful for other similar endeavors: “we have to do things well, with beauty, with quality; because, if not, instead of creating new satisfactions, we will be creating new problems”.

As he walked along an asphalt road leading to a construction site in Kcho, together with Party and Government authorities, and with representatives of several institutions -such as the Ministry of Tourism, which accompanies La Corbata in its changes and whose head, Juan Carlos García Granda, was present- Díaz-Canel Bermúdez was greeting the people: He touched with his fists the fists of the joyful men and women, he greeted the laughing and curious girls and boys -the same ones who improvised a dance for him, guided by choreographer Roclán González-. And he reached the end of the road, holding a little boy by the hand, who advanced naturally and perhaps someday he will tell of this Friday of rebirth.

From the neighborhood in the municipality of Playa, the Cuban President went to the municipality of Old Havana, exactly to the Taxpayer Facilitation Office, which has been working in recent years to expedite the payment of the property tax, which the office collects by state mandate.

In this precinct that is part of the Historic Center “Smart City”, which is a local development project and that through a group of digital tools makes it possible for the population to carry out procedures or transfer disagreements, in person or virtually, the Head of State expressed to journalists a set of ideas based on a question alluding to what is being done in the neediest neighborhoods.

Every time we want to understand something, he said, about the work strategy in the neighborhoods, we have to look for references, antecedents, dissatisfactions, “we also have to find the motivations, the aspirations for which these things are being done”.

The president recalled that then came “very difficult times, from which we have not yet recovered”; he brought up the special period. Those were times, he reasoned, that “caused limitations, caused breaks in progress, slowed down processes, and all that accumulation of problems, and the impossibility of having a faster solution, has reflected all these dissatisfactions that exist in an important part of the population, those reflected in Silvio’s documentary (entitled Canción de barrio), those that we have been appreciating in all these years”.

The First Secretary of the Central Committee of the Communist Party made reference to “the need to strengthen in a more creative way our concept of popular power, which as a democratic and participatory exercise gives us the strength to make a much more participatory management. But we have to know how to do it, we have to drink in the history of how popular power arose, and we have to try to universalize it in the whole social context”.

He did not ignore in his words that in the recent exchanges that the country’s leadership has held with various sectors of society, not only dissatisfactions related to what happens in the neighborhoods have surfaced, but also with the ways of doing, those that are missing to change, to enhance the best. “Sensitivity -he stressed- moved us all to the fact that we had to go to a different moment, to a moment in which (…) we had to break with a routine (…)”, and this, he said, has been a catalyst that should lead to the sustainability of the work in the neighborhoods.

It is a story, he reasoned, where people’s proposals are cardinal, because this way priorities are drawn at a time when resources are not enough to solve everything at once: Each idea – Diaz-Canel explained – is taken with the participation of the neighbors, through the delegate, to the Municipal Assembly of People’s Power, a space where then a balance of all the communities of the demarcation is made. Thus, he said, the actions are approved, and “through the Municipal Administration Council and the institutions, we work together”.

“How many things have we seen these weeks in the neighborhoods: places with sidewalks, which never had sidewalks; asphalted streets; problems with the water supply, solved; and of ditches and other elements that had to do with liquid waste; (…) beauty; new services appear in neighborhoods that never had services”.

This means, he reasoned, “a tremendous joy in the people, confidence and hope”. And all this, in a context of having lived “two intense years”, between aggressions, recrudescent blockade, and pandemic. In his opinion, it is very important that “this light arrives”, and that “the commitment that we cannot stop because we have to make this become a systematic, natural, genuine way of working, where everyone participates, where everyone can contribute”.

On the strength of participating, Diaz-Canel Bermudez said: “We have to see how people begin to defend their neighborhoods, how they begin to change their lives. I believe that what we have done is insufficient and is very far from everything we have to solve, but a path has already begun (…) and it is a path in which people are supporting us”.

There is a way, he reflected, to “consolidate our democracy, consolidate it from participation; participation in everything”: in the debate, he pointed out, in the possibility of making proposals, and in the implementation of those proposals; participation that guarantees popular control. “I believe that working in this way, in a few years we will also be making appreciable changes in the lives of our communities that need it so much, and with which we have a debt, not because we have not wanted to work, but because many adverse situations have come together.”

In the face of adversity, the President shared his certainty of how “creative thinking has arisen -I always say that resistance is not resisting, resisting by holding on: it is resisting creatively, and we have found solutions, we have found a way of doing (…) that is also opening up a perspective for us”.

The Head of State expressed his confidence in “everything that we can generate with this movement in the neighborhoods, and I hope that it will never fall into a routine, that it will be something natural, that it will be a necessity for our communities to work in this way”.

Regarding the path that has been started, he said: “This will also require that those who represent the people in these communities -their delegates, the public institutions- also, in interrelation with all the economic and social actors we have in the neighborhoods, are participating and giving a perspective of development, of progress to their communities; and this way we will all be happier, this way we will be working for all, with all, and for the good of all. In this way we will be very consistent with our Constitution, and we will also be very coherent with our economic and social strategy, with our Conceptualization. I believe that this is an integration of ideas and actions for the good of all”. (Presidency Cuba)