No Disappeared or Tortured in Cuba 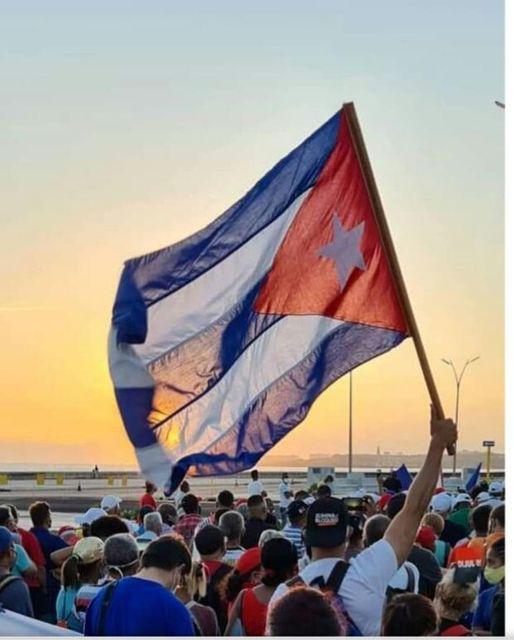 There are no disappeared or tortured people in Cuba (+ Video)

Following the riots that took place on July 11 and 12, as part of the political-communication operation encouraged and paid for by the U.S. government against Cuba, alleged lists of missing persons have begun to circulate on the Internet.

After the riots that took place last July 11 and 12, as part of the political-communicational operation encouraged and paid for by the US government against Cuba, supposed lists of missing persons have begun to circulate on the Internet.

But, are there really missing persons in the country? Are such lists real? What is the procedure for the detention of a person? What limits are there to the actions of the authorities?

In answering these questions, during an appearance this Tuesday on the program Hacemos Cuba, Colonel Victor Alvarez Valle, second chief of the Specialized Body of the General Directorate of Criminal Investigation of the Ministry of the Interior (MININT), categorically assured that in Cuba there are no missing persons, neither of the processes referred to the recent disorders, nor of any other that has been carried out.

“We have as a principle, in the Revolution, and it is also what characterizes the actions of the authorities, the right to life, to freedom, the right to the preservation and security of people,” said the colonel, while informing that Cuba is a signatory of the International Convention for the Protection of All Persons from Enforced Disappearance.

This position, he said, was also recognized in the Constitution approved by the majority of Cubans and, although in our legal system it is not characterized as a crime, there is a group of figures that cover and punish those who commit these actions, in the event that the occurrence of an enforced disappearance is proven.

Furthermore, he added, “there is no secret establishment for the processing of persons who, for any reason, or for the commission of crimes, are taken to one of the dependencies of MININT”.

Regarding the process of detention of a citizen, José Luis Reyes Blanco, head of the Department of Supervision of the Directorate of Criminal Proceedings, of the Attorney General’s Office (FGR), explained that “the records of this process, the detention record that is signed by the person involved, the information on the detainee and the presence of the Prosecutor’s Office throughout the criminal process from the beginning, contribute to control the investigation and allow us to ensure that in our country after 1959 there have never been missing persons”. Evidently, if there were events of this nature in the country, the number of denunciations in the Prosecutor’s Office, through all its channels of attention to the citizens, would be considerable.

However, commented Reyes Blanco, in the year 2020, in the middle of the pandemic, the Prosecutor’s Office attended more than 129,000 people throughout the country; during the first semester of this year, the attention exceeded 49,000 and, as of July 12, for events associated to the riots, 63 people have addressed to this organ, mostly through face-to-face channels.

“But none of these complaints or claims have been related to disappearances”, he stressed, but to arrests, that is to say, in search of certain information, which they have received in the places to which the interested parties have gone.

Today, he commented, the Prosecutor’s Office is investigating five claims related to general non-conformities in the process, but no case is pending to define the place where the person is located. There is information and, more importantly, the family knows it”.

In this sense, Colonel Alvarez Valle pointed out that when a person is taken to a police unit, the first thing that is done is to register him/her in a logbook, manually, and the arrest record is drawn up. Therefore, the person knows why they are being taken to the station.

Then, he continued, there follows a process that can take place in the first 24 hours, which contemplates his first statement, and the measures that, depending on the crime, can be imposed.

“In the first 24 hours, the family generally knows where the person is because, in addition, MININT has a system of attention and information to the population, automated and interlinked among all units, where each of the detained persons is recorded.

“In recent cases, all the families know where their detainees are, they have gone to the places, they have delivered belongings with personal hygiene materials or specific medicines; in other words, the information on the whereabouts of the people is established and auditable by the control bodies of the Prosecutor’s Office”, he explained.

Subsequently, he also referred to the International Convention for the Protection of All Persons from Enforced Disappearance, to which Cuba is a party and was reviewed in 2017.

As applied in the country, Article 17, specifically, establishes, among other elements, that:

No one shall be secretly detained.

Without prejudice to other international obligations of the State party regarding deprivation of liberty, each State party, in its legislation:

Shall establish the conditions under which orders of deprivation of liberty may be issued.

Determine the authorities empowered to order deprivation of liberty.

Guarantee that any person deprived of liberty shall be held only in officially recognized and controlled places of deprivation of liberty.

Guarantee that any person deprived of liberty shall be authorized to communicate with and be visited by his family, a lawyer or any other person of his choice, subject only to the conditions established by law, and in the case of a foreigner, to communicate with his consular authorities, in accordance with applicable international law.

It shall guarantee the access of any competent authority and institution empowered by law to places of deprivation of liberty, if necessary with the prior authorization of judicial authority.

For his part, the prosecutor clarified that all persons detained after the events of July 11 are able to appoint a lawyer, that some do not have one is up to the choice of each individual.

And to totally deny the mentioned lists, at another moment of the program, communication was established with one of the alleged missing persons, who also spoke of other colleagues who swell the records circulated on the Internet and who are in perfect condition.

The Second Chief of the Specialized Body of the General Directorate of Criminal Investigation of MININT reiterated that these lists lose credibility due to the lack of data, and because it has been proven that many of those registered therein have never been arrested or even interviewed by the authorities.

Reyes Blanco commented that, among the detainees, a group has already been released because it has been confirmed that they have had no criminal participation, others are under a non-detaining precautionary measure, and there are defendants in the preparatory phase, with a precautionary measure of provisional imprisonment.

TORTURE WILL NEVER BE A PRACTICE OF THE CUBAN AUTHORITIES.

Another matrix that has been tried to be positioned in the social networks puts the dart in the occurrence of torture with those involved in the destabilizing actions.

Colonel Alvarez Valle said, “just like forced disappearances, torture is not a practice in Cuba. The history of the Revolution proves it, and it is not and will not be the practice of the combatants of the Ministry of the Interior to use force against those being prosecuted”. He also said that Cuba is a party to the Convention against Torture and Other Cruel, Inhuman and Degrading Treatment or Punishment.

José Luis Reyes detailed that, after the riots, the presence of prosecutors in the units has increased, because it is in the interest of hearing the opinion of the detainees, and this is a favorable scenario for dialogue and to convey any concerns or complaints.

The broadcast of Hacemos Cuba also called attention to a complaint of a young man who has escalated in recent hours in social networks, referring to acts of violence committed against him, after being detained after the riots.

This person, the colonel pointed out, is subject to a precautionary measure of house arrest for a previous process, which implies requirements that he has to comply with; however, he was in the street, outside the vicinity of his home, in the middle of the disturbances of the order, which breaks the provisions, of which he was informed.

Prosecutor Reyes Blanco added that, among the complaints in progress at the Prosecutor’s Office, there is that of this young man, since his father presented himself at the said body. All the data were taken and the pertinent inquiries and investigations will be carried out, with total transparency.

Should any irregularity arise, said the colonel, the circumstances in which the facts occurred would be clarified and the corresponding measures would be taken, either in the disciplinary order, if he were a combatant, or in the criminal order if the conduct were to be in violation of the law.

Therefore, arguments were sufficiently clear that in Cuba there are no disappeared or tortured persons, and, if any irregularity occurred or had occurred in the actions of the Ministry of the Interior or the Prosecutor’s Office, it will be investigated, the results will be made known and, if violations are found, measures will be taken to allow the restitution of legality.