Sanders vs. Bloomberg in Las Vegas

Sanders vs. Bloomberg:
The Debate to Choose Who Will Run Against Trump

Former New York Mayor Michael Bloomberg came under fire Wednesday in his first televised debate of the Democratic race, the most virulent of the campaign to choose who will run against Donald Trump for the White House in November
———————————————————————————–
By Web Editor | internet@granma.cu 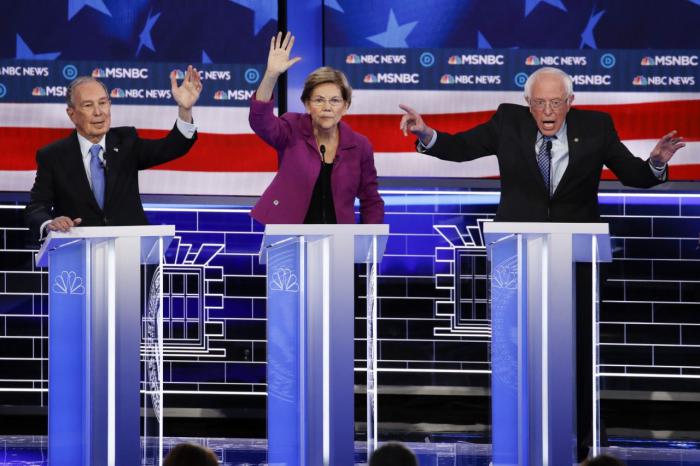 The Democratic presidential debate in Las Vegas was the debut of Mike Bloomberg and the first in which Bernie Sanders appeared as a leading figure. Photo: AP

Former New York City Mayor Michael Bloomberg came under fire Wednesday in his first televised debate of the Democratic race. It was the most virulent of the campaign to choose who will run against Donald Trump for the White House in November.

Before Saturday’s caucus in Nevada, the third state to hold its party caucus, the Las Vegas showdown was the most controversial of the nine so far, as leftist Bernie Sanders is the clear favorite among the eight contenders still in the race.

Bloomberg, who invested astronomical amounts in advertising that catapulted him to third place in the Democrats’ voting intention in just three months of the contest, was labeled an “arrogant millionaire” and questioned for “sexist remarks” and “racist policies.

Sanders, who won in New Hampshire and came a close second in Iowa, was also targeted, particularly for his universal health plan, but also for his leadership style and economic proposals.

But Sanders was not far behind.

“Mike Bloomberg has more wealth than 125 million Americans underneath him,” the senator said in one of the many bumps and bruises of the evening. “That’s wrong. That’s immoral.”

With an estimated fortune of $64.2 billion, the financial information mogul is considered the eighth richest person in the world according to Forbes’ updated figures.

Another strong exchange between the two was when Bloomberg questioned the economic claims of Sanders, who defines himself as a “democratic socialist”.

“We’re not going to throw away capitalism,” the businessman said. “Other countries tried. It was called communism and it just didn’t work,” he added, a mention that Sanders called a “low blow”.

Sanders leads the race with 32% support, ahead of Barack Obama’s former vice president, moderate Joe Biden, at 16%, and Bloomberg at 14%, according to a Washington Post-ABC News poll released Wednesday.

“Let’s choose someone who is actually a Democrat,” he added, in a setback for the independent Sanders and for Bloomberg, who was a Democrat before running for mayor as a Republican and as an independent, to finally return to the Democratic Party in 2018.

In an unusual strategy, Bloomberg decided to skip the first four dates of the competition — Iowa, New Hampshire, Nevada on Saturday and South Carolina on February 29 — to focus on the “Super Tuesday” of March 3, when 14 states vote and a one-third majority of delegates (1991) must choose the party’s nominee at the Democratic convention in July.

Bloomberg, who is shaping up to be a strong contender against Trump, another 70-something white New York mogul like himself, also was whipped by Warren, who like Klobuchar is struggling to stay afloat.

“Understand this: Democrats are taking a big risk if we just replace one arrogant billionaire with another,” he warned, equating Bloomberg with Trump by recalling that the former mayor once referred to women as “fat broads” and “horse-faced lesbians.

“Democrats are not going to win if we have a nominee who has a history of hiding his tax returns, harassing women and supporting racist policies,” he said.

During his tenure in New York, Bloomberg implemented a policy of arbitrary arrests and searches (“stop-and-frisk”), which his critics say affected Blacks and Latinos much more and for which the candidate has apologized.

“It got out of control,” he said Wednesday in Las Vegas, acknowledging that the issue “really” embarrassed him.

Despite being on the defensive several times, Bloomberg maintained his composure and his firmness, presenting himself as someone capable of defeating Trump and of governing the United States.

From a rally in Arizona, Trump took the opportunity to mock Bloomberg, whom he nicknamed “Mini” in reference to his height. “I hear you’re getting beat up tonight,” he said.

And after dismissing “Crazy Bernie” as a potential contender, he said, “We don’t care who the hell he is because we’re going to win,” as the crowd chanted “Four more years!