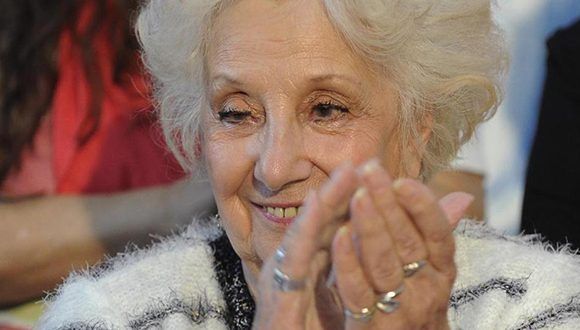 “Grandmothers of Plaza de Mayo have the immense joy of communicating the restoration of the daughter of Lucia Rosalinda Victoria Tartaglia.” In this way, the Grandmothers, who just commemorated the forty years of searching, announced from the mouth of Estela de Carlotto the meeting of granddaughter 125.

Lucia, a political militant in La Plata, was kidnapped on November 27, 1977, at age 24. Since her family knew she was pregnant, they began the search for a child born in captivity. The samples that they contributed to the National Genetic Data Bank allowed the identification 38 years later.

Lucia was born on June 6, 1953 in Santa Rosa, La Pampa. Her family called her “La Flaca”. She moved to the city of La Plata where she studied law and was a member of the Peronist University Youth. “For a year, efforts on the part of her family to locate Lucia were in vain. They, had no news of her until, in November 1978, a year after her disappearance, her brother, Aldo Tartaglia, received a first letter from Lucia where she related that she was detained.

In another letter, she said that she was pregnant and expected to give birth in early 1979, “says the statement that Estela de Carlotto just read when announcing ” Today we find another granddaughter. “

In a democracy, her family was able to rebuild thanks to testimony from survivors that Lucia was kidnapped in the clandestine detention center known as “Atlético-Banco-Olimpo”. They knew it with the nickname of “anteojito”. The survivors reported that she was pregnant and was taken to give birth while in captivity.

Federal Criminal Oral Court Number 2 convicted fourteen members of the repressive forces, including Samuel Miara, on March 22, 2011, for the disappearance of Lucia.

“Thanks to the perseverance of our search and the human rights movement, today granddaughter 125 can know the truth about her origin,” said the statement from the Grandmothers.