Home One Mass shooting per day

One Mass shooting per day

One Mass Shooting per day: Welcome to the USA 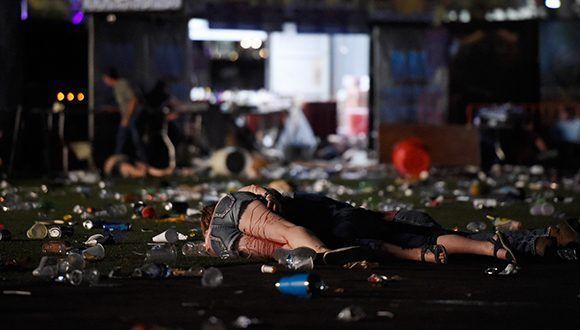 At least 50 people have been killed and more than 200 injured in the Las Vegas shooting. Photo: David Becker / AFP.

The massacre in Las Vegas was characterized as the worst case of a multiple mass shooting in the modern history of the United States, but it is a type of tragedy that has become increasingly common in recent years in this country.

According to a case count of mass shootings (defined in this calculation as one in which 4 or more people are injured or killed by an aggressor), this was number 273 of the year. It happened on the 273rd day of this year. As the policy journalist Matt Taibbi of Rolling Stone summed it up in a tweet: “a mass shooting per day: welcome to the United States of America”.

Only 16 months ago, until what happened yesterday the deadliest mass shooting in the country’s modern history, was when Omar Mateen killed 49 people at the Pulse nightclub in Orlando. Before that, the blood title and death of a mass shooting had been recorded at Virginia Tech University in 2007, where 32 were killed.

The cases of mass murder multiply with alarming frequency. Among the most remembered, in addition to the three “worst”, include the hate crime of the young Dylan Roof in an Afro-American church in Charleston, South Carolina, killing 9, in 2015, the same year in which there was a massive shooting in San Bernardino California, where 14 died; the movie theater in Aurora, Colorado where a man killed 12 in 2012, the same year that a man shot 20 primary school children and their teachers at Sandy Hook School in Newtown, Connecticut and the 13 students killed at Columbine High School in Littleton, Colorado (subject of the famous documentary “Bowling for Columbine” by Michael Moore), among others in an increasingly long list.

Since 1970, more Americans have died from guns (including suicides, accidents and homicides) than the total of all Americans who lost their lives in all the wars in the country’s history, since Independence (1776). Every day, about 92 lose their lives by firearms, recalled Nicholas Kristof, New York Times columnist.

The incident in Las Vegas already triggered another cycle of debate over the control of private weapons in this country. But this, just as it is so often, already has a familiar script and nothing indicates that this time it will be very different. Trump and the Republicans expressed their condolences Monday and cited biblical phrases, while some – not all – Democrats insist again that more control of arms has to be promoted. The National Rifle Association and its allies will be silent for a while, while as always after these tragedies, the stocks of the gun makers rose on Wall Street.

The president, his team and a good part of the Republican Party, defend the “constitutional right” to arms, and argue that with more armed citizens there will be less violence and greater security.

But in an evaluation of diverse investigations published by Scientific American shows the opposite – that more weapons in private hands lead to more crimes, and comparisons with other developed countries indicate that this is, by far, the one that suffers most from gun violence, with more than 36 thousand fatalities in 2015.

In this country, there are approximately 300 million firearms in private hands – almost enough to give one to every adult and child in this country, and a little more than a third of the households in the country report having a gun at home.

But the tragedy in Las Vegas has already generated unexpected changes: the guitarist of one of the bands at the festival declared that the experience has changed his opinion. By declaring that he had been a promoter of the right of citizens to have arms all their lives, “until the events of last night. I can not express how wrong I was, “wrote Caleb Keeter of the country band Josh Abbott Band on his Twitter account “Enough is enough … We need gun control right now. “

But the White House spokeswoman said Monday was not the time to have a political discussion on gun control. “There is a time and place for a political debate. But this is a time to unite as a country,” said Sarah Sanders.

David Brooks is the US correspondent for the Mexican daily LA JORNADA.

4 years ago TranslationsUS Society106
Neo-McCarthyism and the New Cold WarWhy is Insecurity Growing in the USA?