Memorial to Cuban Martyrs in Grenada

Inauguration of Memorial to Cuban Internationalist Martyrs in Grenada 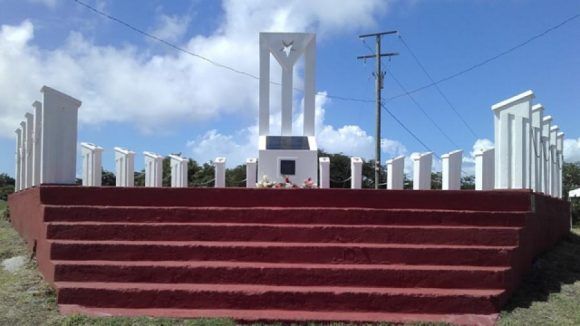 Coinciding with the 34th anniversary of the death in combat of 24 Cuban internationalists during the United States’ invasion of Grenada in October 1983, a memorial was inaugurated in their honor at the Maurice Bishop International Airport.

This Memorial is the result of the work carried out during the years 2015 to 2017 with the contribution of Grenadian graduates in Cuba, Cuban collaborators, friends of solidarity, the Trade Union of Technical and Associated Workers (TAWU), the Airport Authorities and the government of Pomegranate. It is located in one of the areas occupied by the camps of Cuban collaborators who worked on the construction of the airport in the early 80’s of last century.

The event was chaired by Nickolas Steele, Minister of Health and Social Security, representing the government and the Cuban Ambassador, Maria Caridad Balaguer Labrada. Minister Steele referred to the contribution of the Cuban collaboration to the development of Grenada, in particular to the construction of the airport. She highlighted the spirit of solidarity of of our people despite their economic limitations, while denouncing the cruel economic, commercial and financial blockade imposed by the US government against Cuba for more than 55 years.

The ceremony also included Dr. Terence Marryshow, on behalf of the Grenada-Cuba Friendship Association. He highlighted the historic relations of friendship between the two peoples and referred to the heroism of the Cuban internationalists who had fallen during the invasion. Wendy Williams, General Manager of the Airport, stressed that the Memorial is part of the heritage of that institution and will be a place of permanent tribute to the 24 Cuban internationalist martyrs.

In her address, the Cuban Ambassador expressed her gratitude for the support she received for the realization of this work. It was the result of the historic friendly relations between the peoples of Cuba and Grenada and a symbol of heroism, humanism and solidarity as an expression of internationalism. Cuban people. Ariel Jiménez, a UNECA collaborator, later conducted the solemn roll call in honor of the 24 martyrs and paid a minute’s silence in tribute.

The ceremony was attended by Senators Andre Lewis, President of the Council of Trade Unions of Granada (GTUC) and Peter David; the Ambassador of Granada in Cuba, Claris Charles; Jorge Guerrero Veloz, Ambassador of the Bolivarian Republic of Venezuela and officials of that diplomatic mission. Other government officials, Cuban collaborators, representatives of the trade union movement, friends of solidarity, graduates in Cuba and resident Cubans also attended.