Home Loving in Times of Epidemics

Loving in Times of Epidemics

Loving in Times of Epidemics

Can you live a full sexual relationship without kissing and with fear of leaving the place with more than you came in? Many people will feel unsatisfied under those conditions. 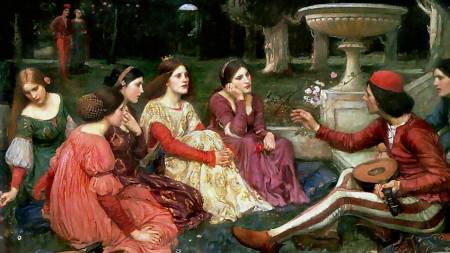 “It is a human thing to have compassion for the afflicted, and although it is convenient for everyone to feel it, it is more appropriate for those who have already had need of comfort and have found it in others. Among these, if there was someone who needed it or was loved by it, or already received from it, I count myself.

This is how the Italian Giovanni Boccaccio begins the first book of tales of the Renaissance court era, The Decameron, in which, through the double sense, comedy and youthful audacity, he recreates the duality of a Europe devastated by the plague in 1348, one of the 40 serious epidemics that humanity has recorded in its historical annals since the Roman Empire.

Seven girls and three boys are the supposed narrators of these one hundred stories, in which desacralized eroticism is the true protagonist of a daring break, not only with the mold, but also with the purpose of medieval literature.

This would be one of the essential books to revisit (or discover) in order to liven up the wait in the virulent context we live in today, and the other, obviously, is that of the immense Gabriel García Márquez: Love in the Time of Cholera.

Both have in common, besides the dangerous epidemiological scenario in which they are developed, an explicit message of hope and good judgment. Firstly, because they appeal to common sense to survive, with joy and love as antidotes to the lack of freedom unleashed by some selfish behaviors of our species. Secondly, because they show that creative isolation is the sanest of all options, if you want to get rid of an invisible and mortal enemy, but one that needs carriers to reach you.

Returning to the present, let us address one of the questions raised by the rapid spread of IDOC-19 and the quarantines imposed in most affected countries: Could the agent responsible for this emergency, SARS-CoV-2, be transmitted through sexual intercourse, like other viruses known to date?

The World Health Organization (WHO) has made it clear that the only route of transmission is through droplets from the nose or mouth of a carrier, expelled by coughing, exhaling or speaking.

This can be through direct contact or by transferring droplets onto your hands from various surfaces, such as clothing or other commonly used objects. Five seconds is enough to pick up most of the virus and bring it to your mouth, nose or the mucous membranes of your eyes in a mechanical or nervous gesture.

For now, the genital route of transmission and the presence of the virus in the semen or vaginal secretions of people who have become ill have been ruled out. Does that mean that sex in time of COVID-19 is safe?

Yes and no. First you should answer: Can you guarantee that the person you are trying to have sex with was not in contact with a confirmed patient (whether symptomatic or not), or with someone who was close to a carrier, for example, in a queue or on public transport?

Would you enjoy an intimacy where hugging and kissing are prohibited? You may try to play from afar or try positions where faces are distant… And when passion takes hold, what will you do to keep your sanity, health, and potentially your life in a very short time?

The proximity implicit in intercourse facilitates the inhalation of particles expelled by your sexual partner, whether you want to or not. Therefore, those who have casual relationships with strangers are at greater risk (including being required to violate the recommendation not to go out unnecessarily), and the greater the number of such exchanges, the less likely they are to ensure that those people (and those who were in their beds before you) are not infected, even without feverish symptoms or respiratory disorders.

It should be noted that the risk is the same for those who have carnal sex, talk face-to-face or kiss, and the latter is the quickest way to get the virus.

If it is your stable partner, the one you love and want to be healthy, you have two options: either wait to be in isolation long enough to know that both are out, or take it as any other time in the relationship when you needed to distance yourself and kept love alive by other, more innocuous and equally useful ways to feed the passion. The third would be to add the nasobuco in a role play, perhaps personifying thieves and maidens…

One last question: Can you live a full sexual relationship without kissing and with fear of leaving the place with more than you came in? Many people will feel unsatisfied under these conditions and will prefer to postpone the encounter, among other things so as not to develop sexual dysfunction due to anxiety or distracting fear. Others will take up the challenge and appeal to their imagination (or technology) to take care that the malicious virus does not take over in the sacred space of their sexual life. You decide which side to be on…

1 year ago Juventud Rebelde, Translationssexuality0
The Science of ApplauseA World Without Movie Screens