Home The Science of Applause

The Science of Applause

The Science of Applause

As we clap to lift the morale of thousands of health workers, we search out the specialists

Translated by Merri Ansara for CubaNews.
Edited by Walter Lippmann 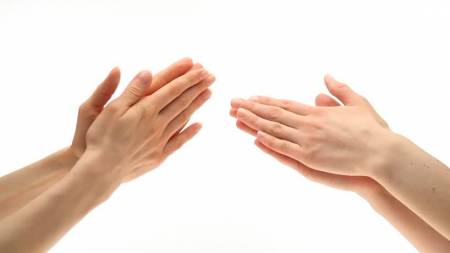 One of the issues that we have valued much more since the beginning of the current pandemic is the work of every worker who has been kept in place. From artists who play for us in their homes, to street sweepers who stay in the streets, bakers and cooks, caretakers of the elderly, traffic inspectors, teachers who give digital classes on their own initiative… and yes, them, the everyday doctors, whom we applaud at agreed hours, a gesture that seems to us still small in the face of their daily greatness and which in countries like Spain has become almost religious in its fulfilment.

These are also days when we have to learn to deal with matters in an intelligent way. That is why this time Detrás de la ciencia goes in search of that mystery of hundreds of people clapping their hands on their balconies as we Cubans do every night. Is the applause an exclusively human gesture? How did it come about? What are the secrets of its contagion? What does science know about this social phenomenon?

Most human beings just beat the palms of their two hands rhythmically. In some sectors there are variations. There are universities where tables are beaten when a lecture is over, or the well-known clapboards of tobacco farmers, for example. But, in general, applause is an expression of admiration for a well-done performance. And we find it so natural that we might come to believe it is part of our DNA.

Joaquim J. Vèa, a Catalan primatologist, has explained the human exclusivity of applause, quoted by the magazine Quo: “After many years studying primates in the forests, I have never seen a (non-human) primate applaud”.

This phenomenon is discovered totally socially. We are not born as a species knowing what applause is in its current concept. We need to learn it in society. History, then, is a science that has much to say about it.

The emergence of the custom dates back to ancient civilizations. The ancient Greeks expressed their approval of plays by cheering and clapping their hands. The Romans preferred to snap their fingers, but they also clapped and waved the tips of their robes, or used special strips just to generate a sound of admiration.

It is often said that Emperor Nero paid nearly 5,000 people to applaud his public appearances. They would practice two types of applause: imbrex, with hollowed-out hands, and testa, with flat hands.

Over the centuries, several sounds alternated in the taste to express approval of a show: whistle and even spit became among the favorites, widely used in the seventeenth century.

The churches, both during the Middle Ages and much later, in the Protestant era, played an important role alongside the theater, in the social development of applause. But even when the Catholic clergy forbade these manifestations at masses, coughing, humming or blowing through the nose became the way a brilliant sermon or a well-toned chorus was approved.

But this journey does not yet answer: why do we do it, what human needs do we satisfy in this very contagious cultural fact?

Think and feel your applause

Psychologists say that any form of applause satisfies the human need to express an opinion, a euphoric emotion, and the need to communicate with a protagonist with whom we cannot engage in a conversation in person. Social psychology specialists also explain that applause gives the audience the feeling that they are participating. Since the audience cannot pat the actors on the back, they applaud.

Another mystery studied by psychologists, which was published in a study in the journal Nature, by the way, was the highly contagious nature of applause.

The specialists who analyzed thousands of recordings of massive applause in different parts of the world concluded that the great contagion of applause is not due to the imperiousness that is recognized in itself, but to the social nature of the act of applauding.

Another study, from Uppsala University in Sweden and published in the Journal of the Royal Society Interface, sets out mathematical models for measuring applause in a social group, and shows that if a person starts clapping 2.1 seconds after a lecture or presentation ends, 0.8 seconds later the whole group starts clapping, whether they like it or not.

“We used the selection of the Bayesian model to test several hypotheses about the spread of simple social behavior, applause after an academic presentation. The probability that people will start clapping increased in proportion to the number of other audience members already ‘infected’ by this social contagion, regardless of their spatial proximity,” explained the lead author.

The Greek Plutarch (46-127 BC) says that due to paid plaudits, for example, Philemon of Syracuse (361-263 BC) managed to surpass the famous Menander (342-291 BC) several times in theatrical performances, not necessarily because he surpassed him in the dramatic.

The Physics of Palms

But science, this time physics, has discovered more than mysterious features of this social action. The authors of an article on applause published several years ago in Nature pointed out that they alternate in periods in which the ovation is an incoherent sum of palms along with other periods in which the audience applauds in a rhythmic and synchronized way, and they verified that in the synchronized applause the frequency of the palms of each spectator is half that of the incoherent applause.

The dynamics of the group applause was summarized: at the beginning of the ovation most of the applauses are enthusiastic and synchronization is not possible; but after about ten seconds the spectators reduce to half their applause frequency and a synchronization period begins. If you are a ballet lover, you will not let these scientists lie.

The journalist Juan Manuel Rodríguez Parrondo explained it this way: “Imagine that at the end of a play you have especially liked and you applaud as you would in the theatre; count the number of palms you give during ten seconds and obtain the frequency of the applause; repeat the experiment, but imagining that you are in the situation of synchronized applause. You will see that the frequency in the second case is about half that of the first.

This mystery of frequency doubling and synchronization of applause is a widespread phenomenon in nature and there is no particular reason for it, but it has been proved that nature likes periodic oscillations.

Heart rhythms, menstrual rhythm, the swing of a swing… Thus, a person tends to always applaud with two frequencies, one double the other, depending on his or her enthusiasm. But in short, it seems to be true that we have an unconscious attraction when we synchronize our applause with the rest of the audience.

Which of these scientific explanations do we put into practice when people from various regions of the world go out to their balconies to give their doctors a standing ovation? Probably, the psychological explanation of wanting to be part of something, of communicating with actors that we cannot pat on the back, this time, the best actors and actresses: all the health personnel who every day put themselves in the line of battle against the virus that is plaguing us. To compensate us, the Spanish clinical psychologist Juan Castilla assures us: “It is an invaluable gesture. We are not aware of the positive impact this generates”.

2 years ago Juventud Rebelde, TranslationsCovid-19, psycholo, psychology0
Let It Not Be SaidLoving in Times of Epidemics