Home A World Without Movie Screens

A World Without Movie Screens

A World Without Movie Screens

by Julio Martinez Molina
Audiovisual critic and journalist, member of the Cuban Association of the Film Press and UNEAC. Author of the books published on film criticism in North America and the end of the century, Causes and Influences of Contemporary Cinema and Haikus of My Filmic Emotion. From his blog, La Viña de los Lumiere
March 16, 2020 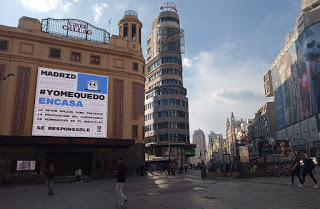 Whether or not it is a bacteriological weapon of the United States aimed at slowing down China’s advance, the coronavirus has seriously affected the world economy; especially that of Washington’s main rival, yes, but its overall effects reach a planetary scale, including the northern nation itself.

The saddest images of the harshest dystopias are now verified, not in book pages but in real scenarios characterized by desolation. What happened or is happening in nations such as China, Iran, Italy and Spain surpasses any science fiction or fantasy narrative.

A world on edge sees closed borders, has confined millions of citizens, separated regions and blocked the entry of tens of thousands of people.

This attack on humanity does not understand geography, economic classes, or climate. Nor of fields, sectors, industrial universes and the entertainment industry. The latter is experiencing a very strong contraction at a global level, except in streaming giants such as the American platform Netflix or in the pornography industry, an emporium that annually moves more money in the US than the NBA. The same coronavirus has even been a callous theme in several “adult films”.

Now, beyond such exceptions or others very pointed, the turn suffers the biggest cliff in its history. The plunge in ticket sales meant a 45 percent drop this weekend in the U.S. and Canada. In the main cities of both nations, theaters were closed during the night of Sunday the 15th. The start of the closures was marked by China on February 2, when the Alliance of Radio, Film and Television Production Committee and the Federation of Radio and Television Association directed film companies, production teams, actors and actresses to cease work.

Both there and in the US, India (the country that produces the most films per year in the world), France, Spain and Italy paralyzed film activity. The Los Angeles Times reports that “the Fast & Furious franchise has decided to postpone the release of its ninth film for a full year. Neither will the new James Bond film, No Time To Die, a decision made several weeks ago to postpone the release from April to October. For its part, the Disney giant’s coronavirus agenda could not have been worse: Its big bet for spring was the new version of Mulan, a film that, for obvious reasons, has the Asian market as its main focus.

“After postponing Mulan’s global release and closing its theme parks, Disney has taken another drastic decision to curb the coronavirus: to suspend production of all its films, with animation as an exception. This way, the new version with real actors of The Little Mermaid will delay its shooting, which was going to start soon in London, as well as William of the Bull’s thriller Nightmare Alley, Ridley Scott’s drama The Last Duel and the next installment of Home Alone. The new Peter Pan and Wendy, as well as Shrunk, a sequel to the 1980s classic Honey, I Shrunk the Kids, were also delayed, although both were in early pre-production.

“Disney’s decision affects a large number of studios the company owns, such as Fox and Searchlight. Marvel, also under its control, suspended the filming of Shang-Chi and The Legend of the Ten Rings, after its director, Destin Daniel Cretton, has been isolated by his own decision. The Mickey Mouse factory has also suspended some 16 television pilots for the same reasons. They have also interrupted filming in other different studios such as Mission: Impossible in Italy, Official Competition – with Penelope Cruz and Antonio Banderas – in Spain, and The Amazing Race” competition around the world. And preparations for filming the biography of Elvis Presley have been slowed down after one of his protagonists, Tom Hanks, tested positive for the coronavirus in Australia,” says the half-Angelian.

Shooting on Sony’s Budapest-based The Nightingale, starring sisters Elle and Dakota Fanning directed by France’s Melánie Laurent, also stopped. The Malaga (Spain) and Guadalajara (Mexico) film festivals were cancelled. And so, unstoppable is the rosary of news that arrives every morning.

It has been published that the losses may frustrate the five billion dollars, a peak that I consider extremely low given the circumstances.