Home Love Speaks Through the Ears

Love Speaks Through the Ears

Love Speaks Through the Ears

Two decades ago, love was born between Irela and Hugo while they were studying at the Universidad de Oriente. Their relationship became strong despite misunderstandings and prejudices, and today it can be told “on board” of cinemas, books and confessions 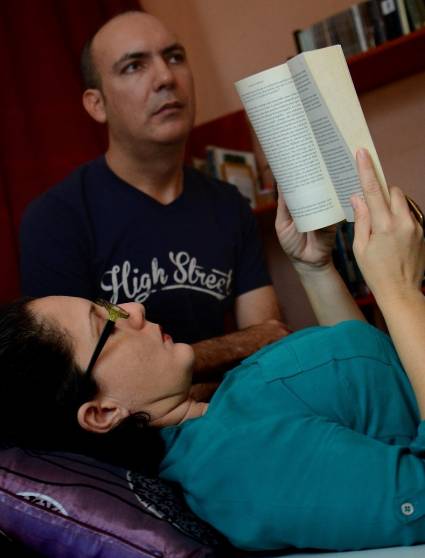 The dark room lights up with every jump of the stage on the big screen. When that happens, even from the back chairs, you can guess the romance. She, with her rebellious curly hair; he, too, with a cascade of hair that spreads across his back.

She whispers something in his ear; he nods without moving his eyes from the big screen. There is a sui generis complicity between these two lovers who whisper so much in their seats. They seem to talk more than they see. They roll the credits, turn on the light and there she is, squeezing her left hand and avoiding him to stumble in the crowd that comes out of the Santiago de Cuba cinema.

Her name is Irela Casañas Hijuelos, she studies Sociology and is not disabled. He is Hugo González Diéguez, future psychologist, and blind due to retinitis pigmentosa as a child. They are holguineros and live the hard 90’s at the Universidad de Oriente. When they can, they escape to the cinema or to a concert at the Sala Dolores.

“At that time Almodóvar’s films were released and she always described them to me.” Hugo speaks as if he were recalling passages from a life he is grateful for. Twenty-two years have passed, his hair is no longer long, but he does not forget Irela’s words in his ear: “They were those other eyes that are needed to enjoy a good work of art”.

When they met, Irela was starting her first year and Hugo was in third. They shared a taste for rock and literature, had common friends and met in the Peña de los Raros.

“The first qualities that attracted me to him were the freshness of his character, his positivity, his spirit,so warlike, but at the same time so ethical, generous, that he faced life with a lot of peace and courage. That’s why I began to admire him and the friendship began to turn into love. Without any kind of prejudice, he did not limit himself to telling me that he loved me. I didn’t limit myself either and let that be born.

He listens to her every word with patience, and assures us that he fell in love with “her sensitivity, her intelligence, her joy, and also her naturalness, her desire for knowledge and life experiences. He could not see her, and yet he saw her.

Love and the physical

It wasn’t love at first sight. Logically. Hugo had never even touched her to know what she looked like, but her voice and her personality bewitched him.

“Saint-Exupéry said that the essential is invisible to the eyes; that one can only see well with the heart. For me, above all, love is sympathy, a connection between two souls who find points in common. I liked her voice very much because it was pleasant and feminine, without resorting to subterfuge to please. And it is scientifically proven that smell is very important in attraction. That, and our affinities, were fundamental”.

Irela says no, that she was never afraid, that “it is society, with its hostile views and labels, that tells you, ‘Look, there is fear. You have to know it.” But I wasn’t afraid to let the relationship flow. It was something so natural, so beautiful, that we didn’t question anything and started to grow together, to enjoy each other.

Hugo, on the other hand, was afraid. But his was not the fear of others, of the questioning of others. He was afraid of the possibility of rejection. “When you care for someone very much, as I did for her, that’s what happens. It was very important that she accepted me and felt for me what I was feeling for her.

Irela was always a determined young woman, free as her curls, and judicious, confident. She cared about the acceptance of her own – who wouldn’t? – but that was not what would define the future of her relationship with Hugo.

“There was a little fear in my family, but when they realized that our relationship was very serious, that I was not going to give up, they began to accept my decision. Besides, with Hugo’s character, his authenticity and his noble and positive spirit, it is impossible not to admire him.

And they admired him. Or better yet, they admire him. Hugo is as grateful as he acknowledges his parents for never having been an obstacle: “I was always independent. They saw that step of mine as another sign of my way of being, and they supported me”.

At home, Irela reads you the subtitled films, and describes the visual works when they go to an exhibition. They almost always hang out together, except when she goes to La Mezquita publishing house, where she works, and he enters her office as a clinical psychologist at the Pediatric Hospital.

But what unites them most – besides love – are words. They both write. Their passion for literature is another bond, another link, and it has helped them to drive each other forward.

“I dedicated my first book to Hugo; although I read since I was a child, he helped me rediscover literature and start writing”.

Irela has published two books of poetry and one of essays. Some time ago she was a literary editor at Ediciones La Luz, and her professional experience has been vital to him as well: “Because of her work, she is an implacable critic of my texts when she has to be”.

Hugo published a book of poetry and has another one in the process of being edited. He says that Irela does not praise without reason. He knows her and she inspires him: “She is my fiercest critic and, at the same time, my best muse”.

“Many people have asked me, ‘Are you two brothers? They do not understand how it is possible that, with my disability, I have such a beautiful and intelligent woman. They also ask me if she is blind or visually impaired; but there is no doubt that, in the eyes of society, she is more exposed because she is a woman and because she does not have the disability.

Hugo’s reflection is sharp. For Irela, it certainly seems to have been more difficult: “I have suffered harassment from unknown men who have seen me with him and said unpleasant things to me. But what struck me most, at the beginning of my return to Holguín, was that some people, supposedly very liberal because of their cultural work, said indirect phrases to me that denoted prejudice; although it is important to clarify that we have always received many more signs of friendship than of prejudice”.

“We try to make everyday life not just mean staying alive, but that life is beautiful, diverse. Thanks to the support of his family, we have our own house, in which we share the housework. He, for example, likes coffee because it gives him the exact amount of sugar that we both like. I sometimes go a little overboard,” Irela accepts and laughs happily.

Hugo laughs too. And both confess that they try to read, enjoy an audio-commented film, and be surrounded by friends… but together, always together, without untimely jealousy, because “they show little confidence in themselves. We are not jealous and that security protects us. For me it’s not a problem that she can watch and that I don’t notice. I know what I am worth and how important I am to her.

They walk the Holguin streets talking, laughing, waving… They go hand in hand looking for the shadow, if there is one. They transmit serenity, and also something unusual, difficult to translate with words, which perhaps has to do with their way of understanding life.

“We enrich the routine: I practice yoga and he does the Tibetan rites. Besides literature, he loves football: he’s a Real Madrid fan,” she says, and Hugo adds other ingredients to a love recipe they have been perfecting for more than two decades:

“Irela and I have built a couple without secrets. There is trust, respect and complicity. She’s not just my wife: she’s my partner, my accomplice. We love each other, but we are also friends.

And the confession brings them back to that Santiago cinema of his youth, where she narrated the film to him in a low voice while he felt that love spoke to his ear.

2 years ago Juventud Rebelde, Translations0
In the Name of LoveBetween You and I, Can There be Another?