Presented as an unprecedented social explosion, the events of this Sunday in the country constitute a chapter -and not a premiere- of the so-called non-conventional war.

With the accumulation of more than six decades of blockade, the impact of the 243 measures adopted during Donald Trump’s administration -all in force until today- and the wear and tear of the already prolonged confrontation with the coronavirus crisis, now at its worst moment since its appearance in the archipelago in March 2020, it would seem that Cuba is witnessing the “perfect storm”.

Lester Mallory, the former Deputy Assistant Secretary of State for Inter-American Affairs, who died in 1994, would be rubbing his hands and boasting that it has been worth waiting 61 years to reap the fruits of the doctrine that he and his advisors conceived, drafted and did not hesitate to put on the table to the Eisenhower administration so that it could be applied.

Faced with the undeniable support of the people for the nascent Revolution, which is precisely the same that keeps it alive and well to this day, the official provided the US government with a secret memorandum containing the essence of the genocidal policy to be followed to the letter in order to overthrow the surprising revolutionary project, which by then (April 1960) was already a thorn in the empire’s side.

“The only foreseeable way to subtract internal support from it (he refers to Fidel and the Revolution) is through disenchantment and dissatisfaction arising from economic malaise and material difficulties… all possible means must be quickly employed to weaken the economic life of Cuba…. a line of action which, being as skillful and discreet as possible, will achieve the greatest progress in depriving Cuba of money and supplies, to reduce its financial resources and real wages, to provoke hunger, despair and the overthrow of the Government”, reads verbatim the document which, with greater or lesser rigor, has guided imperial policy against Cuba up to the present day.

In the fruitful television appearance this Monday, at the request of the First Secretary of the Party and President of the Republic, Miguel Diaz-Canel, Rogelio Polanco, a member of the Secretariat of the Central Committee and head of its Ideological Department, confirmed an irrefutable truth: although it is presented by certain media as a social explosion, what we have experienced this Sunday in Cuba constitutes a chapter of the unconventional war.

Indistinctly called hybrid warfare or color revolutions, fourth-generation warfare, or soft coup, the strategy followed against Cuba is part of a manual that has been rigorously applied in several countries, both in the Middle East and in Europe and also in Latin America -Venezuela, for example-, a perverse system, scientifically conceived, which, as it is easy to notice, has communicating vessels with the famous Lester Mallory’s memorandum.

Unconventional war has an important media component, now increased with the development of social networks that facilitate the generation of false news, misrepresentation, manipulation of facts and so-called half-truths, a world in which Cuba puts the news day after day and almost minute by minute, under the protection of a flourishing colony of media that presume to be independent and impartial and always have at hand the voice of an influencer or “a source who preferred not to reveal his identity”.

In this concept, nothing is more important than discrediting institutionality, denying the impact of the blockade and presenting the shortcomings that the world’s greatest power has been creating for 60 years with its web of laws, obstacles and threats to third parties, as the exclusive result of the ineffectiveness of a supposedly corrupt and obsolete government.

Another element consubstantial to this foggy but equally cruel and effective war modality is the promotion of street violence, which showed its hairy ear this Sunday in some places of the country -Güines and Cárdenas, for example-, with images of youths assaulting a store or overturning a police patrol car, the same photos that these days were on the front pages of important news media.

Provoking the forces of law and order, inducing repressive actions, seeking international condemnation, all secured from the media point of view, are also part of the ABC of unconventional war. It has been applied against the island and sustained with not inconsiderable sums of money, a “financial courtesy” whose most recent amount has just been made public in these same pages.

President Joe Biden, who pledged, not to us, but to the American electorate, to review the Trump administration’s policy towards Cuba -the last of whose measures was to include it once again on the list of state sponsors of terrorism-, then diluted along the way with the statement that it was not a priority or that he was conducting a detailed study of relations, something that six months ago seemed even logical, but today sounds very different.

What is suspicious is that only a few hours after Sunday’s events, originated in the first place by the policy of asphyxiation that his administration may not have designed, but has assumed as its own, officials of his government, and he himself, are sticking their noses into the neighbor’s problems.

Foreign Minister Bruno Rodriguez, a member of the Political Bureau of the Party, recently told the United Nations General Assembly: “Cuba’s demand is to be left in peace”, and President Miguel Diaz-Canel reiterated it, in other words, this Monday: “We are not interested in what may happen within the conception of how the government and the American people want to make their system of government, but we do demand that they respect our self-determination, sovereignty and the way in which the majority of Cubans have agreed to defend socialism”.

The haste with which these characters came out to show solidarity with the vandals, while blaming the Cuban government, reveals the interventionist approach that is being promoted and financed from abroad: 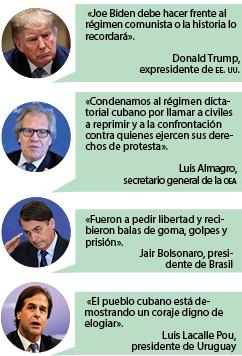