Home Iran has grown in resistance

Iran has grown in resistance

Iran has grown in resistance

In 40 years, the Islamic Republic of Iran has resisted all kinds of compromises on the part of the United States, in the imperial eagerness to destroy the Revolution 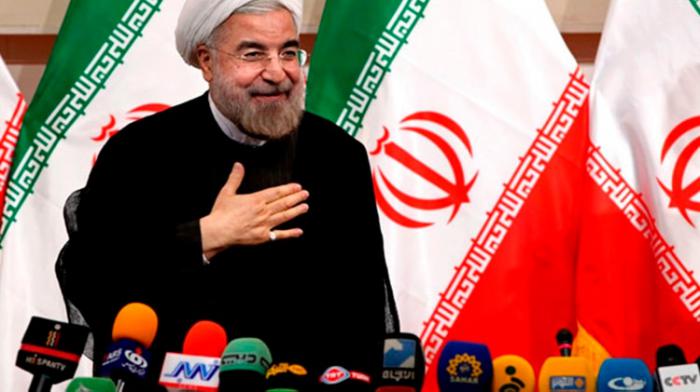 This economic war has been imposed on us, but we will stand,” said Hasan Rohani, Iranian president. Photo: AP

In 40 years, the Islamic Republic of Iran has resisted all kinds of compromises on the part of the U.S., in the imperial eagerness to destroy the Revolution.

There have been four decades in which significant advances have been made as a guarantee that its project looks towards the present and future, from the economic, scientific and peaceful nuclear development, among other achievements.

That February 11, 1979, the founder of the Islamic Republic, Imam Khomeini, who had returned to the Persian country after 15 years in exile in Iraq, Turkey and France, became the leader of his nation until his death in 1989.

According to Ayatollah Ahmad Yanathi, the current president of the Assembly of Experts, “Khomeini succeeded in restoring the dignity of Islam and taught the population to fight against the humiliation of the West.

History recalls that, in 1951, Iran managed to establish the first democratically elected government and as leader held the post of Prime Minister, Mohamad Mosadeq, who nationalized the country’s oil industry.

Two years later, in 1953, the U.S. and British intelligence services staged a coup d’état and wiped out the popular government of the time and entrenched Mohamad Reza Pahlavi in power.

Today, the same enemy of that time – the governments of the United States and its ally Israel as a spearhead – maintains and increases the threats against the country and applies more and more economic sanctions with the aim of surrendering to the population.

An unprecedented and very characteristic event of the current US administration of Donald Trump was the unilateral break with the Nuclear Agreement signed by Iran and five other powers in 2015, considered one of the greatest achievements in international relations in recent decades.

In that imperial greed that takes no account of the people at all, National Security Advisor John Bolton assured last year that Iran would not celebrate the 40th anniversary of its Revolution, frankly threatening to reverse that nation’s revolutionary process.

The Islamic Republic of Iran, whose project in all orders has its vision in the autonomous development of the different fronts, including the military, exhibited during these days of celebration a long-range missile with a radius of 1 350 kilometers.

The Iranian Ministry of Defense presented the new cruise missile called Hoveize, manufactured locally and successfully tested, according to the ISNA news agency. The authorities claim that their missiles are only defensive and deterrent.

According to Hispantv, with the victory of the Islamic Revolution, Iran designed great objectives such as economic independence, self-sufficiency, the creation of jobs and a standard of living for its citizens.

Among its achievements is the significant reduction of poverty in the country. In 1977, according to the World Bank, 46% of Iranians lived below the poverty line. This figure dropped to 8% in 2015, according to a World Economic Forum report.

Although Iran is ranked among the developing countries, it has made great strides in aerospace, becoming one of the pioneers in the field. In 2009, it launched its first home-made satellite, Omid, to join the small club of nine countries with such capacity.

Its scientific achievements also stand out in biotechnology. Genetic engineers have started important research in recent years, which has resulted in the production and export of dozens of biomedicines.

Iran is among the top ten countries in the world in stem cell research and technology. It has recorded great successes in animal cloning. It has also excelled in bone marrow transplantation, occupying the second position on the planet, after Italy, reported Hispantv.

The Persian country, undoubtedly, has made resistance a major reason, first to defeat their enemies and then to develop the people and make the nation self-sustainable.

An example of these days is the decision of Iran and Russia to use their national currencies in reciprocal exchange, which implies dispensing with the U.S. dollar.

3 years ago GranmaIran0
ButterPlastic Bags Alive and Well in Havana