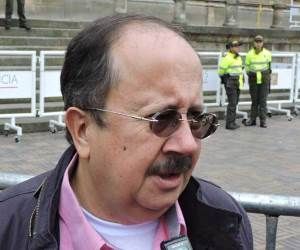 FARC-EP commander Andres Paris announced Sunday that the FARC-EPplanned to hold the founding congress of its political party next August 7, a step that should occur once the disarmament of the Colombian guerrilla has ended.

The leader of the Revolutionary Armed Forces of Colombia-People’s Army (FARC-EP) commented that such a meeting will be a forum for social justice, peace and democracy.

Referring to the implementation of the agreements signed last November 24, Paris said that, although some phases or aspects contained in the historic document have been fulfilled, there are still many outstanding issues and in some cases there is deep irresponsibility.

Some 7,000 men and women of that group remain concentrated in 26 places in the country where they will leave the weapons in their possession and will be prepared with a view to their reincorporation into society.

The FARC-EP leadership has criticized the government’s delay in enabling such sites, which also delayed the early stages of the abandonment of arms, which is overseen by a United Nations political mission.

Despite the setbacks, we are persisting in the discussion of all the mechanisms and instances established to carry out the treaty and its implementation, he said.

Asked about the possibility of this disarmament ending on the initial date (at the end of May), he replied that he also doubts whether the Executive will honor the commitments contained in the November 24 consensus.

The FARC-EP can not be subjected to unilateral compliance, but we have expressed our willingness to solve problems in the best possible way so that the implementation period can continue satisfactorily, he insisted.

The former fighter said that, so far, only about 20 percent of the agreement has been carried out.

Paris attended the closing of the National Peace Congress held in the emblematic Bolivar Plaza after the presidents of the Senate and the House of Representatives vetoed the entry of both guerrilla commander Iván Márquez and one of the leaders of the rebel National Liberation Army (ELN) to the salons of the highest legislative body.

We were not allowed to enter Parliament but we took Bolivar Plaza a scenario more suited to continue fighting for the peace process. In that event we achieved a  congruence of our proposal with the desire of the Colombians to end the conflict in all its expressions, he said.

According to Paris, the reaction of the heads of the House of Representatives and the Senate shows that there are sectors hiding in both institutions.

The Peace Congress, he added, achieved a convergence of civil society with the aim of demanding that the current administration comply with the agreement.

The November 24 pact includes among its measures the establishment of a bilateral cease-fire, already in place, as well as the transformation of the countryside through a comprehensive rural reform associated with the gradual replacement of illicit crops by other crops with the cooperation of the communities.

The text provides for the creation of the Special Jurisdiction for Peace (JEP) under which courts will be established to investigate, prosecute and punish those responsible for confrontation under the premises of zero impunity for crimes against humanity, but grants benefits of pardons and amnesties in cases of political and related crimes.

A similar agreement with the ELN, which is less numerous than the FARC-EP but active for over half a century, remains in the search for a more lasting and more encompassing detente scenario.

Talks with the latter group began on February 7 in Quito, Ecuador.

Prolonged for more than five decades, the internal war has left some 300,000 dead, almost seven million displaced from their places of origin and at least 60,000 disappeared.

5 years ago Translations62
Unity Also in DiversityThe Drama of the St. Louis in Havana, May 1939