Home Estela Bravo: The Many Eyes of Her Camera

Estela Bravo: The Many Eyes of Her Camera

Estela Bravo
The Many Eyes of Her Camera
By: Gilda Fariñas Rodríguez
Posted: 08/10/2015 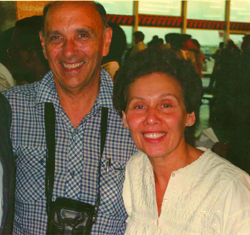 The United States, 1953. The call is to meet in front of the White House in Washington to support the campaign for the lives of the couple Ethel and Julius Rosenberg, condemned to die in the electric chair *. Estela Bravo is a 20-year-old daughter of a union leader, studying sociology and working for the furrier’s trade union in New York. Before leaving, she buys an eight-millimeter camera to film what would happen at the rally.

Upon arrival, two children catch her eye. They are the small Rosenberg children who are next to the demonstrators demanding mercy for their parents. That painful image is the first to be captured with her camera. Images and facts mark and set the course of her life. “I could not believe they would do something like that to you. That execution of the Rosenberg couple was always with me. “

This defined Estela Bravo’s existence from the political and personal point of view. That same year, she traveled to Europe as part of the delegation of her country participating in the Fourth World Youth Festival in Bucharest and the Third World Student Congress. In Warsaw, she also came to know Ernesto Bravo, the Argentine student leader with whom she has shared love, home, three children, two grandchildren and an impressive cinematographic work for almost 60 years.

Married in Argentina in January 1956, Estela and Ernesto decided to settle in Cuba, in 1963, after he received a contract to work as a professor of biochemistry at the Faculty of Medicine of the University of Havana. She also does radio and television programs and organized the memorable Encuentro de Cancion Protesta (Protest Song Encuentro) in 1967. It was an event that would lead to the creation of the Center for Protest Song that Estela herself would direct.

From that event, she kept some memories that she now shares with Mujeres. “The first time the song Hasta Siempre, Comandante was sung, was in that Encuentro. Carlos Puebla wrote it when Che Guevara left Cuba. It was also the first time that Silvio, Pablo, and Noel sang together. “

It was in this same Casa that the multiple-award-winning filmmaker returned. Now, to donate to the archives of the Library a part of her more than 50 documentaries. With these she has registered the diversity of contexts and realities, with its human and divine conflicts, its migratory processes, its good actions, its political and social complexities, their barbarities, their injustices, their wars, their peace pacts, their joys, their dramas, their heroics, testimonies and truths that shake and hurt as they fill the soul with tenderness and love.

There they are to confirm it Those Who Left, Los Marielitos, Missing Children, Debtor Children, Holy Father and Glory, Cuba-South Africa, after the battle, Miami-Havana, Nelson Mandela in Cuba, The Excludables, Operation Peter Pan, Closing the Circle in Cuba, Fidel, The Untold Story.

FROM NEW YORK TO HAVANA, THE BRAVOS

New York University (NYU) is facing the arduous and expensive task of digitizing the filmography of Estela and Ernesto Bravo. It is a project that will guarantee the durability of this historic and universal heritage.

“We needed to clean up and digitize many of our files. NYU kindly offered to do the work. That is a very costly process, and we do not have enough resources to conduct it. We must bear in mind that each material was filmed and recorded with formats and equipment that are already obsolete,” Estela explains. She thanks the cooperation and donations received from “people who appreciate our documentaries to finance the digitization of films .”

Last January, Casa de las Americas received the good news that the Bravo couple had decided to donate much of that restored material.

“We already have other documentaries, passed on to the new technology, in our hands. That way, all the documentaries will be in the libraries of New York and of Casa so that the public has free access to them, which gives us great satisfaction “.

With marked jubilation, Estela mentions a message sent by NYU where she lea that they had shown, “the film Conversando con García Márquez on his friend Fidel in this center for advanced studies. A hundred people were unable to get in. It was all a success!”

THE VOICES OF HER CAMERA

It’s a Sunday in April at midday. Estela Bravo opens her home and part of her life to Mujeres magazine. We spoke in a room where there are plenty of portraits of her children (two women and one man), as well as her two grandchildren (woman and man). Pictures with posters of the Protest Song Encuentro and some works of art cover the walls. A picture of wood stands out. Estela is smiling between Nelson Mandela and Fidel Castro. It’s an image of which, of course, she is very proud.

“It was in 1991. It turns out that Mandela and I were talking at a reception where Fidel was coming to speak, and that’s when we took the picture. Having been there makes me feel very special; to be a woman with enormous luck because it is to be among the two most certainly important men of our time. I met Mandela in Namibia, during the celebration of Independence Day; From that moment I’ve also kept a photo with him. Later I saw him again when he was in Cuba.

There are many other images of memorable moments for Estela. These figures confirm the intensity with which this woman, born on June 8, 1933 in New York, has lived and created: major world leaders, political and religious figures, social leaders, artists, poets, writers, dear friends and friends and protagonists of her documentaries. In addition to numerous prizes, decorations, and memories that she leafs through with the same nostalgia with which she reads the small note next to a drawing, sent by the (recently-deceased) Uruguayan writer, Eduardo Galeano. “I would like to have as many eyes as the camera of Estela Bravo.” She is silent for a few moments, and her eyes seem to be damp.

Respectful of her sadness, I remain silent. She smiles with a warm tenderness as if distressed by the raw quality of her memories. So we talked a little more about her audacious cinematic experiences.

“My career has not been without difficulties when filming, to obtain testimonies, although that happens to every person seeking information. However, I have always received help from many people, and many doors have been opened to me. In the end, I feel a deep satisfaction because the public sees my films, comments on them, they stop me in the street … and that gives me the biggest bliss “.

Are you fond of a particular documentary?

“I am fond of each of the works we have done. Because if, through a film, we can transmit to people what we feel, then we make the stories of many people imperishable. Certainly, there are some jobs that one wants more than others, for example, Operation Peter Pan … Today I maintain ties with all those young people. Similar affection provokes me The Found Children of Argentina, for which I remained a great friendship with Estela Carlotto, president of the Grandmothers of Plaza de Mayo. I remember when she found her grandson (who is 114[?]) I went back to the documentary and added it at the end. We even made a new version that ends with the testimony of her embracing her 37 year-old grandson.

“The film The Holy Father and Gloria is the most-awarded of all that we have done. Personally, I have a deep affection for this documentary, as well as Carmen Gloria **, her protagonist who is married today and has a beautiful girl. “

“I’m almost 82 years old. I cannot believe it! It is no longer the same, but I will always try not to stop working. Right now we are immersed in a new production, but I do not want to speak, for the moment, of what we are doing. “

Even if she does not want to reveal to this magazine the details of her new documentary, it is evident to us that once again we will be confronted with stories, experiences, dramas, and joys, images and voices captured in an exceptional way by this woman’s brave camera.