Package agencies, which do not have official contracts with Cuban companies, are engaged in the illegal trafficking of goods from abroad. For this purpose, they use the route of passengers who accept to bring different products in exchange for payment or compensation. The General Customs of the Republic faces these phenomena with rigor and intelligence
Posted: Wednesday 06 June 2018 | 10:08:01 PM 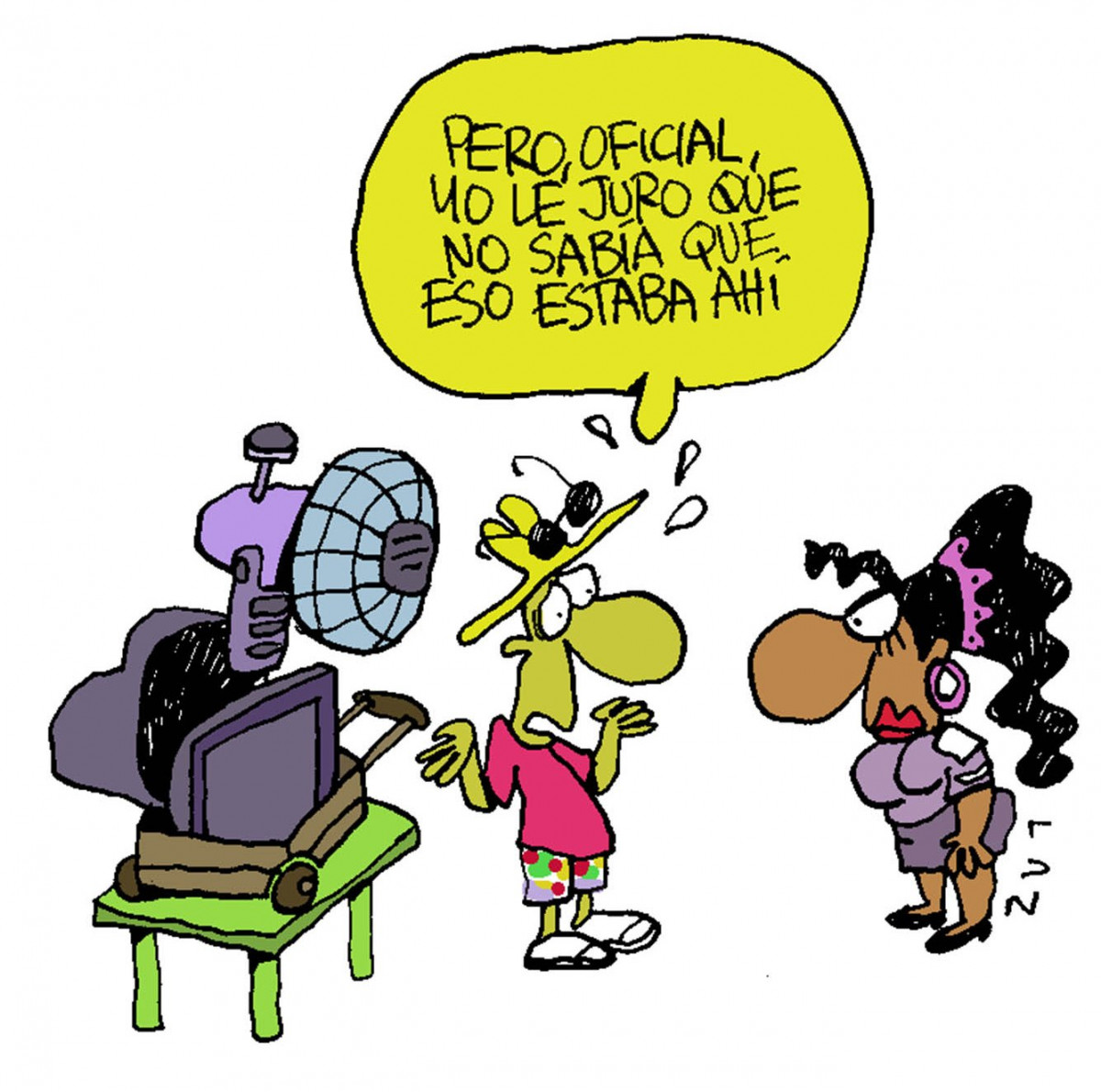 TRANSLATION: “But officer, I swear I didn’t know this was here!”

To date, 113 cases have been detected of goods traffic sent by 29 illegal parcel delivery agencies from abroad. There have been four reports of smuggling associated with this phenomenon, and more than three tons of products of various types have been confiscated which had tried to enter the country through these networks, the General Customs of the Republic (AGR) reported Wednesday.

Colonel Wiliam Pérez González, deputy chief of the AGR, explained that these are agencies that do not have official contracts with Cuban companies authorized to carry out these operations, and that for this purpose they use the route of encomiendas (internationally prohibited) to passengers, who accept to bring the goods in exchange for payment or compensation.

He added that this action poses a high risk, since sometimes passengers, and often even the same recipient in Cuba, are unaware of the contents of the packages, and when transporting them they may be involved in cases of trafficking in drugs and other illegal materials.

This phenomenon generates the greatest acts of corruption within the AGR, in addition to showing features of organization and impunity, from the networks developed in the country for the commercialization of goods. For all these reasons, he said, the various illegal trafficking networks related to goods are being tackled with rigor and intelligence.

Perez Gonzalez explained that, despite repeated warnings, cases continue to be detected of passengers who, without knowing, carry prohibited items as part of their luggage, thereby incurring violations or crimes punishable under current legislation.

On this subject, in April of this year, a note published on the Customs website (www.aduana.gob.cu) referred to the fact that in the cases discovered, travellers “did not know the contents of the packages”, brought “in exchange for payment made by parcel delivery agencies” dedicated to this activity “without complying with the provisions established in Cuba”, or those of the country of origin.

It also explained that since these are articles sent to third parties by agencies, “their importation acquires a commercial character”, which is prohibited by Cuban customs regulations, and “subject to the administrative sanction of confiscation, if there is no more serious crime”.

At the same time, Customs advised travellers to “refrain from being part of the chain of illegal importation of goods” which unauthorised offices “promote with commercial and enrichment interest” in order to speed up their stay at the border.

Since October 2017, the list of customers with whom the UEB Agencia Aduanal and Transitaria Palco have a parcel and service contract for the shipment of non-commercial cargo of legal trade and origin, as well as the shipping companies with which they have a contractual relationship, has been published on the aforementioned website.

What do you need to know about Customs when you arrive in Cuba?

Native-born persons, in their capacity as passengers, are not authorised to carry parcels for other natural or legal persons.

As parcels are understood those goods, packages and packages sent from abroad to third parties using the passenger to transport them.

What risks can be taken with the parcels?

They can be used for the movement and masking of substances and articles used in terrorism, drug trafficking operations and smuggling of goods, which can endanger security, human health and the environment.

The passenger who is the carrier of an order assumes the administrative or criminal responsibility derived from the breach of this regulation.

For customs purposes, Shipments shall be understood to be all those received using the services provided by companies and entities expressly authorized for this purpose, either by post or courier, or by using air or sea freight, the latter by air waybill or bill of lading, as appropriate.

Shipments may not contain:

Articles of the same type which, irrespective of their quantity and value, are presumed to be of a commercial nature.

Items whose value, individually or as a whole, exceeds the shipping limit of 200 pesos.

Cash and securities of any kind.

Pornography or other articles that violate morals, good manners or internal order.

Household appliances that are not allowed to be imported.

Equipment requiring prior approval from the Control and Supervision Agency of the Ministry of Informatics and Communications:

Articles of animal or plant origin prohibited by sanitary, phytosanitary and veterinary authorities. 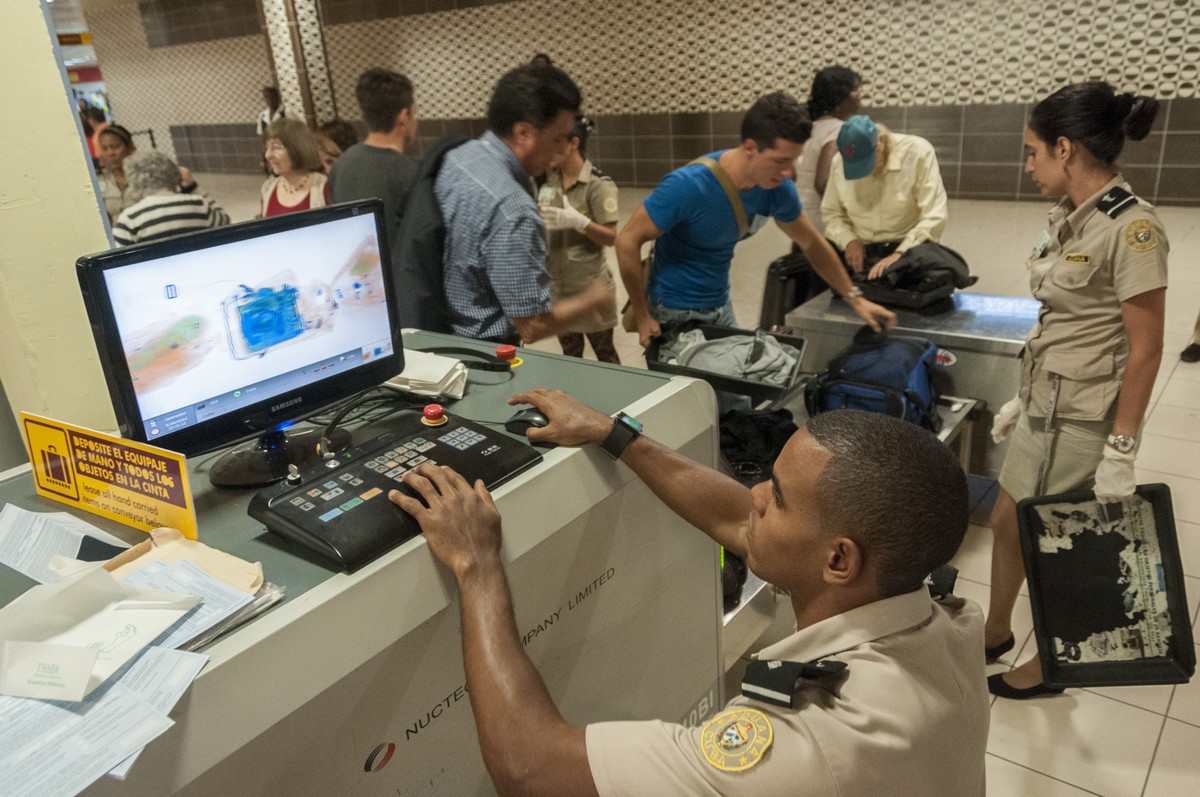 Continue to strengthen the system of customs confrontation and improve actions to minimize acts of corruption and crime under a preventive, prophylactic and conscious refusal approach.

Continue to make progress on the technological modernization project to enable the timely detection of acts that threaten national security.

To promote institutional communication actions aimed at the internal and external public.