Creative resistance born in the neighborhoods

Cuba’s creative resistance is born in the neighborhoods (+Video)

“With the experience, with the motivations we have, with the encouragement for what we have achieved this year, what we are looking for is an innovation in community work, and an innovation in social work.” The reflection, made by the First Secretary of the Central Committee of the Communist Party and President of the Republic, Miguel Díaz-Canel Bermúdez, on Tuesday, marks the course of what the country has proposed to achieve from the actions in the most vulnerable neighborhoods. 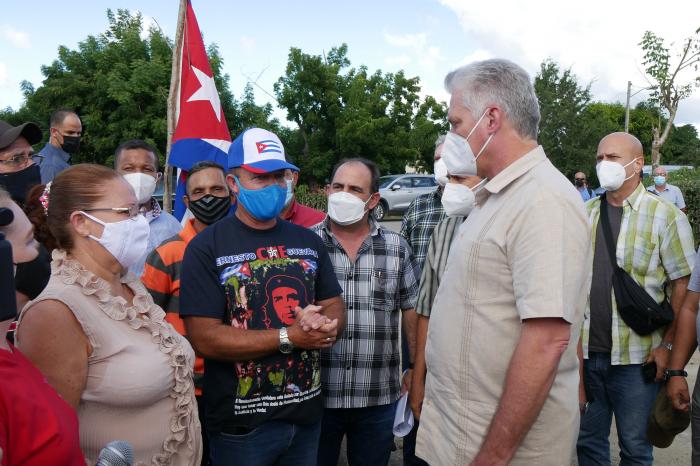 Díaz-Canel
The purpose has been to work together for the community. Photo: Estudios Revolución

“With the experience, with the motivations we have, with the encouragement for what we have achieved this year, what we are looking for is an innovation in community work, and an innovation in social work.” The reflection, made by the First Secretary of the Central Committee of the Communist Party and President of the Republic, Miguel Díaz-Canel Bermúdez, on Tuesday, marks the course of what the country has proposed to achieve through actions in the most vulnerable neighborhoods.

It is precisely the work in the neighborhoods where we find an expression of that concept of creative resistance that we have defended; because it is there in the neighborhoods where all the problems we have are manifested, emphasized the President at the meeting, which was also attended by members of the Political Bureau Salvador Valdés Mesa, Vice President of the Republic; and Roberto Morales Ojeda, Secretary of Organization and Politics of Cadres.

The pandemic manifested itself in the neighborhoods -commented the Head of State-, it is where the effects of the blockade and the measures of the US administration are suffered…. And there, our people have not only been able to resist, but when we summoned them and worked together, they have creatively solved a whole group of problems that in other times had remained unanswered, said the Head of State to representatives of several organizations and the highest leadership of the Party and the Government in the capital, together with whom he evaluated the most recent actions that have been carried out in the 67 Havana communities where they are currently working.

Since that participation, more than 9,500 constructive actions and almost 31,000 social actions have been carried out in the communities.

According to the information provided at the meeting by Havana Governor Reinaldo García Zapata, in these five months, the project has contributed to the improvement of the visual and architectural environment; to the rehabilitation of basic services, together with the installation of new services to the population; 101,128 tons of asphalt have been laid in the paving of 119 kilometers of roads and the construction of 72.1 kilometers of sidewalks; in addition, houses, citadels, buildings and stops have been rehabilitated and built. The more than 2,000 basic sanitation and Aguas de La Habana actions are among the actions that have had the greatest impact, he specified.

Progress has been made in the completion of community structures and factors; in the delivery of supply books; the legalization of housing; offers of job placement and continuity of studies; as well as attention to mothers with three or more children under 17 years of age.

Taking into account the way in which the work has been carried out in the different neighborhoods, García Zapata explained that out of the 67 in which they are working, 22 can conclude the year with the actions carried out in the municipalities of Arroyo Naranjo, Boyeros, Cerro, Cotorro, Guanabacoa, Habana Vieja, La Lisa, Playa, Regla and San Miguel.

At the same time, he proposed to the work team to include 40 new neighborhoods, and to maintain the ones started this year that have pending actions.

The national coordinator of the Committees for the Defense of the Revolution, Gerardo Hernández Nordelo, insisted on the priority that should be given to constant communication with the population, because many times the dissatisfactions are simply related to the lack of information that the inhabitants have about the actions being executed in their community.

And in that sense, he acknowledged, it is also vital the role that mass organizations can develop to explain about plans, work perspectives or lack of resources.

It is about working together for the community. This is the maxim that has prevailed in the neighborhoods and without which, considered the first secretary of the Provincial Committee of the Party, Luis Antonio Torres Iríbar, it would not have been possible to sustain all the actions that have been carried out in these months.

TAKING FULL ADVANTAGE OF THE POTENTIALITIES OF THE NEIGHBORHOODS

Creativity, participation, transformation have been key elements of all the efforts that have been made in the neighborhoods. And as part of the actions carried out there, the President of the Republic highlighted the way in which concepts such as popular power, developed by the Commander in Chief, have been defended; the improvement of democracy in our socialism with popular participation; the quality of everything that is done, because not in all places, he said, things have worked well or resources have been used as they should, as well as the sustainability of everything done, so that we always advance in the work in the neighborhoods and never go backwards.

Although we have been focused on making transformations, healing wounds that existed in the neighborhoods, recovering facilities and improving physical spaces, for 2022 we have the challenge of incorporating more subjectivity and more spirituality, the President reflected.

Knowing what the neighborhood has, what needs to be improved and what it lacks, is essential to be able to develop actions with greater precision in what is needed there, he added.

And if we treat all this from an emotional point of view, if we include a pedagogy and popular education that teaches those who lead how to work with the population and teach the population how to participate properly, we will undoubtedly be contributing to hope and to that transformation through participation, said Díaz-Canel.

Then, he reflected, the people will be seeing how from Socialism and how from the Revolution, with participation, they find meaning in their lives, because from Socialism, from the Revolution, with participation, they are transforming their lives, their individual lives, their family life, their social life, and therefore their community, which is where they carry out most of their activities.

In the search for this path, the Head of State considered it essential to carry out anthropological analysis and research of the neighborhoods, to know what their roots, motivations and aspirations are. He also emphasized that priority should be given to work with senior citizens and young people, two generations eager to contribute and do something.

He also drew attention to the contribution of making better use of the community projects that already exist and the experience of the leaders of these community projects, “who had already come a long way before we went to these actions”.

On the other hand, he commented on the orientation that should be given to the budgets of the municipalities so that they are more oriented towards social programs and attention to situations of vulnerability, and so that the municipality can better manage the financial resources, the budgetary resources to work on these issues.

The will we have and the purpose of strengthening local productive systems will be another strength that each municipality, each community will have to work on these issues, he pointed out.

If we treat all these things as a whole and take advantage of them -he stressed- we really have a very propitious scenario to achieve more transformations and create a better state of satisfaction in the inhabitants of all the communities of the country and that is what we have to work on.

11 months ago GranmaCovid-19, Diaz-Canel0
Sovereignty born of the countrysideContinuing on the road of joy, trust and hope