Home Belafonte, the friend, on his 95th birthday

Belafonte, the friend, on his 95th birthday

Belafonte, the friend, on his 95th birthday

When on July 23, 2020, Harry Belafonte held in his hands the Friendship Medal, awarded by the Cuban State, he surely edited in his memory, as in good movies, unforgettable sequences of the many moments of his life in which he shared luck, convictions and destiny with the inhabitants of the archipelago. 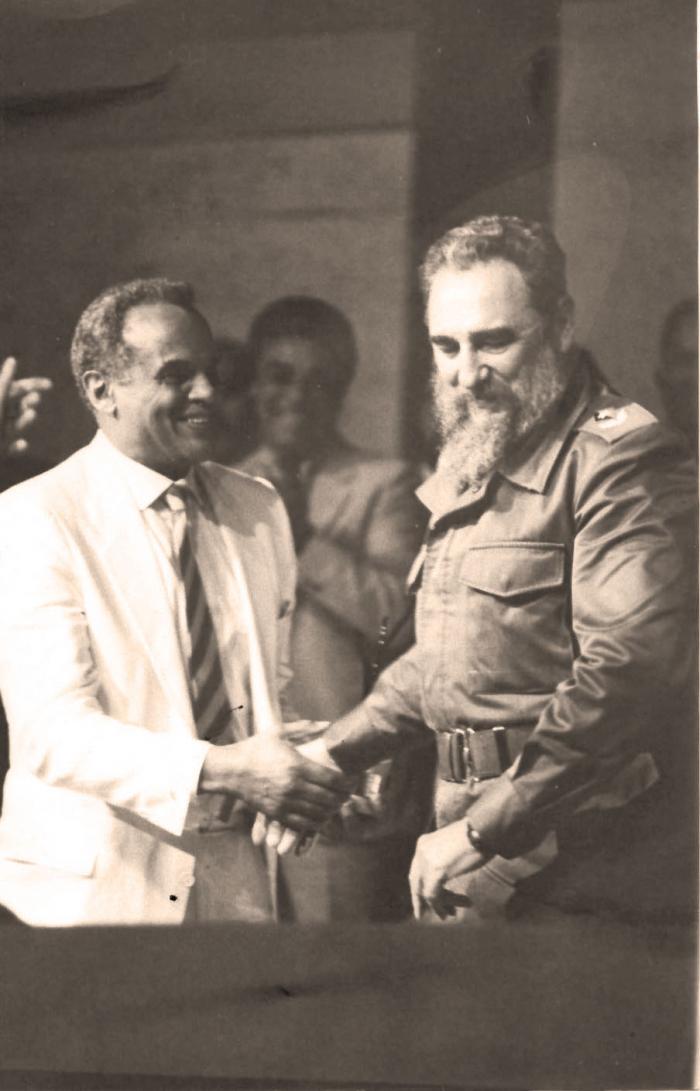 When on July 23, 2020, Harry Belafonte held in his hands the Friendship Medal, awarded by the Cuban State, he surely edited in his memory, as in good movies, unforgettable sequences of the many moments of his life in which he shared luck, convictions and destiny with the inhabitants of the archipelago.

On that day, the then-Havana ambassador in Washington, José R. Cabañas, said: “This distinction is a recognition of his trajectory of solidarity with Cuba and his respect and admiration for the Cuban revolutionary process”.

On the 95th birthday of the American actor, musician and social activist – who was born on March 1, 1927, in New York – Belafonte continues to be a source of inspiration for many of his compatriots and for those of us who value the exceptional artist, the extraordinary human being and the dear friend.

One name cannot be missing in the consolidation of such a special bond: Fidel Castro. The historical leader of the Revolution and the actor and singer, Martin Luther King Jr.’s companion in the struggle, cultivated a very close relationship, since Belafonte met Cuba again in 1979, so as not to lose the route to Havana in the future, as long as his health allowed him to do so.

Harry got to know the city in the 19’50s, not without first crossing words and experiences with many Cubans living in New York, and feeling an affinity towards the music of the neighboring country, especially after listening to Chano Pozo with Dizzy Gillespie’s band.

In those same years, more than because of his films, the song Matilda penetrated the musical imagination of the Cubans of the time, a song that dates back at least to the 1930s, when the pioneer of calypso, the Trinidadian King Radio (really called Norman Span) released the song. Belafonte first recorded it in 1953 and it became an immediate hit, reinforced by its inclusion on his second full-length album with RCA Victor in 1955.

In his memoirs, My Song, published in 2011, still unpublished in Cuba in its Spanish version, he recounted: “When I became an artist and began to have some celebrity I went to Cuba quite regularly, before 1959. I went there with Sammy Davis Jr. and to listen to Nat King Cole, and to hang out with Frank Sinatra; the place where we hung out the most was the Hotel Nacional. Everybody was performing there except me. When they came to me – and I had a work contract, when the Habana Riviera Hotel first opened – I was in an interracial marriage as it was called in those days and suddenly I became persona non grata, in Cuba, everywhere.”

Right around that time he performed in Robert Rossen’s film, Island in the Sun, in which he played a black union leader from a fictitious West Indian territory who lived a love story with a young white woman from the upper-middle class (Joan Fontaine). The film generated controversy when it was released in the United States in mid-1957, because of what the racist elites considered its irresponsible transgression. After the triumph of January 1959, Fidel, who in addition to being an insatiable reader was a cinephile to the extent that his political and governmental responsibilities allowed, saw the film and talked about it to Belafonte, in front of his wife Julie and friend and colleague Sydney Poitier. For both Fidel and Harry, racism and discrimination based on skin color were inadmissible and abhorrent social and cultural manifestations.

In this regard, he observed in his memoirs: “Many Cuban exiles say that in Cuba there was no racism before the Revolution, that Cuba was never racist, never like the United States. I think that Cuba, among all the Caribbean islands, all with racist practices, was the most racist (…). So, when I went to Cuba after the Revolution, the first thing I noticed was the mixture of people, particularly among young people, there were still residues of the old customs, but certainly among the young people, when I went to the University, and when I went to the places of culture, when I went to the daycare centers, wherever I went in Cuba among the young people, I was deeply impacted by the fullness of racial integration. (…) I am not suggesting that in Cuba there is not some racism, but it is important to know that it is not an official state practice, nor is it institutionalized.”

It was precisely the objective and subjective factors that favored the reproduction of racist and discriminatory attitudes in Cuban life and the struggle for their eradication as an inalienable part of the Cuban revolutionary project, which occupied the dialogue between Fidel and Belafonte more than once. The American friend has received news of the implementation in the last two years of the National Program against Racism and Racial Discrimination, a work platform of obvious Fidelista inspiration.

One invaluable contribution of Harry Belafonte to the dismantling of prejudices had to do with the vindication of hip-hop culture, and particularly rap, in the Cuban scene. On one of his trips at the end of the last century, he met black rappers who told him how they found it difficult to get recognition from cultural institutions, so they offered their art in the underground scene.

Years later, interviewed by the American activist Sandra Levinson, he confessed: “I tell you something that impressed me a lot: I lived the hip-hop culture of Cuban rappers. (…) I was surprised by how many there were and how uninformed the hierarchy in Cuban cultural circles was of the whole hip-hop music culture. After meeting hip-hop artists in Havana, I met with Abel Prieto at a luncheon hosted by Fidel Castro, and we got to talking about hip-hop culture. When I returned to Havana a couple of years later, people from the hip-hop community came to see me and we hung out. They thanked me effusively and I said, why, and they responded, because your conversation with Fidel and the Minister of Culture about hip-hop led to there being a special agency within the Ministry. (…) What I think is important is how open the leadership was to this phenomenon called hip-hop, while in the United States we do a lot to demonize the culture, and we don’t even have a Ministry of Culture.”

As a testament to his unwavering solidarity and sense of justice, it is worth recalling the words with which he introduced the rally held at the Church of Reconciliation in New York on September 27, 2003. On that day he prayed for the Five Cuban anti-terrorist heroes undergoing long sentences in the United States. He also stated: “What is happening with our policy against Cuba is not the American way, it is not the true voice of the American people, it is not the true voice of those of us who believe deeply, profoundly, in the rights of all peoples, and the freedom of all people and in democracy. (…) There is a lot about the Cuban government, the Cuban people and what they have achieved, that many of us here are still trying to achieve.”

Fidel is Fidel, as Estela Bravo reflected: “Fidel is Fidel. Unique for his time, his presence in the world improved the lives of millions of people”.

Island in the Sun (complete)