Translated and edited by
Walter Lippmann for CubaNews. 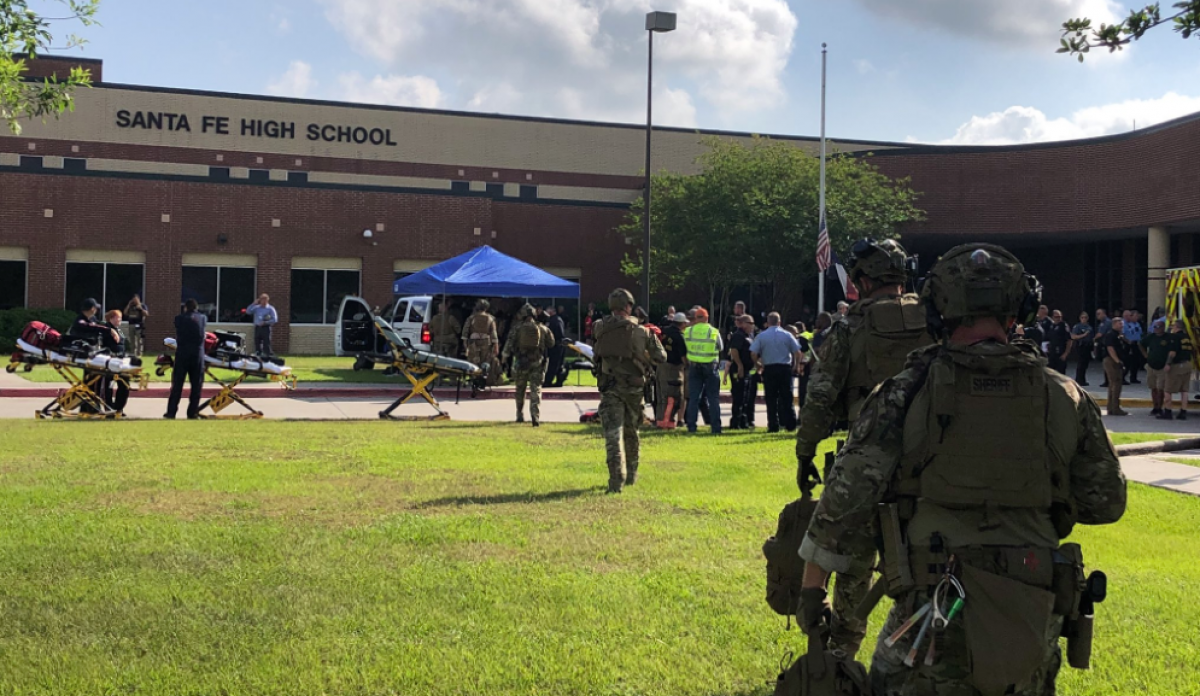 This Friday, at least ten homes in Texas did not see their children return from school. A shootout at Santa Fe High School at 7:40 in the morning resulted in the tragic death of 10 students and one teacher, and an as yet undetermined number of wounded among its 1 400 students.

A witness told KTRK-TV in Houston, that a man pulled the fire alarm and when the students left their classrooms they were shot to death. There is one person in county custody and a second “person of interest” was also arrested, Houston County Sheriff Ed Gonzalez confirmed. Authorities also said that explosive devices were later found in and near the school.

Fear once again grips American schools and that society when, on average, there has been a weekly gunfight so far this year on a school stage.

A student who identified herself as Paige to the Houston television station, in addition to saying, “I was very, very scared,” said she was not surprised by the facts: “It’s been happening everywhere. I always felt it would finally happen here, too.

That is a terrible reality, confirmed by the facts. CNN reported that this is the third shooting in Santa Fe in the last eight days and 22 in the past 20 weeks of 2018. On Wednesday, at Dixon High School in Illinois, a former Dixon High School student opened fire near where graduation was taking place; and on May 11, a 14-year-old boy in Palmdale, California, began firing a semiautomatic rifle shortly before school began at Highland High and injured a person.

“We mourn the terrible loss of life and send our support to all those affected by this absolutely horrible attack,” said Donald Trump, who was at the annual meeting of the National Rifle Association in Dallas, Texas, on May 4, and gave the NRA the first speech by an American president since 1983 – following the example of Ronald Reagan, a cowboy of arms from Hollywood movies, who also became president.

The president, who received a contribution of $31 million from the powerful arms lobby for his election campaign, told them, “You supported me, and I’m going to support you now,” they have a “true friend in the White House,” and added, “I can proudly say to the NRA that I will never again disappoint it,” while describing them as “the true American patriots of the NRA who defend our rights, our freedom, and our great American flag.

The empire’s administrator defended the personal carrying of arms, insisted on his proposal to arm “highly trained teachers” to prevent further shootings in schools, and emphasized: “The Second Amendment will never be under siege while I am president.

A press report on that NRA meeting stated: “Paradoxically, weapons were banned from the convention site, under orders from the Secret Service, the elite police force charged with protecting the high authorities in the United States.

Now, another boy, identified as Dimitrios Pagourtzis, a 17-year-old student who is said to have been bullied by his classmates, is the assailant, and the media report that screenshots of his social networking accounts show pictures of weapons, photos with Nazi symbols and a t-shirt with the slogan “Born to Kill”, which – according to several students at the local CW39 television station in Houston – he was wearing at the time of the incident. The weapons used were his father’s and perfectly legal….

Nothing will stop this tragic nonsense as long as the interests of the arms industry prevail and the United States is an armed society, licensed to kill in its own backyard, formed by the absurd example that comes to it from a State that organizes, foments and executes wars against other peoples anywhere in the world, because it considers itself the police and executioner-avenger of the planet.