Cuba Will Make an Exhaustive Follow-Up

The speed and efficiency of the competent authorities and the discipline and solidarity of the population following the 12:08 p.m. plane crash in Havana on Friday – when a Boeing 737-200 leased by Cubana de Aviación was dropped to the ground at the time of takeoff – were highlighted from the scene by Miguel Díaz-Canel Bermúdez, President of the Council of State and Ministers.

The First Secretary of the Central Committee of the PCC, Army General Raúl Castro Ruz, who is recovering satisfactorily from a recent surgical operation, scheduled in advance to suppress a hernia, is keeping abreast of the situation and has given the relevant indications. He also asked to convey his condolences to the families of the victims of the catastrophic accident.

Diaz-Canel offered, on behalf of the Government and the Party, his condolences to the families of the victims. “All the measures planned for this type of event have been taken, the facts are being investigated and all the information will be given. No centres or homes were damaged,” he said.

In the afternoon, a government meeting was held, chaired by Díaz-Canel and Salvador Valdés Mesa, first vice-president of the Councils of State and Ministers, during which, together with the ministries and bodies involved, the event was characterised and evaluated.

After that meeting, the highest authorities of the Ministry of Transport (Mitrans) informed the press that on the national flight DMJ 0972, which was traveling from Havana to Holguín, 104 passengers and one infant were traveling, of which five were foreign citizens and the rest were Cubans. The six crew members were also foreigners.

Eduardo Rodríguez Dávila, first vice-minister of the Mitrans, reported that three people were rescued alive and are being cared for, but their condition is very serious; they have not yet been identified. In addition, he said that the plane fell to the ground in an uninhabited area between the José Martí airport and Santiago de Las Vegas.

A commission of inquiry, chaired by the Institute of Civil Aeronautics, has been set up to carry out an exhaustive investigation; with the collaboration of the Ministry of the Interior, the site has been preserved. The process of clarification will be complex, he said, and has been negatively marked by heavy rains. However, all the assurances are available to follow it up.

The Ministry of Public Health also created the conditions to care for the families at such a difficult time, with the help of psychologists and other professionals with experience in post-traumatic scenarios, and the Ministry of Tourism will guarantee them accommodation in the capital.

The provincial governments have been responsible for informing them of the news and ensuring its transfer to help identify the remains, which is expected to be difficult. At the end of the personalised notification, the flight manifest shall be made public.

Adel Yzquierdo Rodríguez, head of Transport, referred to the solidarity of the people of Boyeros, who arrived on the scene moments after the impact. “One survivor complained, and people hurried to remove the obstacles to reach him,” he said. 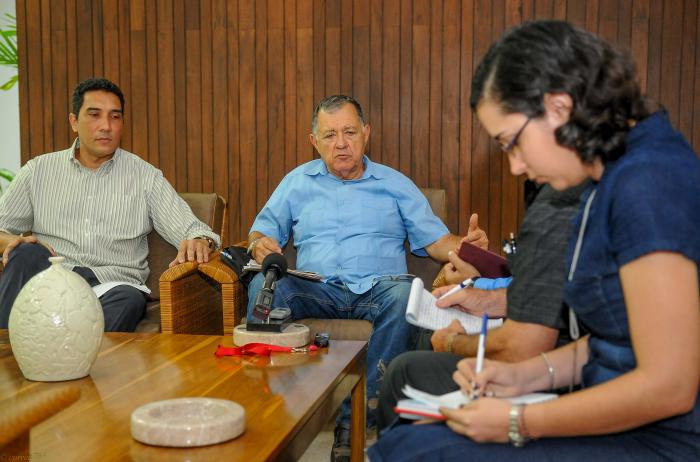 He also praised the professionalism of the Airport Fire Command and the other Rescue and Rescue personnel, who acted quickly and sensitively, and explained that the protocol for situations of this type worked as planned. He also stated that the management of the Mitrans was very close to him at a routine meeting, and arrived at the site immediately, as were several ministers and leaders in Havana.

“At the time of the accident, the post was activated for emergency situations and the tracks were closed for review. Minutes later, after seeing that there were no problems in them, the authorization was given to resume operations and the airport regained its vitality,” said the Minister of Transport.

Systematic information will be provided to the press and the public, and the highest party and government authorities will check the course of the investigations.

The Party, the Government, the Mitrans and the Civil Aeronautics accompany the pain of the loved ones of the victims, ratified Yzquierdo and Rodríguez Dávila.

4 years ago Granma29
Addicted to ViolenceVenezuela: A Liberating Vote