Home A Frenchman Who Saw the Sun Again

A Frenchman Who Saw the Sun Again 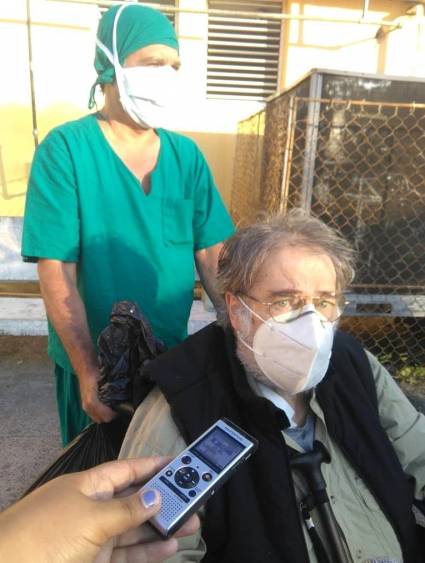 Jack Gaetan Joseph Villiers is a Frenchman who is miraculously alive. It’s as simple as that. But the miracle has also come about because of the proven professionalism of Cuban health.

“This is the first time I’ve seen the blue of the sky after almost 20 days of admission,” he said in a choppy voice from the wheelchair in which he was being transferred to the ambulance that would take him to Havana.

This man with a graying beard conveys with his clear eyes the immense gratitude that no resources, no tiredness, no sleep were spared to save him.

“But I feel good already. When all this is over, we will return to Cuba,” he whispered in his deficient Spanish as he said goodbye to the bus at the Mario Muñoz Monroy Hospital’s isolation center, becoming the sixth confirmed positive patient of the COVID-19 to be discharged in this city.

“Now I can confirm what my brother, who is a doctor, said about the capacity of Cuban doctors, who have specialized in fighting pandemics and diseases like these,” the Frenchman stressed to the Matanzas television and radio media.

Dr. Juan Carlos Martin Tirado, director of the hospital, confirms that this is another achievement of Cuban medicine, because this patient had many of the expected complications at his 72 years of age, including heart disease, hypertension and a major underlying diabetes mellitus.

Martín Tirado praised the delivery of the multidisciplinary team of intensive care, which worked day and night to save the patient.