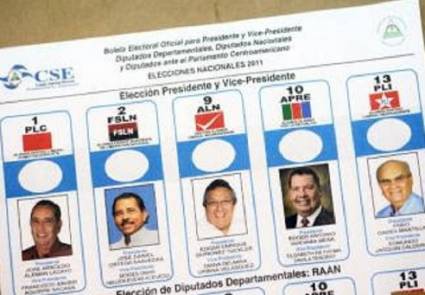 The Sandinista authorities have called for general elections today, but the U.S. and its allies will not want to recognize them.

The Sandinista authorities have called for general elections today, but the US and its allies will not want to recognize them. Author: CSE published: 06/11/2021 | 09:33 pm

New sanctions against Nicaragua approved this week in the U.S. Congress, draw the real scenario in which today’s presidential elections take place: a scenario of harassment and undeclared war, which would seek to use the elections as a springboard for full interference.

The Renacer (Reinforcing Compliance with Conditions for Electoral Reform in Nicaragua) Act has just been approved by the House of Representatives and has already passed through the Senate, so it only awaits the approval of President Joe Biden.

Its harmful nature seeks to involve the European Union, Canada and Latin American and Caribbean neighbors in further cutting off  loans from international financial institutions to Nicaragua, review its participation in the free trade pact between the United States, Central America and the Dominican Republic (Cafta-DR), and selective sanctions against Nicaraguan officials considered by the North to be “violators” of human rights, among other measures.

Its rapid passage through the lower house a few days before the presidential elections, confirms the presence on the proscenium of an invisible “candidate” whose determination is to overthrow a model that has given citizens more satisfaction than pain since the triumph of the Sandinista Revolution in 1979, which meant the end of the murderous dictatorship of Anastasio Somoza.

A decade later, that same phantom actor was the real protagonist of the defeat of Sandinismo at the polls on February 25, 1990, by promoting and financing an alternative personified as a solution to the naval blockade and the “contra” war -that is how the counterrevolutionary gangs were known-, which that same hegemonic intruder promoted and armed.

In search of peace, the votes then lost by the FSLN went to the so-called National Opposition Union represented by Violeta Barrios de Chamorro: the White House had made it clear that the presence of Sandinismo in power would mean more aggression.

There followed 16 years of corrupt and complicit executives allied with US decisions, which led to the extinction of all the measures implemented by the FSLN to alleviate the social backwardness enthroned by Somocismo, and the minimal but important steps taken in the economic field.

These anxieties, and a policy of alliances that untangled traditional entanglements with key sectors of society, such as the upper hierarchy of the Catholic Church and private enterprise, made possible the return of the FSLN to power in 2007.

It was necessary to launch another literacy campaign because a new generation had grown up without the facilities to learn to read and write, restore access to public health, and reimplement measures to support the peasantry, where the majority of the social base is located.

Stability and results in the economic sphere through a mixed economy system, accompanied by a policy of regional cooperation in a Latin America where similar models of solidarity and social justice had emerged, characterized the work of an FSLN that changed its image from red and black to fuchsia, but has kept the essence of its ideals unchanged.

By April 2016, the IMF, the watchdog of international financial policies, and propitiator of onerous indebtedness, would ratify the recognition it had made to Nicaragua seven years earlier: “The Nicaraguan economy continues to register high growth rates and sustainable macroeconomic policies. In 2015, the Gross Domestic Product (GDP) grew 4.9 percent and the average of the last five years (5.2 percent) is one of the highest in the region.”

But the bonanza would last until the next boom. By 2017, together with the third consecutive reelection of Sandinista leader Daniel Ortega and in the run-up to the November municipal elections that year, the U.S. Congress was already preparing the Nica Act, the first in a series of sanctions that would follow.

Finally approved in 2018, the law officially named the Nicaraguan Investment Conditionality Act sought to block loans from international financial institutions to Managua, among other punitive measures, unless it took “effective measures to hold free, fair and transparent elections,” argued its promoters of the Cuban-born Floridian ultra-right, as deceptively as it is done against Venezuela or against Nicaragua itself, again, right now.

Daniel Ortega’s response was consistent with the circumstances. It was, he denounced, “the continuity of historical policies of US imperial interference in Nicaragua”, which is what we see today.

History that is present
That, however, was not the only flank of aggression. In April 2018 itself, the unusual and massive demonstrations with which hundreds of Nicaraguans took to the streets after the triggering of a social security reform that had immediately been repealed, constituted the implementation in Nicaragua of a chapter of unconventional warfare that had already been tested in Eastern Europe and in some countries of the Middle East: “color revolutions” that are really very dark, and plunged Nicaragua into months of instability with its share of arrested, dead and wounded.

Money sent from the U.S. to foment opposition and subversion had been flowing through subway channels for some time, as in the late 1980s.

According to investigations cited by the site Misión Verdad, only to support a communication network that would sustain the media strategy against Sandinismo, some ten million dollars have been channeled through the US Agency for International Development (USAID) since 2009. Seven million of that total went to the so-called Violeta Barrios de Chamorro Foundation for Reconciliation and Democracy between 2014 and 2021.

The article calls the Foundation “a central vehicle for Washington’s massive financial, technical and logistical support to the Nicaraguan opposition, acting as what the CIA calls a “staging post”: a third-party organization that serves as an ostensibly independent channel for giving U.S. government funding to foreign political groups and media outlets.”

In total, it is estimated that since the Sandinista return to power, Washington has channeled tens of millions of dollars to the same cause.

However, the country is now accused of being a flawed democracy that disrespects human rights, a term that has been politicized and manipulated for decades. It is the same justification used to demonize and attack models of change in the face of the status quo of unbridled capitalism, which the right-wing powers would like to maintain globally.

Such background is essential to understand what is happening this Sunday around an electoral race for president and deputies which is questioned by the absence of right-wing candidates accused of corrupt management and of facilitating US interventionism; among them, two bear the last name of Chamorro.

In spite of the fact that some headlines are propagating that “there are no candidates” -a false assertion which could have penetrated part of the electorate since some of the polls, which were already wrong in Nicaragua in 1990, announce high abstention- five opposition candidates are competing against the FSLN and Daniel Ortega. Some of them are nominated by long-standing and experienced groups such as the Constitutionalist Liberal Party and the Independent Liberal Party.

The registry, the tables and ballots have been ready for some time now, and some 200 international observers will act as observers to attest to the transparency.

Everything seems to be in order. But that is not what the United States would like.