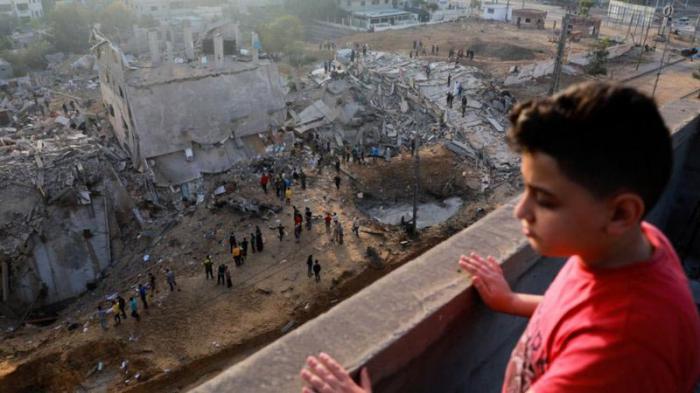 The First Secretary of the Central Committee of the Communist Party of Cuba and President of the Republic, Miguel Díaz-Canel Bermúdez, condemned “the flagrant violations of the human rights of the Palestinian people” and demanded the immediate cessation of Israeli attacks on the Gaza Strip.

Israel’s indiscriminate shelling of the Palestinian population in Gaza has so far resulted in the deaths of 31 children. Photo: Getty Images

The First Secretary of the Central Committee of the Communist Party of Cuba and President of the Republic, Miguel Díaz-Canel Bermúdez, condemned “the flagrant violations of the human rights of the Palestinian people” and demanded the immediate cessation of Israeli aggression against the Gaza Strip.

“The Zionist barbarism and the mantle of impunity that the U.S. spreads over those crimes with its support to the Israeli regime insult the world,” the Cuban leader said on his Twitter account.

In this regard, the island’s Foreign Minister, Bruno Rodríguez Parrilla, on the same social network, also demanded an end to the Israeli massacre. “The UN Security Council should act and prevent it,” he stressed.

Likewise, the International Relations Commission of the National Assembly of People’s Power (ANPP) of our country issued a statement in which it strongly condemns Israel’s indiscriminate bombings against the Palestinian population in Gaza, which have caused, so far, the death of at least 122 people, including 31 children, in addition to hundreds of wounded and extensive material damage.

The text demands, once again, the immediate cessation of the acts of violence of the Israeli army against the defenseless Palestinian people and the expansionist and colonizing policies of the State of Israel. It also denounces the continued support of the U.S. government for the crimes committed by Israeli forces.

The ANPP called on the international community to act urgently and decisively to force the State of Israel to put an end to its crimes. The Cuban parliament emphasized the urgent need to reach a comprehensive, just and lasting solution to the Israeli-Palestinian conflict.

The Bolivarian Alliance for the Peoples of Our America-People’s Trade Treaty also regretted and condemned the attacks by the Zionist regime.

The Palestinian catastrophe of 1948

The Palestinian catastrophe of 1948

Every May 15 is commemorated the Day of the Nakba, or catastrophe, in Palestine, the date on which around 800,000 Palestinian civilians were expelled after the occupation of their lands and homes in 1948. Only one day had passed since the proclamation of the State of Israel in the Palestinian territory and it was already showing its expansionist and usurping nature.

Every May 15 is commemorated the Day of the Nakba, or catastrophe, in Palestine, the date on which around 800,000 Palestinian civilians were expelled after the occupation of their lands and homes in 1948. Only one day had passed since the proclamation of the State of Israel in the Palestinian territory and it was already showing its expansionist and usurping nature.

The partition of Palestine, approved by the UN in November 1947, precipitated the events that had been unfolding for some time. Long before, Theodor Herzl had outlined the foundations of Zionism and the future Jewish state. The British Foreign Secretary, Arthur James Balfour, had expressed to Baron Rothschild his government’s support for the establishment of a “national home for the Jewish people” in the region of Palestine; and the Zionists who had gradually settled in Palestine, supported by the international Jewish oligarchy, had taken advantage of Britain’s “neglect” as the mandated power in the region to organize themselves politically and militarily.

Once the cessation of the British mandate over Palestine was announced, coexistence between the Arab and Jewish communities became very tense and confrontations began in the face of the advance of the Zionist project and the refusal of the Palestinians to cede their territories. At this point, what historians call “programmed ethnic cleansing” was implemented, a deliberate policy aimed at displacing the Palestinian Arabs in order to insert the Jewish immigrants who were beginning to arrive en masse.

Yosef Weitz, director of the Land and Forestry Department of the Jewish National Fund and architect of the acquisition of land for the Jewish community in Palestine, gave ideological foundation to the expulsion policy: “It must be clear to us that there is no place for the two peoples in this country (…). We will not achieve our goal of being an independent people as long as there are Arabs in this small country. The only solution is a Palestine, at least Western Palestine (west of the Jordan River) without Arabs (…). The only way to achieve this is to move the Arabs from here to neighboring countries, to move them all; there must not be a village or a tribe left. Only in this way will the country be able to absorb millions of our own brothers. There is no other solution (…)”.

One of the most notorious acts of Zionist gang violence was the massacre perpetrated in Deir Yassin, where 254 Palestinian Arabs were brutally murdered. A former Israeli military governor of Jerusalem described it as follows: “(…) units of the Etzel and Stern gangs jointly organized, without provocation, a deliberate attack on the Arab village of Deir Yassin on the western edge of Jerusalem. There was no reason to justify the attack. It was a quiet village, which had denied entry to volunteer Arab units from across the border and had not been involved in any attacks on Jewish areas. The dissident groups chose it for strictly political reasons. It was a deliberate act of terrorism (…)”.

According to the final report of the United Nations Economic Survey Mission for the Middle East in 1949, the number of Palestinian refugees resulting from the violence and war following the proclamation of Israel as a state, amounted to 726,000, which constituted half of the indigenous population of that region. Since then, the West Bank alone, including East Jerusalem, Gaza, Syria, Jordan and Lebanon, has counted more than 5.7 million Palestinian refugees, who now face the impact of the pandemic as one of the most vulnerable populations.

After 73 years of constant threats, attacks and the Zionist attempt to deprive the Palestinians of their rights, the principles of the Palestinian cause remain unchanged, as does Cuba’s support for the return of the refugees and the two-state solution, which involves the realization of the right of the Arab people to self-determination and access to a free, independent and sovereign state, with its capital in East Jerusalem, and framed within the borders prior to the Israeli occupation of 1967.

Let this Nakba Day therefore serve to vindicate the right of the Palestinian refugee population to return to their country and their homes, and to demand the cessation of the Zionist regime’s attacks on Gaza, where civilians, distributed at a rate of 4,167 inhabitants per square kilometer, are the ones who suffer the most in each attack.