Home Women in the Revolution

Women in the Revolution

Women in the Revolution

By: Graziella Pogolotti
Cuban art critic, essayist and intellectual. National Literature Prize (2005). President of the Advisory Council of the Minister of Culture, Vice President of the Union of Writers and Artists of Cuba, member of the Cuban Academy of Language and President of the Alejo Carpentier Foundation. 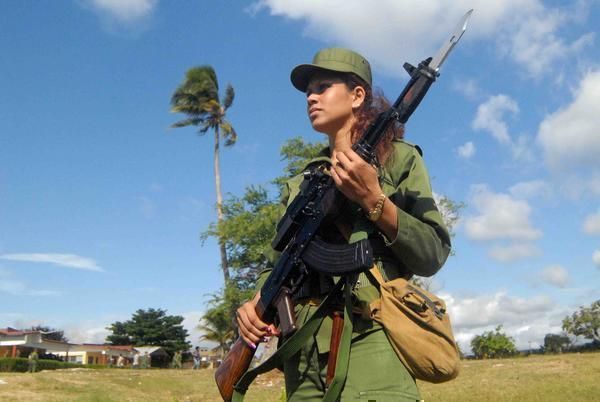 Women have ceased to be a simple object of desire, used as an instrument of the businesses that move around the beauty competitions. Photo: Miguel Rubiera.

Panchita’s face kept the indelible mark of the misery accumulated throughout a lifetime. She worked in the bookstore of L and 27 that I frequented weekly in search of the latest. Efficient, helpful without servility. In spite of the current of sympathy between us, we exchanged few words. One afternoon, however, I told her that I had spoken about her with a friend. Was it Charito? he asked with a broad, complicit smile.

That’s how it was. In fact, Charito Guillaume devoted her entire life to the needle-trades workers union struggle. This included, among others, branches of big Havana businesses, against prevailing racial discrimination in the sector, for salary improvements and in defense of the “right to the chair,” that is, the possibility of sitting when there were no clients in the area. According to her, a grassroots militant, Panchita had faced her son’s upbringing in solitude. Hers was not, however, an isolated case.

Cuban women can proudly tell a story that makes us precursors in more than one field.

In these times of open discussion about our Draft Constitution, it is right to evoke the profile of Ana Betancourt, an early defender of our rights in the Guáimaro Assembly. Many shared the harsh conditions of the Mambi camps. Mariana Grajales was prepared to offer her children to the struggle for the conquest of an independent nation, liberated from the infamous slavery and its racist aftermath. On the verge of waging the necessary war, José Martí noted the gesture of Manana, Máximo Gómez’s wife, with emotion. In offering him some help in the face of imminent helplessness, the wife of the great strategist stated that she would ask nothing from the revolution.

Throughout the neocolonial Republic, Cuban women continued to fight for their rights, inseparable from the fundamental battle in favor of the Revolution. Recently, Granma took up again the famous chronicle in which Pablo de la Torriente Brau evoked the death agony of Rafael Trejo, still smiling. “This boy cannot be saved,” commented the doctors as they struggled to defend that young, promising life that had become the most valuable symbol of the revolutionary student body.

When the inevitable outcome occurred, the women disputed the honor of shouldering the heavy coffin. In the fight against Machado, they challenged the police in the street demonstrations. When I try to rescue in my imagination that scenario full of violence, I like to remember that, among so many others, there was our “charming damsel”, the refined Esther Borja, then an education student and future interpreter of Ernesto Lecuona. When the dictatorship fell, we obtained the right to vote.

Faced with Batista’s coup, in addition to prominent fighters such as Haydée, Melba, Celia and Vilma, thousands of women mobilized in resistance to the dictatorship. Many of them fulfilled their mission and divoted themselves to diverse tasks in favor of the transformation of society. There is much to investigate and write about this beautiful story. Because, in spite of what has been conquered, much remains to be done.

Vilma’s leadership of the FMC took into account Cuban reality, and the legacy it had received. She looked at the problems of the future, objective and subjective – and therefore cultural. These had to be overcome immediately, as well as in the long term, in the light of the evolution of society as a whole.

It was urgent to overcome accumulated backwardness, especially for farmworker women. It was necessary to encourage access to work, to promote professional development in all branches of knowledge, to protect motherhood and the upbringing of women workers’ children. With patience and wisdom, it was indispensable to file the deleterious legacy of machismo, often unconsciously assumed as a natural fact by the women themselves.

The Family Code, sex education and the legalization of abortion placed us at the forefront of international debate in this field. Owners of their own destiny, women ceased to be simple objects of desire, used as an instrument of the businesses that promote beauty contests.

Recently, a Cuban television colleague suggested that, on the occasion of the carnivals, the idea of choosing the star should be taken up again. He argued that this is an internationally-established custom. We must be open to the world for all the useful learning it can offer. However, we cannot adopt customs that imply a regression from the conquests reached. This is all the more so in complex circumstances that introduce shadows of bad memories into our society.

In more than one sense, there are expressions that reflect the resurgence of machismo. On the other hand, in something strictly cultural, the changes introduced years ago in the carnival celebrations truncated a deeply-rooted popular tradition. Few people know that the one in Havana was the oldest in our country. The comparsas, as in Rio de Janeiro, emerged from the soul of the neighborhood. They took a long time to prepare, choosing the design of the steps, the wardrobe, and to develop the exceptional skill of the bearer of the lantern. I still remember when, at the side of La Punta, the drummers were warming up.

The comparsa was the result of a collective creation. In it the sense of belonging was settled. It was the manifestation of a living folklore. Because of its popular essence, it emerged from the bottom up to be delivered to thousands of spectators.

The massive use of women as sexual objects, a commercial phenomenon widely promoted by the media, has had disastrous consequences in all countries. To the hypertrophy of the quinceañera celebration, in some places have been added the so-called mini-quinces. These deform the developmental process of the child’s personality which have given rise to tragic phenomena of pedophilia. In some countries, this has gone to the point of demanding application of penal measures against the media which contribute to the diffusion of the phenomenon.

Let us not fall into easy temptations. Let us observe the world around us and carry out the indispensable critical exercise stripped of complacency, about what is proper and lucid as to what is essential among the inalienable values that we must defend.