Home What Trump Leaves and What Awaits Biden

What Trump Leaves and What Awaits Biden

What Trump leaves and what awaits Biden

The times are not good, and any political, social or economic agenda of a beginning President must be subject to the dictates of confronting the COVID-19 pandemic plus the vicissitudes of a very complicated Trumpian legacy 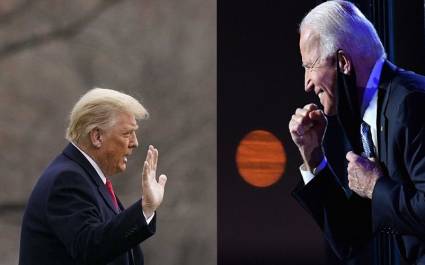 The victory to Joe Biden despite not being charismatic, and then made him categorically assert in an opinion article in The New York Times at the beginning of last August that “The keys predict that Trump will lose the White House Author: Victor Manuel Published: 02/01/2021 | 05:47 pm

Allan Lichtman, professor of history at American University, was also not wrong in predicting the winner of the 2020 presidential election. His record of accurate predictions, which dates back to 1984, remained intact.

The clues worked, which he explained in an interview with The Morning Show on Wisconsin Public Radio, why they were giving Joe Biden the victory even though he was not charismatic, and which then made him state categorically in an opinion piece in The New York Times in early August that “The clues predict that Trump will lose the White House:

The terrible numbers of the coronavirus pandemic, the national movement of protest against police brutality and systematic racism, the social unrest and economic collapse that erased the economic gains Donald Trump was presenting until the
Covid-19 appeared on the scene.

To tell the truth, Trumpism and its mishandling of the unexpected situation of this fateful 2020 and its aftermath, defeated the tycoon who administered the United States for four years as if it were an enormous capitalist monopoly, and not the imperial representative of big business that must follow the rules of the game because it is a showcase of democracy.

Without a doubt, the pandemic is rising as the giant to be faced by the elected president, although he already has the weaponry of the vaccine. A population of more than 300 million inhabitants is not immunized -what remains to be seen effectively- in a flash, therefore the numbers of those infected and killed and their consequent involvement in the country’s economy will continue to grow.

Without a doubt, the first months of Joe Biden’s administration will be torturous, and he does not have a Congress in which the Democrats, while retaining a majority in the House, will have to fight tooth and nail in the Senate.

Now, the legacy that Donald Trump leaves behind is much more notorious and damaging, because he led the United States into a state of extreme polarization and manipulated a good part of the American people in such a way that his faithful followers and the 74 million Americans who voted for him have accepted impunity and the existence of the swamp of corruption at the highest levels of the nation and of the power elites, even though one of his campaign promises was to end the “Democratic” swamp.

The pardons of these final days of his presidency speak for the clarity of that quagmire, when a good part of the pardons and annulments of sentences are for people very close to their political or family environment, faithful to their actions, millionaires who have committed tax fraud and other economic crimes.

An “achievement” of Trump, completed this one in the year 2020 will probably give a substantial turn to the legality towards the right. He appointed three Supreme Court justices – a lifetime appointment – and 25 percent of the federal judiciary. In doing so, he has reversed or broken the balance of federal appellate courts and, in the case of the highest court, could result in an alteration of the government’s regulatory power, the right to abortion, and the immigration law, to name three that are under debate and in the face of which the positions of the outgoing president, who will be sworn in on January 20 as the nation’s 46th president, are diametrically opposed.

According to judicial experts, and Democrats in particular, this is a takeover by the more conservative wing of the Republicans.

How will Biden deal with the very serious problem of institutionalized racism and its most public and violent expression, police brutality? Not a few analysts believe that the extreme white right promoted by Trump will persist in asserting its “right” to supremacy.

While Trump could not build the physical wall with Mexico, nor make his southern neighbors pay for it, since the cost of the remodeled areas and the little that was new took it out of the pockets of U.S. taxpayers, the restrictions he imposed on immigration have more than made up for that fence and it will have to be seen how the coming administration undoes them or how the judiciary keeps them in check, but he owes it to the Latino population and to the dream of millions of undocumented people that Trumpism turned into a nightmare.

In any case, Biden, whose motto was to recover “the soul of the nation,” faces an enormous challenge because that nation is divided and not precisely by a line of the color of the parties, but one that puts liberal democracy in check, with the promotion of distrust towards government institutions, the press, science and the electoral process itself.

Biden, on the other hand, was forced to wink at American progressivism and within the Democratic Party and must also comply with them, or at least try to do so, and there are not a few matters to approve of, nor are they easy.

Among them are education – only with the insurmountable debt of the university students will he have a good headache -; public health, which the Covid-19 has called into question, should introduce universal public insurance; organized labor, when unemployment reaches millions of Americans, hit by the closing of businesses of all sizes and sectors of the economy, and where the demand for the minimum wage will return with force.

Taxes cannot be absent from that list – when the reductions executed by Trump served to make the richest people benefit highly from 60 percent – and now it could not fail to benefit those with the lowest incomes, workers, ethnic minorities, women, immigrants.

A 180-degree turnaround is now mandatory on key foreign policy issues and on relations with allies, friends, and even adversaries. A field in which Trump has sown tensions and economic wars.

In some cases it will be “easy” for him, such as returning to the Treaty of Paris, the World Health Organization, restoring civilized exchanges with his allies in the European Union and NATO, among others.

Not so with respect to Iran, China, Russia, even Latin America, where renewed airs of sovereignty are returning in some countries and with them of integration.

How much it will maintain from the policies of sanctions, from the commercial wars, established with high tariffs that not only confronted the US with the Asian Giant and other adversaries, but also political and strategic allies for that vision of fierce business competition that prevailed for four years in the White House.

Will Biden be able to respect the right of the Palestinian people by reversing Washington’s embrace of Netanyahu’s apartheid?

There’s plenty of room to cut through, and we’ll have to wait for the new president’s first steps. One thing is certain: 2021 will not provide an answer to all the uncertainties, since the Covid-19 will continue to implement rules.

However, the clouds of four years of trumpism will not be easy to clear. Economist and columnist Robert Reich has said that the most vile legacy that Trump will leave is the acceptance of its behavior, and practically half of the American population seems to be enrolled in that list.

1 year ago Juventud RebeldeJoe Biden, Trump, US politics0
Winner of the impossibleMemories of January