Home We Don’t Give Up Touching the Stars

We Don’t Give Up Touching the Stars

Though the Path May be Challenging,
We Don’t Give Up Touching the Stars

Eight million Cubans gave their support to what is, since last February 24, the Supreme Law of our society, protected by Martí’s dream of a Republic of exceptional humanism.
February 23, 2020 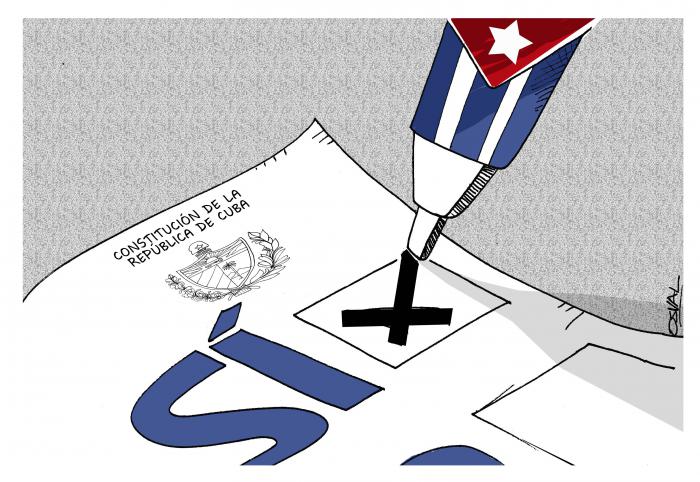 A year has already passed, and if it were necessary to define it in one word, there is no other more explicit word for it than “transcendental”. Twelve months of incessant work since, having once again the dream that Martí left us of a Republic of exceptional humanism as a shelter, more than eight million Cubans gave their support to what is, since last February 24, the Supreme Law of Cuban society.

The approval of a more advanced constitutional text was not only reliable proof of the continuity that has marked the evolution of our revolutionary process, but also the starting point for an intense and challenging work stage.

The Guidelines, the Development Plan until 2030 and the Conceptualization of the Cuban economic and social model showed us that the Cuba of these times was demanding transformations to make our social system more sustainable, developed, proactive and, therefore, more just and richer in opportunities. For that, a new Constitution was undoubtedly necessary.

However, the collective consensus for the structuring of the Magna Carta, its approval in a referendum and its proclamation on another historic date, April 10, laid out a path, directed in two essential directions. First, the approval of a whole legal and regulatory framework that would allow for the implementation of its content. Second, on the one hand, the reordering of the structures of the State and the Government, so that they are more functional, efficient and objective in pursuit of a supreme goal: the growth of our country on all fronts.

These have been, during this year, unrenounceable goals, sustained with discipline and order, on a par with the permanent confrontation with the sickly policy of the United States Government against Cuba, and the countless tensions arising from it.

The essential task of legislating

During 2019, the Cuban Parliament has had an intense legislative year. Several laws have already been approved by our deputies, in accordance with the provisions of the Constitution itself, and in view of the need to regulate certain processes that are indispensable from the social and economic point of view.

During the first ordinary session following the proclamation of the new Magna Carta, three of these invaluable legislative texts came into being: Act 127 or the Electoral Act, Act 128 or the Act on the National Symbols of the Republic of Cuba, and Act 129 or the Fisheries Act, the latter of which was passed for the first time in Cuba.

Logically, our current Magna Carta includes important changes in the constitutional order. Its first transitory provision determines that within six months after its entry into force, a new Electoral Law had to be approved by the National Assembly, of course, in order to first guarantee the structuring of the Electoral Councils at all levels and the subsequent election of the new figures described in the constitutional text, and which therefore did not correspond to what was regulated in the previous law of October 29, 1992. Likewise, it includes, as is logical, the procedures for the election of already known figures such as deputies, delegates to the Municipal Assemblies of People’s Power and the direction of these.

For its part, the Law on National Symbols will make it possible, as it explains, to resolve the problems manifested in the regulations in force until then. At the same time, it makes the use of these symbols more flexible to a certain extent, in accordance with the interests of Cuban citizens.

In the case of the Fishing Law, its second Por Cuanto makes clear “the objective of establishing the management of fishing resources under the principles of conservation, sustainable use, the precautionary approach, the implementation of scientific-technological criteria and the protection of ecosystems, in correspondence with national and international norms and the principles of food security and sovereignty so that in a progressive, flexible and effective manner, the implementation of the Cuban fishing policy is guaranteed.

Ahead lies an arduous task of legislation, the complexity of which is reflected in the timetable approved for that purpose, with a total of 70 regulations between laws and decree-laws up to 2023, and another 24 from that year until 2028. All of them, without a doubt, are aimed at the optimum organic functioning of the Cuban nation.

Structures more functional and tempered at the present time

The first month of the year brought with it two closely related processes that contribute not only to strengthening the structures of the State, but also to achieving a greater level of protagonism of the territories in decision-making, the search for local solutions to problems, the transit towards more horizontal processes that involve reasoning and assuming strategies in accordance with the closest reality, as well as in the advance towards municipal autonomy.

First, the delegates to the municipal assemblies of People’s Power throughout the country elected the Governors and Vice-Governors in their respective provinces. Later, they also approved, at the proposal of their presidents, those who already hold the posts of Quartermasters. Each one of these figures, with attributions gathered within the Magna Carta.

However, this step was preceded by others, which involved changes at the highest levels of leadership in the country and in the National Assembly of People’s Power (ANPP) itself, the highest governing body of the State, which elected from among its members its President, Vice President and Secretary, who are in turn members of the Council of State.

The essential reason for this decision is that the Council of State is the body that represents the anpp in the inter-sessional periods and is accountable to the anpp for its activities. Although it has the power to adopt decree-laws, which may be essential for the conduct of certain processes in the country, these must be ratified by the National Assembly at its next session. Its powers are clearly defined in the Constitution.

This body is also responsible for the election of the President and Vice-President of the Republic. The former is elected from among its members, with an absolute majority vote, for a period of five years, and is also accountable to it. The second, elected in the same way, fulfils the powers delegated or designated by the President.

Although this text offers a brief summary of the different steps that have been completed as part of the materialization of constitutional budgets, the true essence of each of them and their impact within society goes much further than the legal language or the terms that make up a document of the rank of a Constitution.

The reality is that everything achieved so far, and what is still on the table, which is not at all negligible, has an unquestionable protagonist: the people, and with that profound popular essence it has been executed. Let us never forget that the deputies represent even the most humble of Cubans, those who live in the most intricate area, those who are still very young or those who are already combing their hair.

Nor should we forget that the fact that we approved the Magna Carta in a constitutional referendum, and that we enriched it with our criteria, in a broad popular consultation, also means that the majority supports the processes arising from its chapters and sections.

This has been, above all, a year of learning, of understanding that transformation is a top principle in order to develop, grow and broaden the horizons to which we aspire. Everything we do together, with that conviction of “thinking as a country”, is reverted to the benefit of you, me, our family, the people we love and who are privileged to live on this Island.

Our Apostle showed us from the infinite greatness of his person and the undeniable depth of his word, that one does not climb the stars on flat roads, and from that wisdom we interpret, therefore, that if the engine that moves us is will, no matter how rough the road, it is not impossible to reach them, with the accurate guidance of our leaders.

2 years ago GranmaCuban Politics0
Bernie Sanders, the Most likely Democrat Bet in America Against TrumpHumor, Parody and Other Tricks vs. Patriarchy