Home We Ask Forgiveness of the Cuban People

We Ask Forgiveness of the Cuban People

A delegation composed of more than 50 Americans and called by the organization Code Pink, conducted an intense program of visits to communities in order to talk with the Cuban people. 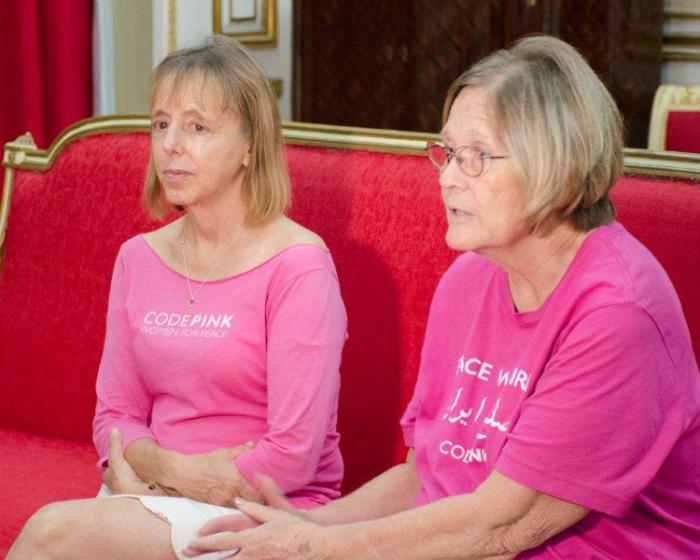 Pacifists Medea Benjamin (left) and Ann Wright are active in ending the blockade of Cuba and defending other just causes around the world. Photo: Orlando Perera

A delegation composed of more than 50 Americans and convened by the organization Code Pink, carried out an intense program of visits to the communities with the purpose of talking with the Cuban people.

One of the founders of the solidarity group, Medea Benjamin, said at the headquarters of the Cuban Institute of Friendship with the Peoples (ICAP) that she felt pain for the setback in bilateral relations between the United States and the island. She felt the same because of the actions of Donald Trump’s administration, mainly the intensification of the unjust blockade and the activation of Title III of the Helms-Burton Act.

“We are facing an economic war and it is being practiced against countries like Venezuela, Nicaragua, Iran, and others, which are not to the liking of the White House. This is a form of pressure from the Trump administration to change governments. That president must obey international laws and respect the sovereignty of the people,” warned the peace activist.

She called the foreign policy implemented by the current presidency in Washington dirty: “This is an election year. They (the right-wing) want to take over the majority of Florida’s votes. This is why they are taking measures that have nothing to do with the well-being of Cubans,” she said, mentioning the names of Congress members Marco Rubio and Mario Rafael Diaz Balart as the most sinister characters in this type of political game.

She said she was part of the group that occupied Venezuela’s diplomatic headquarters in the United States to save it from the representatives appointed by self-proclaimed President Juan Guaidó. “We stayed several weeks living inside the embassy, fighting against very aggressive people, mainly right-wing Venezuelans living in the U.S. We have been taken to jail, we have been threatened, but we remain firm in proclaiming that our government cannot recognize a president who has not been elected by the people. It cannot give a facility to people who have no real power to carry out consular procedures. Nor do they have the right to decide for the Venezuelan people and elect a president of their own choosing,” said Medea Benjamin.

Also, in the last few weeks, members of the Code Pink group have visited Bolivia, because it hurts them to see what is happening in that country, after a coup d’état carried out by fascists, who privatize resources and sell the people’s goods. “We must defend Evo Morales, because he has been the first indigenous president, a symbol not only for Bolivia, but for worthy people all over the world, including the United States,” said the human rights defender.

She stressed that the main task of the Code Pink group on this issue is to report on events and show evidence of the White House’s involvement in overthrowing legitimate Latin American governments. The organization was born on November 17, 2002, and works to end wars and occupations by the U.S. government, to challenge global militarism, and to redirect resources to finance arms and military supplies to health, education and employment programs.

With her came Ann Wright, a retired and ex-colonel and diplomat. She had been against the war in Iraq in 2001 and other wars sponsored by her country. Today she is a peace activist and speaks out against the foreign policy of the U.S. government.

She believes that the relationship with Cuba has changed for the worse, and said she is very concerned about the decisions of the Trump administration. “We’ve talked to many people in the communities and members of  non-governmental organizations, also with the accountants about the impact of the sanctions on their lives. We feel a sense of sadness and ask the people of Cuba to forgive us for what our government is once again doing.”