Home US seeks a reason for war against Cuba

US seeks a reason for war against Cuba

U.S. seeks to fabricate a reason for war against Cuba

The U.S. Government threatened Cuba on Monday with the application of new sanctions. 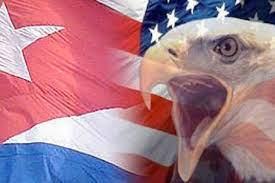 U.S. seeks to fabricate a cause of war against Cuba Photo: Taken from Prensa Latina

The U.S. government threatened Cuba on Monday with the application of new sanctions “if repression and human rights abuses do not cease”, days before the provocation orchestrated from Washington for November 15.

In recent days, one after another, high-ranking officials of that government -this time it was the turn of State Department spokesman Ned Price- have publicly brandished the cudgel, recalling the era of the gunboats and the Platt Amendment, when a slight gesture from their proconsuls was enough for the presidents of the neo-colony to rush to comply with the orders of the White House.

None of this is casual. A veritable machinery of infamy, lies and provocations is at work against Cuba with the aim of fabricating a casus belli.

The general director of Press, communication and image of the Cuban Ministry of Foreign Affairs, Juan Antonio Fernández Palacios, denounced the use of social networks, especially Twitter, in the manipulation campaign promoted from the United States with the aim of destabilizing the country.

“A powerful machinery of communicational toxicity in the digital space greases its army of bots and trollers for the frontal attack to which they have set a date,” said the Cuban official from his Twitter account.

Mr. Agustín Antonetti, political operator and “expert” in black campaigns financed by the continental and U.S. right-wing, announced on Monday on Twitter: “All those who fight for the freedom and democracy of the Cuban people, get ready for what we are going to release tomorrow, it is going to be a news item that will be covered by the main international media”.

The hate campaign has no limits. They announce actions against the Cuban government in more than 90 cities around the world, they need to build a negative image of the Revolution that will clear the way for them to commit any ignominy.

They need to achieve through a systematic campaign of motivational influence, pure and simple, a psychological war; to turn Cuba into a prostrate nation, broken in its foundations, without joints, without a soul. But little do they know the Cubans, here they will find a people erect over the yoke they want to impose on us, proud to exhibit to the world, girded on their foreheads, the star that illuminates and kills.